Windows Vista and 7 gadgets threat fix: Park and taken for a ride: Chinese day at the beach: Nice pair of melons: and the Goat Man.

Yet another wet/dry, cold/cold, windy/calm start to the day at the Castle this morn, but it looks as if I may be able to do a bit of vandalism in the garden later.
Orf out early tomorrow so no post, and the interweb thingy is still behaving like a spoilt child and his Maj keeps bringing me frogs... 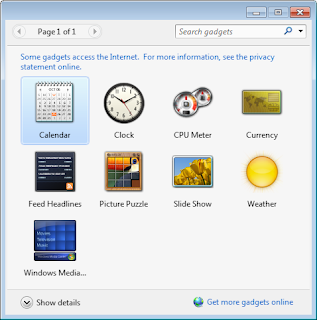 
Microsoft has issued an urgent security warning to all Windows 7 & Vista users: apparently you must disable the Desktop Gadgets feature immediately.

It turns out that hackers have discovered a security flaw in the Desktop Gadgets subsystem, which can allow them to take over your PC, if you install an infected Gadget.

Gadgets, in case you aren't sure, are the small desktop tools which display the weather forecast, large clock and so on  your desktop. In Windows Vista, these Gadgets sit in the desktop sidebar on the right-hand side of the screen. Windows 7 has no sidebar, so the Gadgets 'float' on the desktop.


You can add and remove Gadgets via the Control Panel

The attack allows a malicious Gadget to run with the same privileges as your logged in user account, so if you are an administrator they can take over the whole machine. According to Microsoft, "Gadgets installed from untrusted sources can harm your computer and can access your computer’s files, show you objectionable content, or change their behaviour at any time".

Microsoft originally intended the system to be expanded by third-party developers, so that, for example, Facebook could provide a gadget that allowed you to keep an eye on your status. But, because of the threat posed by this attack, Microsoft has now closed down their site that allows you to find and install third-party gadgets.


To prevent this type of attack, you need to disable the feature in the registry. Before applying a registry fix, first create a backup of your registry by following the steps here:
Press [Windows Key] + [R], type REGEDIT and click OK.
Go to file on the top of the registry, click on export and save somewhere you can find it again.


Next, apply the fix as follows:


Right click on Policies, select New, select Key, and then type Windows as the key name.


Right click on Windows, select New, select Key, and then type Sidebar as the key name.


Reboot your system to apply the fix.


With the fix in place, you will of course no longer be able to use the Desktop Gadgets you have installed, but this is a small price to pay for the security the fix will bring you.

Microsoft has removed the Gadgets feature completely from Windows 8, so if you are using a test version of that operating system you don't need to worry about the problem.


Simples-ish, sort of.......I did the “fix” above and the interweb thingy seems to have sorted itself out?


All over pay for everything Blighty 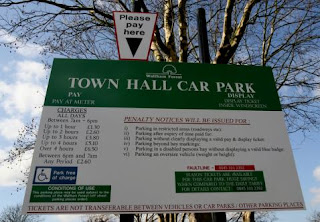 It seems that Councils made more than half a billion pounds profit from parking last year, despite warnings that they should not treat motorists as “cash cows”.
Authorities in England and Wales saw their surplus from parking rise to £511.6 million in 2010-11 from £489.4 million a year earlier, according to an analysis of local authority accounts by the RAC Foundation.
Town halls are supposed to use their powers to control parking to improve traffic flow and prevent gridlock on their streets.
They are prohibited from using these powers to bolster their income. However, many councils seek to get round this by earmarking the cash raised for other transport projects.
Currently motorists can be fined up £130 in London and £70 outside the capital for parking offences. Ministers are considering a plea from councils to increase the fines. The RAC Foundation figures show that the Tory-run Westminster council in central London made a £38 million profit from parking. Drivers now have to pay £4.80 an hour to park on the street in prime spots, such as near Oxford Street.
Outside London, Brighton, where motorists can wait more than a year for a residential parking permit, racked up a £12.7 million surplus, with drivers in the centre of the city now paying £3.50 an hour. Stephen Glaister, director of the RAC Foundation, said: “Local authorities need to be transparent about how they spend these 'profits’ and demonstrate to drivers that the money raised is being used to make their lives easier, not more difficult.”
Peter Box, chairman of the Local Government Association’s economy and transport board, defended councils.
“Parking charges and fines are an essential part of keeping traffic flowing, pedestrians and motorists safe and deterring irresponsible drivers,” he said.

East to the place where space is at a premium


Although we on our more than slightly damp island have only managed about one day this year to meander to the seaside over in China it seems that the pastime is quite popular. 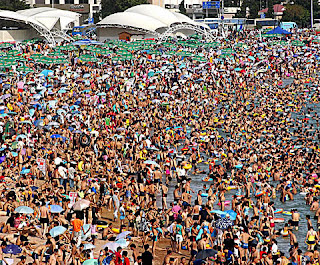 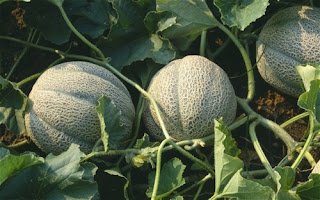 Fruit has always been one of the higher-priced commodities in Japan. A single apple, for example, can cost 1,000 yen (£8). A package of 20 cherries will run you 8,000 yen (£64).
However, it seems that the value of melons has gone down this season.
Yubari, a city in the north famous for its enticing, wonderful melons, has started a bit of a craze.
In the most recent harvest, two particular melons caught the attention of everyone, for their perfectly circular form and an evenly patterned rind. The set of melons, weighing 4 kg, were auctioned at a relatively lower price than the highest paid melons ever, reflecting the still unstable economic climate.
In 2008, the most expensive pair of melons was sold at a whopping price of 2.5 million yen (£19,000).

That’s nearly as dear as my favourite retailer... 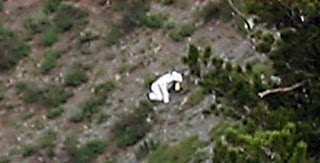 Allegedly A man spotted dressed in a goat suit among a herd of wild goats in the mountains of northern Utah has wildlife officials worried he could be in danger as hunting season approaches.
Douglass said a man hiking Sunday along Ben Lomond peak in the mountains above Ogden, about 40 miles north of Salt Lake City, spotted the person dressed like a goat among a herd of real goats. The person provided some blurry photographs to Douglass, who said they did not appear to have been altered.
Coty Creighton spotted the goat man Sunday during his hike. He said he came across the herd, but noticed something odd about one goat that was trailing behind the rest.
"I thought it was a deformed goat," Creighton told the Standard-Examiner of Ogden. "It was clumsy, not nimble."
He said he pulled out binoculars to get a closer look at the herd about 200 yards away and was shocked. The man appeared to be acting like a goat while wearing the crudely made costume, which had fake horns and a cloth mask with cut-out eye holes, Creighton said.
"He was on his hands and knees, crawling along the mountainside," he said. "Something was definitely off with that guy."

That’s it: I’m orf to do a bit of Iron Fertilisation in the moat