Get your finger out CHunt: Look to Home: Thighs the limit: Precision walking: Belgian old fart GPS Numpty: and the DeLorean hovercraft:

Not a lot of lack of cold, even less atmospheric movement, just as much white fluffy stuff and less solar stuff than you could fit in U-Turn Cam’s “brain”, just returned from the stale bread (£1.45) gruel (94p a tin) and his Maj’s food run dahn Equine Tesco, managed to avoid all the knob heads that have to drive at ten fucking miles an hour on perfectly clear and safe roads who stop at every roundabout whether it is clear or not.


If “they” are that scared of a bit of wet and cold then they should get out of their motors and walk so that the rest of us can proceed at a decent pace to where we are going.


And talking of useless CHunts 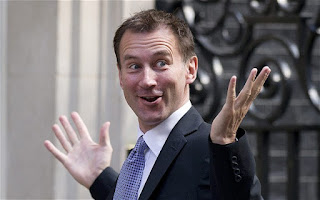 The ‘Elf Secretary reckons that a forthcoming report on standards in the NHS would provoke “a huge debate” about poor standards of care and the absence of “compassion” on hospital wards.
While the scandal at the Mid Staffordshire NHS trust represented the worst of the problem, “everyone can sense that there are little bits of Stafford dotted around the system”, Mr CHunt said.
His comments come 10 days before he is due to receive the final report from the public inquiry, conducted by Robert Francis QC, into standards of care following the Mid Staffs scandal.
Stafford hospital was exposed in 2009 after regulators found that between 600 and 1,200 patients died unnecessarily after suffering appalling standards of care.
Patients were found in their own excrement, thirsty and without pain relief, while in A&E it was left to receptionists to assess which cases were urgent and who should wait.
Official figures showed that there were 70 cases of surgery being conducted on the wrong parts of patient’s bodies in 2011-12, and 161 foreign objects being left inside patients after operations. In total, 326 “never events” occurred during the last year, almost one a day.

Jezza CHunt said he had been dismayed by the number of so-called “never events”, such as the wrong limb being amputated, or the wrong implant being fitted, that take place in the NHS.

Not as fucking “dismayed” as the poor bastards on the receiving end Jezza... 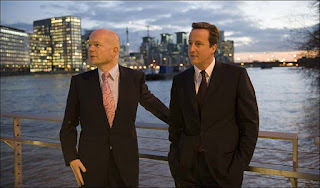 Where half a dozen Brits sadly got killed by “terrorists”, and reckons that the world must respond with "iron resolve" to the terrorist threat, fair enough and condolences to the families but we do have more pressing problems in Blighty-the item above for a start which is happening every day not once in a BP moon, but at least Silly Billy has got his 15 minutes of fame.

Time this “government” got its priorities right. 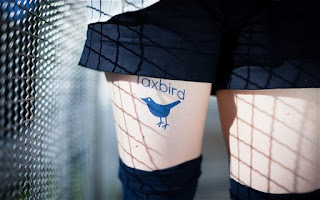 Has come from a Japanese “marketing” firm that is recruiting girls to promote companies by wearing sticker adverts…on their thighs, the gap between the hem of a short skirt and the top of a long sock is apparently called ‘zettai ryouiki’ in Japanese, which roughly translates as ‘absolute territory’.

Still in the land of “slanty eyed yellow bastards” (quote from Prince Phil the Greek)
Another fad is “Precision Walking” where a load of tosspots walk about in formation while being shouted at by an even bigger tosspot.
Otherwise known in Blighty as military drills....
Back in what is left of Europe 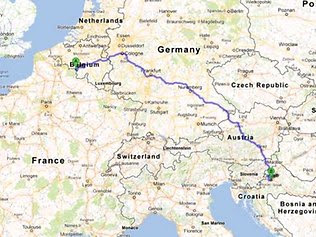 A Belgian woman drove for nearly 1500 kilometres through six countries before realising her car navigation system had "gone wrong". Then she had to drive all the way back.
Sabine Moreau, 67, left her home at Solre-sur-Sambre to pick up a friend from the train station at Brussels.
The journey was meant to last just 61km, but she took a wrong turn and ended up 1500km away in Zagreb, Croatia, the UK's Daily Mail reported.
It's believed she drove through France, Germany, Austria and Slovenia on the way.
She passed traffic signs in different languages and stopped to refuel her car several times and get some sleep, but didn't stop to question the Tom-tom sat-nav until 60 hours later when she realised she may not be in Belgium anymore.

A police spokesman from Belgium said it was "an incredible story" and said the woman did nothing wrong.

Handles about as well as it did on the road...

That’s it: I’m orf to check out my helix 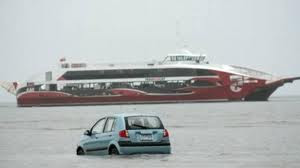 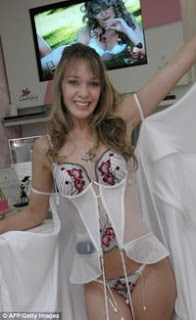