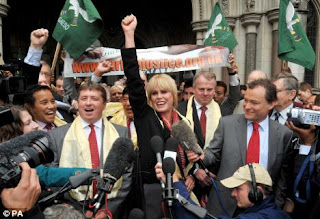 All Gurkha veterans will be given the same right to settle in Britain, ministers will announce on Thursday.
The statement will confirm a significant political victory for campaigners led by the actress Joanna Lumley.
Gordon Brown, the Prime Minister, is expected to signal the new policy in the Commons today, with a formal statement from the Home Office on Thursday.
The Prime Minister earlier this month suffered a humiliating Commons defeat when Labour MPs voted with the Opposition to condemn immigration rules that curb the number of Gurkha pensioners allowed to settle in the UK.
The vote followed a growing chorus of public and political anger against Government refusals to allow Gurkhas who retired before 1997 to settle freely in Britain.
Ministers, officials and lawyers were last night still working on the precise detail of the new policy. But sources said that the new rules will be enough to satisfy the central claim of Gurkha campaigners like Miss Lumley.
Government lawyers have warned that extending settlement rights to the oldest Gurkhas risks setting a legal precedent that could give the foreign veterans of other wars – such as the Second World War and Korea – a chance to claim residency in Britain.
In particular, ministers fear that the descendents of Gurkhas and other veterans could claim residency rights, and tomorrow's statement is likely to contain careful restrictions on the rights of Gurkha relatives and dependents.

Absolute bollocks, well done Joanna, and good luck to the Gurkhas, the state we are in at the moment we might all move to Nepal.

Angus Dei-NHS The Other Side
Posted by Angus Dei at 12:04 0 comments