Warmish, wettish, cloudyish and calmish at the Castle this morn, spent most of yestermorn gathering “stuff” for the recycling centre, think I need a bigger car...
And the electric fence has been erected around the moat to prevent water tealeaves-the only snag is that the butler has to power it with the cyclegen...

Allegedly some plod are not very law abiding

More than 900 police staff abused their access to confidential databases over a three-year period, it has been claimed.
The research findings from civil liberties group Big Brother Watch (BBW), which cover 2007 to 2010, were described by BBW director Daniel Hamilton as "astonishing".
Two hundred and forty three staff and officers received criminal convictions for breaching the Data Protection Act (DPA), and 98 lost their jobs, a freedom of information request revealed.
Many of the searches included background checks on friends and potential partners, but the information was also at times used in a far more sinister manner.
Mr Hamilton said: "Some have been convicted for passing sensitive information to criminal gangs and drug dealers. This is at best hugely intrusive and, at worse, downright dangerous."
The findings follow allegations that Andy Coulson, who served as David Cameron's communications director at No 10 for four years, paid the police in order to receive privileged information.
Emails handed over by News Corp appear to show that Mr Coulson, then News of the World editor, authorised payments made by staff to police.
A News Corp spokesman told Vanity Fair: "It is correct to state that new information has recently been provided to the police.
In Merseyside a combined total of 208 police officers and staff faced internal disciplinary action for "viewing a computer record relating to a high profile arrest."
Meanwhile in Lancashire one member of police staff was found guilty of disclosing confidential policing information on Facebook, whilst another received just a written warning for conducting 53 criminal record checks "for no obvious policing purpose".

Up to the place where water is abundant

Sightings of a creature not dissimilar to the Loch Ness Monster have caused a stir in the normally quiet waters of the Lake District.
Local swimmer Tom Noblett, world record holder in fresh water swimming, thinks he was within feet of the creature whilst out for a morning swim.
Photographer Linden Adams also claims to have seen the creature and has captured it on camera.
The picture is now being analysed by experts in forensic visual computing.

If it’s Nessie on its hols, I hope it has a passport... 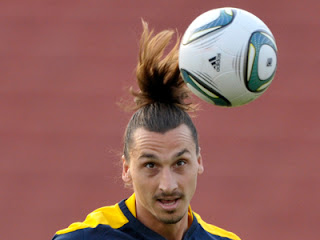 Apparently desperate mums are cutting off and selling their own hair to make ends meet in hard-up Britain.
The craze for extensions fuelled by Jordan and Britney Spears has led to dealers paying £150 a time for 20inch plaits of human hair.
And women struggling to cope with rising prices and a lack of jobs are chopping off their own locks as they look at new ways of ­making money.
Single mother-of-two Hayley Harding, of Leeds, sold 14 ­inches of her brown hair last month for £70. “Losing my hair was tough but it freed up cash for my kids,” she said. “Having children can be very expensive and cutting my hair off has allowed me to buy them music books.
“I’d much rather my kids get what they need than me walk around with long locks that could be worth money. It is about your priorities, I guess.”
Rosemary Looker, 48, of Newark-on-Trent, Notts, sold 19in of her brunette hair for £60 after she was made ­redundant. “I’ve always had hair below my waist and when I lost my job friends suggested I make some money out of it,” she said. “It helped pay bills. Things are so tough; I might have to do it again.”
Teacher Sarah Winfield got her ­hairdresser to cut 15in off her dark brown hair and sold it for £65 after her boyfriend lost his job. “I’ve always liked my long hair,” said Sarah, 25, of Lincoln. “But it was a no-brainer when I realised cutting it off would help pay some of our bills.”

Right to the place where people live in cars for months 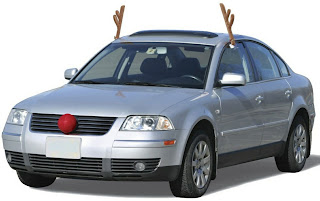 A driver in the far north of Norway found an inventive way to transport his reindeer: he packed three in the back seat of his car and two in the trunk and drove off, The Local Norway reported.
None was wearing a seatbelt.
The Local said police were astonished to spot the antlered heads in the back seat of the Subaru Forester and then find the other two in the luggage compartment.
The unidentified driver claimed he had received clearance from the Norwegian Food Safety Authority to transport five of his reindeer from Karasjok to Børselv, a journey of some 62 miles (100 km).

Glad I didn’t have to clean the car out afterwards.... 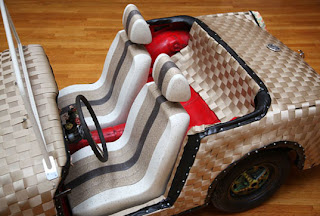 Ann Conte and Jeanne Wiley have managed to renovate an old, beat-up car, by weaving it a new body, out of seat belt material.
The two artists set their sights on a 1960′s MG Midget that was used as support for firewood, in an American backyard. Their project was all about “recycling, reusing, repurposing and sustainability” so they decided to give their Midget a woven look. And what better material to use, than overstock seat belt material (over 500 yards of it). After weaving the body, the two simply bolted it to the car’s metal skeleton.
The seats of this woven vehicle are made of a partially recycled material, known as Corian Terra, and the headlights and tail lights are handmade ceramic. Conte and Wiley’s recycled car can be admired as part of a new exhibit at the South Shore Art Centre, in Cohasset, MA.


The ironic thing is that it doesn’t have any seatbelts…

Dahn a lot to the not very warm place 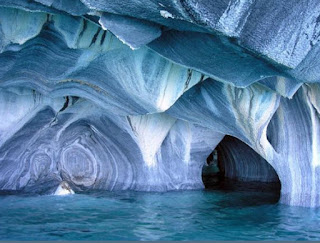 In Chile the Marble Caves, or Cuevas de Mármol, are allegedly one of the most exhilarating and stunning caves to be found anywhere in the world.
The caves, made entirely of marble, were formed when water penetrated the huge blocks of rock and carved them in such a way that they formed beautiful caves and tunnels within the rocks.
Tourists can take a boat ride through the inner tunnels with a local tour company.


Reminds me of gobstoppers.... 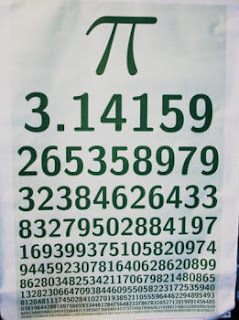