Bog snorkeler, Dearer cuppa, Arachnophobia, a Numpty of the first order and Is Jesus on mars

Yesterday I received my “voting registration” form, with the normal threat “”You are required by law to give the information asked for on this form”, and ‘You could be fined if you give false information or do not register’ which gets you in a cooperative mood.

Anyway I usually do it on the internet, but I see this year they have a free phone number so I thought I would give it a bash.

Then we got “enter the first part of your identification code NOW!”, then “enter the second part of the identification code NOW!” I am sure you have gotten the idea by ‘now’, this carried on for about four minutes asking for my birth date NOW, and culminated in “do you want to make any changes to your entry in the edited version of the electoral roll, you vill press 1 NOW!”

That was when I decided to hang up, I think I managed to register to vote but by the end of the “conversation” I was so nervous that I am not sure, I suppose I will find out when they send the Red Guard round to arrest me, and drag me off to the prison in Smolensk.

And there was me thinking that they were on my side. 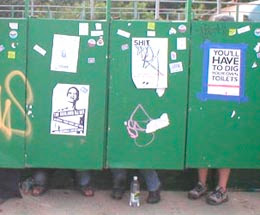 18 year old Charlotte Taylor dropped her handbag into the toilet at a music festival, tried to retrieve it and was wedged face-first for a stomach-churning 20 minutes before fire-fighters pulled her free.

She said: "I kept saying to myself, 'Oh my God I can't believe this is happening. It can't be real.'
"My bag had my phone, train ticket and all my money in it, so if I left it I wouldn't have been able to get home and I would have been stranded.

"I put one hand down but I couldn't reach so I put the other one down too to try and grab it.
"But I was straining so far down that I got wedged." She added: "My shoulders were stuck on both sides and I couldn't move at all.

"I was struggling and trying to get out and itjust made it worse. I knew I couldn't get out myself and was so embarrassed."

But Charlotte faced further embarrassment after they then hosed her down in front of hundreds of festival-goers.

She added: "All of my friends were laughing at me when I told them what had happened.”

"Throughout the rest of the weekend I could hear people talking about it.”


Would you do it? 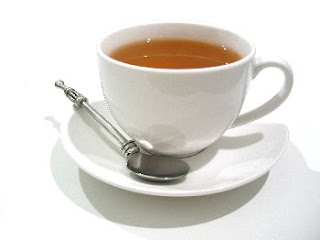 The price of a cup of tea could be about to rise as a worldwide shortage sends wholesale prices up.
Dry weather in Kenya, India and Sri Lanka has hit crops leaving supplies short. Production in some areas is down 15%.
"All in all we reckon we are about 80,000 to 90,000 tons of tea short in the world tea market now," said Bill Gorman from the UK Tea Council.
And with demand growing as supplies fall, the cost of leaf tea at auction is being pushed up.
At one sale in Kenya last month prices for the highest quality tea were said to have risen by more than a third.
In this country, the retail price for the nation's favourite has already increased by more than 10% this year.
"Where a box of 80 tea bags in the UK only rose about 10p from 1999 to 2009 because of over-supply of tea, now that oversupply has gone we are starting to see those prices rising again," said Mr Gorman.
Tea is one of the key items which attracts shoppers into supermarkets and the big stores are giving money-off deals and buy-one-get-one-free offers to make up for the rises.
But not all retailers will be able to follow suit and it is not expected to be long before higher prices filter through.
The only thing that could stop the cost going up would be a much needed rainfall.

What with global warming and all the rain we get maybe there’s a gap in the market in our green and sodden land. 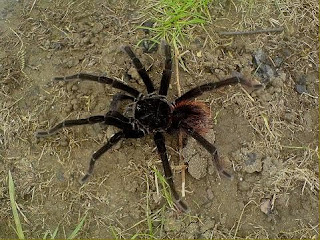 Women who run for cover when coming face-to-face with a spider have been offered a new explanation for their phobia: it is in their genes.
Research at a US university found females associate the eight-legged critters with fear more than males, most of who react with indifference.
Psychologist Dr David Rakison from Pittsburgh's Carnegie Mellon University tested 10 girls and 10 boys, all aged 11-months, with pictures of spiders to see how they reacted.
He showed them images of a spider next to a fearful cartoon face and a spider next to a happy face.
Dr Rakison's report, published in the New Scientist, states that the girls looked at the picture containing a happy face for longer than the scared one.
However, the boys looked at both images for an equal amount of time.
He concluded that the girls found the happy face puzzling as they were expecting to see the spider paired with a frightened face.The psychologist said these tests show that girls have a genetic predisposition to fear the arachnids in contrast with boys who do not.
"The experiments show that female 11-month-olds - but not males of the same age - learn the relation between a negative facial expression and fear-relevant stimuli such as snakes and spiders," Dr Rakison reported in the journal Evolution and Human Behaviour.
He linked the difference in results to our hunter-gatherer ancestry when he says women had to be wary of dangerous animals to protect their children, whereas men used more risky behaviour in order to be successful hunters.
Past surveys have shown that almost 6% of the population have a phobia of snakes and around 4% are scared of spiders.
However, women are around four times more likely to be affected than men.
Men now have no excuse but to help a woman in need when next summoned to remove an unwelcome visitor from the bath

On your bike, no way I am getting close to a big de-daw.
Every body needs good neighbours 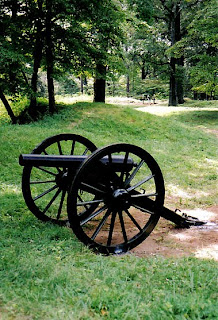 Sadly these people haven’t:
A history buff who recreates firearms from old wars accidentally fired a cannonball through the wall of his neighbour's home in Pennsylvania.
William Maser, 54, of Georges Township, fired the two-pound cannonball on Wednesday evening outside his home that ricocheted and hit a house 400 yards (365 meters) away.
The cannonball, about two inches in diameter, smashed through a window and a wall before landing in his neighbour's closet. Authorities said no one was hurt.
State police charged Mr. Maser with reckless endangerment, criminal mischief and disorderly conduct.
No one answered the phone on Friday at Maser's home.
He told WPXI-TV that recreating 19th century cannon is a longtime hobby. He added that he was sorry about the damage and would stop shooting them on his property.

But the worst thing is that they let the Numpty keep the bloody cannon. 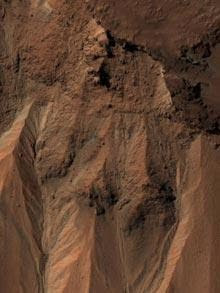 Yet another “amazing” picture from Mars, up till now we have had the ‘alien head’ the ‘alien monolith’ and now Jesus:- If looked at from the right angle – and with disbelief suspended – this photo released by Nasa can appear to show the face and robed body of Christ.
The image was taken by a camera on NASA’s Mars Reconnaissance Orbiter on August 3 and published this week the view shows gullies near the edge of the Hale crater on southern Mars.
It remains to be seen whether the discovery will prove as lucrative as past examples.
In 2004, a decade-old cheese sandwich allegedly bearing a likeness of the Virgin Mary was sold to an online casino for nearly £15,000 and helped shift hundreds of T-shirts depicting the sandwich.
No it bloody doesn’t, it looks like Michael Jackson shaking hands with Elvis, and if you believe that I have a log that looks like Marylyn Monroe for sale.