Many many minus numbers on the liquid metal gauge, layers of scrapey scrapey stuff, not even a whimsy of atmospheric movement and just a hint of dawn’s crack at the Castle this morn.


Son of a B....aronet and alien reptile in disguise 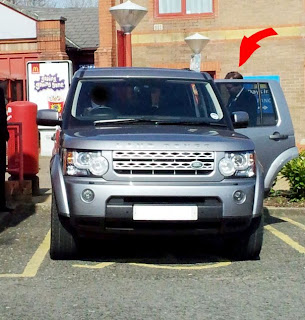 George (I’m not in it at all so fuck you) Osborne allegedly did not realise a car he was travelling in was parked in a disabled bay at a motorway service station-according to Aunty.
The Daily Mirror published a photograph of the chancellor getting into a Land Rover parked in the marked bay at Magor services on the M4 near Newport.
But a Treasury source said Mr Osborne had been dropped off to buy lunch.
The unmarked police Land Rover was not driven by the chancellor at any point, added the source.
The incident is understood to have taken place on Wednesday as the chancellor returned from a speaking engagement at a nursery in Cardiff.
The Treasury source told the BBC the chancellor had got into the car and left the scene without realising that it had been parked in the bay.


East to the land of Vietnamese 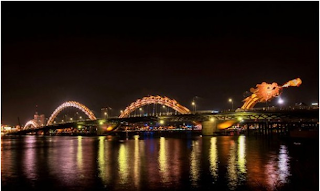 Opened on March 29, the 38th anniversary of the liberation of Da Nang City, the 666 meter long, 37.5 meter wide bridge has six lanes for traffic and two pedestrian sidewalks. The steel arch bridge weighs up to 1,000 tons, making it the biggest in the whole world.

But that’s not all. The Dragon Bridge is outfitted with a modern lighting system that includes 15,000 Philips LED lights that make it brilliantly change colours. In addition, the dragon is capable of releasing bursts of fire or sprays of water from its mouth.

Rubbery, or should that be jubbery….. 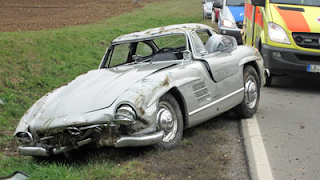 A hapless mechanic is facing a £500,000 bill after pranging a customer's prized classic Mercedes sports car on an unofficial test drive.
The rare 1954 300SL sports car - with its distinctive gull wing doors - had been left at the garage in Pleidelsheim, Germany, for a routine service.
But mechanic Gilsroy Mansen, 26, couldn't resist taking it for a spin and lost control of the 220 bhp vehicle on a bend, say police.
Witnesses say the collector's car - capable of 161 mph - rolled over several times when Mansen skidded trying to overtake another car at high speed.
"To everyone's astonishment, not least the driver's, he walked away without a scratch, which is a testament to how well these old cars were built.
"The driver was more worried about what he was going to say to the owner than he was about himself," said one police crash investigator.
"But sadly the car is in a very sorry state, pretty much destroyed.


"Any ordinary vehicle would be a write off but because this is so rare this mechanic can expect a very large repair bill," they added.


Hope the Numpty has insurance.....

East to the land where Turkeys don’t come from 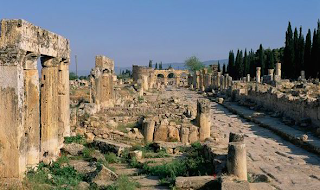 Allegedly archaeologists have unearthed the remnants of an ancient mythological cave, ominously described as being the ‘gate to hell.'
The team behind the dig located the portal recently in the ancient Phrygian city of Hierapolis –referred to as the entryway to Hell by Cicero and Greek geographer Strabo.

As the Greek philosopher explained in his writing, the entrance of the cave spews noxious vapours that kill anything in their path.

"Any animal that passes inside meets instant death," he wrote.

"I threw in sparrows and they immediately breathed their last and fell."
This space is full of a vapour so misty and dense that one can scarcely see the ground," he added.


Upon excavation of the site, archaeologists also found Ionic semi-columns that had inscriptions of dedication to the deities of the underworld, Pluto and Kore.

Priests, who would have been hallucinating under the influence of the fumes, would sacrifice bulls to Pluto by leading the animals into the toxic cave, before dragging them out dead, the archaeologist explained.

“We could see the cave’s lethal properties during the excavation,” D’Andria said.

“Several birds died as they tried to get close to the arm opening, instantly killed by the carbon dioxide fumes.”


And they blame us for global warming...


East to the place where tea used to come from 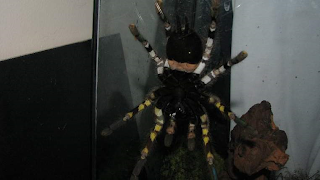 Scientists have “discovered” a bloody great big venomous Tarantula which is apparently the size of a human face, its legs, which have unique daffodil-yellow markings, span a massive 20cm (eight inches). The arachnid also has a distinctive pink band around its body.
The new species was found in the war-torn north of the South Asian country by scientists from Sri Lanka's Biodiversity Education and Research (BER) organisation.
It has been named Poecilotheria rajaei, in recognition of a senior police officer called Michael Rajakumar Purajah, who guided the research team through a hazardous jungle overrun by civil unrest in order to seek out the spider.


I think you would need a roll of wallpaper to sort that one out....


That’s it: I’m orf to reboot the ‘Petaflop’ computer 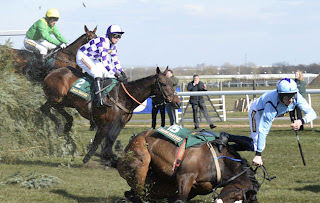