Health and Safety, Ton up Harry, another lunatic, Feral Pigs and M&S

Weather is a bit better today, and so am I, and I didn’t grunt or oink once, but I have this hacking cough; must give it up: coughing I mean. 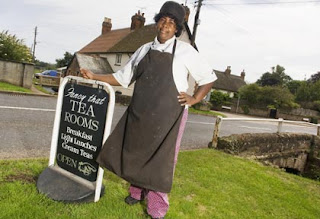 Down in East Budleigh, Devon the Jobsworths are at it again, Mrs Voce ran a tea shop and as you do she put a sign out advertising the fact.

The sign was on an embankment with no footpath, and for a year all was happy in the cream tea paradise.

Until Devon County Council appeared on the scene and told her to remove it because of “health and safety” or to be exact “ a potential hazard to pedestrians”.

Within days of taking it down she saw her takings slump to just £8 a day, Mrs Voce, 46, said she is being left with no option but to close the Fancy That Tea Shop in the village of East Budleigh, Devon, with the loss of five jobs.

A spokeswoman for the council said: "The Highways Act guidance says that no unauthorised items, such as advertising boards, should be displayed on the pavement.

"But in Devon our policy is more flexible; we do allow authorised displays on the pavement so long as they are immediately in front of the business.

"However in areas where the pavements are not that wide it can pose a potential hazard to passersby. The council has asked businesses in East Budleigh to take in their displays and most have done so willingly." 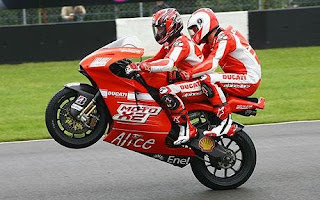 It seems that flying helicopters doesn’t give prince “H” enough of a buzz, so he hitched a ride with acclaimed motorcycle driver Randy Mamola at Donington Park.

He clung to Mamola as the 13-time GP winner pulled a wheelie in his Ducati before setting off on two high-speed laps of the Leicestershire circuit during a break in the racing.

Onlookers were amazed to see him pull on red protective leathers, boots and a helmet to test out the track at Donington, where he was attending as the guest of a friend.

A Royal spokesman said: ‘It was a private day out. The prince had a friend going to Donington and jumped at the chance to go."


Still you are only young once and I suppose he could put Gran in a sidecar. 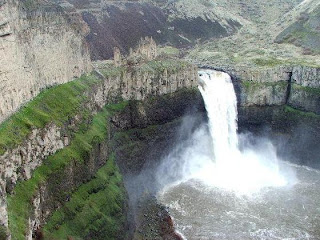 American kayaker Tyler Bradt has set a new world record by plunging 186 feet over a waterfall in Washington State.

Pictures have emerged showing Mr Bradt as a tiny speck in a red canoe perched on the edge of the falls.

He was then swallowed up by the raging torrent of water which cascades down the side of the mountain. The waterfall is so high the spray it generates causes its own rainbow.

After landing at the bottom, Mr Bradt sank 20ft under the water and stayed submerged for seven seconds before he resurfaced, triumphant.

The only injury the 22-year-old suffered was a sprained wrist and a broken paddle as he fell for four seconds over Palouse Falls before reaching the bottom.


Shame that, it could have knocked some sense into the pillock. 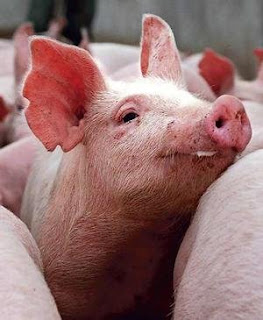 Florida has its fair share of “nasties”-alligators, snakes and other assorted beasties, but the latest threat to humankind is SUPERPIG!

The 150lb animal has survived being shot with tranquiliser darts and a taser stun gun since it appeared in a park in the Cove neighbourhood of Panama City.

A group on the social networking site Facebook, called "the Pig of the Cove" and so far boasting 429 members across the US has chronicled the pig's movements.

Officials of Bay County Animal Control have been trying to apprehend it since February, but it has remained free - as its supporters would have it, snorting contemptuously at the shackles of government.

"Is the pig a symbol of our desire to live free of government controls?" asked Mary Sittman, a Facebook follower and estate agent, last week.

She said that the pig's independent streak appealed to people in the largely conservative region in the Florida Panhandle.

Other Facebook followers suggested it should be named the Freedom Pig though others have dubbed it Wilbur.

Animal control officials are less enthralled by the visitor.

They insist that they are not trying to kill the animal but only want to catch it before it hurts itself or someone else.

Officials said the pig charged them last Monday and nearly gashed their legs.

A day later, they managed to shoot it with four tranquiliser darts but said the pig simply looked as if it had had "a couple of good shots of tequila".

Animal control officers complain that their efforts have been hampered by people tampering with the traps they set for the pig.

"It's not easy. You have a 150-pound pig with an attitude," said Jim Crosby, director of Bay County Animal Control.

More than 500,000 wild pigs are now estimated to live in Florida.

Experts believe they are the descendants of European pigs introduced to Florida by the Spanish in the 16th century.

Although they prefer to run from danger, they can be aggressive when cornered and can cause serious injuries with their tusks.

How cuddly will they think it is when they all start coughing and sneezing? 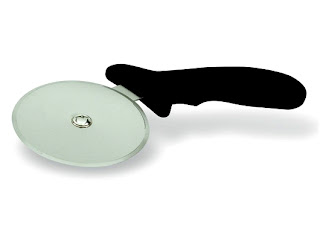 Marks and Spencer in Derby have demanded that a 28 year old shopper provide proof of her age before they would sell her a pizza cutter.

Jenny Palmer was asked for her ID at the checkout after she went to the retailer's Derby store to buy the £1.50 item.

"I'm only two years off my 30th birthday and hardly look like I'm going to go out and physically harm someone," she said.

"I told the checkout woman I was buying it because I was moving into a new house, but she said her screen was telling her to ask for ID. I think she could have used some common sense. I can't believe I had to go through all of that just to buy a pizza-cutter, of all things."

M&S insisted its employee was right to demand proof of age from Ms Palmer under the 'Challenge 25' policy.

Staff are required to ask for identification from any customer who tries to buy alcohol or a bladed item and appears younger than 25.

Yes, I have the same problem.

Angus Dei-NHS-THE OTHER SIDE
Posted by Angus Dei at 06:37 4 comments