Oodles of solar stuff, vast amounts of lack of warm, not even a threat of wet stuff and even less atmospheric movement at the Castle this morn.


The butler has been out collecting fat, carbon neutral teenagers for the furnace, the garden is still in need of a middling fettle and the Honda is dustier than the dustiest thing you could think of.

Allegedly a cure for the lack of hirsute heads 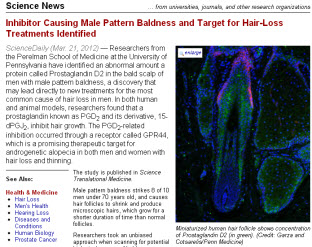 Could be on shelves in two years, scientists are already talking with pharmaceutical firms about making the product, which would work by stopping the effects of a single guilty enzyme.
US-based dermatologists announced earlier this year that they had found that an enzyme, called prostaglandin D2 (PGD2), instructed follicles to stop producing hair.
They identified it by screening 250 genes implicated in hair loss.
George Cotsarelis, head of dermatology at Pennsylvania University, said the one responsible for levels of PGD2 played “the major role”.
He said he was now talking with several drugs firms about creating the anti-baldness product.
About four in five men will experience some degree of baldness by the age of 70. In bald patches follicles are still making hairs, but less well than before. The hairs get shorter and shorter until they are either barely visible or do not even break the skin’s surface.


And about bloody time... 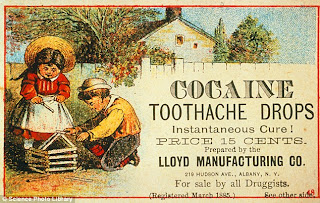 Cocaine - and other drugs like morphine - were routinely used in remedies for coughs, colds and toothaches as a cure-all magic ingredient in the Victorian era.
Long before the drugs were criminalised - and prior to the regulation of both medicine and advertising - the substances were frequently touted as effective treatments for illnesses as serious as cancer and liver disease.
All the products were once readily available over the counter and millions rushed to snap them up around the world in the late 1800s.
One advert for Ozone paper urges buyers to ignite its special paper and inhale the smoke to cure their asthma and bronchitis.
While Dr Seth Arnold’s Cough Killer’s campaign showed a young girl clutching a puppy - but contained high levels of Morphine.
Another ad dating back to 1885 advertised its 'instantaneous cure' for toothache - using cocaine.

How times have changed-or not....

Allegedly there is a monster in Siberia 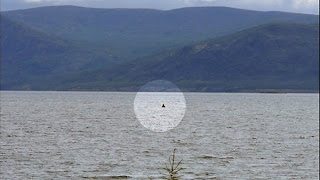 Locals call it the Devil. They say it lifts up boats and wails when it attacks. Now underwater sonar shows they might be telling the truth.
Lake Labynkyr is located 5000 kilometres east of Moscow. It is 60 kilometres away from town of Oymyakon – the coldest place on earth. But while every other lake in the area becomes an ice-skating rink in winter - this lake does not freeze over. Ever.
It also has no plant life.
Associate Professor of Biogeography Lyudmila Emeliyanova told The Siberian Times that on her mission to Lake Labynkyr in remote Siberia she recorded 'several seriously big underwater objects' with sonar readings.
So convinced is she that there is something down there that she has called for a new scientific mission to solve the mystery of the monster.
"It was our fourth or fifth day at the lake when our echo sounding device registered a huge object in the water under our boat," Ms Emeliyanova told The Times.
"The object was very dense, of homogeneous structure, surely not a fish nor a shoal of fish, and it was above the bottom. I was very surprised but not scared and not shocked, after all we did not see this animal we only registered a strange object in the water. But I can clearly say - at the moment, as a scientist, I cannot offer you any explanation of what this object might be."


West to the Big Apple 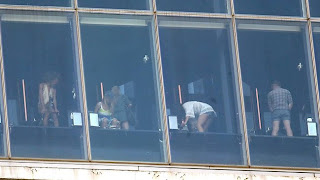 A New York hotel has become famous - for its toilet windows which enable people outside to see guests 'doing their business'.
Restroom users at the Boom Boom Room club on the 18th floor of the The Standard Hotel are completely visible from the street below.
The 10-foot, floor-to-ceiling windows give users fantastic views of the Manhattan skyline - but the visibility works both ways, reports the New York Daily News.


Still in the home of steam and the land of bubbles

“Scientists” have come up with a way to boil water without making bubbles based on the on the Leidenfrost effect
To stabilize a Leidenfrost vapour film and prevent bubbling during boiling, Patankar collaborated with Ivan U. Vakarelski of King Abdullah University of Science and Technology, Saudi Arabia. Vakarelski led the experiments and Patankar provided the theory. The collaboration also included Derek Chan, professor of mathematics and statistics from the University of Melbourne in Australia.
In their experiments, the stabilization of the Leidenfrost vapour film was achieved by making the surface of tiny steel spheres very water-repellent. The spheres were sprayed with a commercially available hydrophobic coating — essentially self-assembled nanoparticles — combined with other water-hating chemicals to achieve the right amount of roughness and water repellence. At the correct length scale this coating created a surface texture full of tiny peaks and valleys.
When the steel spheres were heated to 400 degrees Celsius and dropped into room temperature water, water vapours formed in the valleys of the textured surface, creating a stable Leidenfrost vapour film that did not collapse once the spheres cooled to the temperature of boiling water. In the experiments, researchers completely avoided the bubbly phase of boiling. …


That’ll come in handy in the kitchen...


Dahn a bit to the Lone Star State 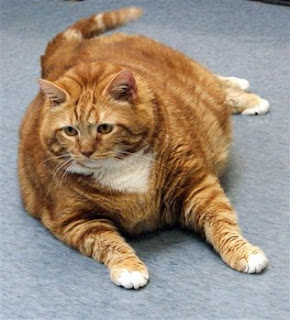 Skinny the cat isn’t and all 41 pounds of her needs a home.
A Dallas-area animal shelter has cared for the 5-year-old orange tabby since getting a call about a stray in a yard about a week ago.
Kim Chapin with Richardson Animal Services said Friday that Skinny's "very sweet" - and the largest cat she's seen in 21 years with the shelter.
Not surprising. U.S. government growth charts show Skinny weighs about as much as the average 4-year-old child.
Chapin says Skinny appears healthy except for being overweight and likely having diabetes. Blood tests have been ordered.

Chapin says somebody apparently had been caring for the cat but officials aren't sure who owned the huge kitty.


That’s it: I’m orf to print a few lasers
And today’s thought:
You are not as bleedin sorry as we are... 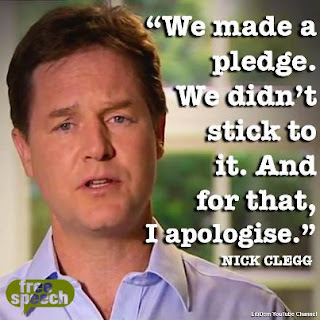