First a point to make on the blogosphere: Most bloggers I have come across have been good people, intelligent, friendly and helpful, but there are some that do not fall into those categories.

I am not having a whinge here, but there are some that pretend to be “nice” and then decide that they don’t want to know, the reasons for which are not clear.

That is fine, it is their prerogative if they don’t want to visit or comment, but what really pisses me off is that when I visit their blog and make a non abusive, supportive comment it is deleted or not posted at all.

And yes I know it is my choice not to visit or comment, and from now on I won’t, but at least give me a reason, reply to my message and talk about the problem-you know who you are. 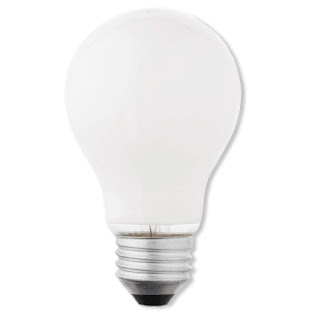 Germans, who sometimes see themselves as guardians of the environment, are hoarding energy-guzzling incandescent light bulbs ahead of a looming European Union-wide ban, the GfK market research agency said.

The Nuremberg-based GfK reported sales of incandescent bulbs had soared about 35 percent in the first half of the year ahead of a ban that starts Tuesday -- even though it was proposed by German Environment Minister Sigmar Gabriel in 2007.

Some German retailers said they have seen sales of 100-watt incandescent bulbs soar 600 percent since the end of July.

The EU is planning to phase out use of the incandescent bulbs as part of its push to save energy, cut greenhouse gas emissions and fight climate change. From Tuesday the light bulbs above 75 watts can no longer be produced or imported in the EU.

The ban will be expanded each year and by 2012 production and importing of all incandescent bulbs will be prohibited.

The idea to ban incandescent bulbs came from Gabriel in 2007 when Germany held the EU's rotating presidency. The German said the switch to energy saving bulbs could save about 25 million tonnes of CO2 emissions per year.


So the rest of the EU will be sitting in the wan yellow light of “eco bulbs” while the country that brought in the ban basks in the bright light of incandescence. 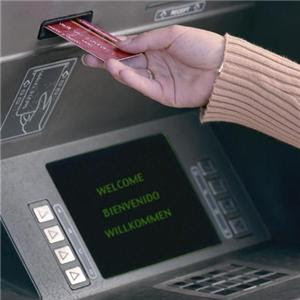 Tesco seem to have so much money that they are giving it away; LUCKY shoppers enjoyed an ­unexpected windfall when a Tesco cash machine gave out double the amount of money requested.

Amid the credit crunch the faulty machine was a stroke of luck no one was going to ignore and word spread like wildfire.

Thousands of pounds extra were taken out before the glitch was spotted by the supermarket famed for its slogan “Every little helps”.

Within minutes, customers had phoned their friends and family and a lengthy queue formed outside the ­Tesco Express ATM in Cranford, Hounslow, west London.

Local businessman Imran Mirza said: “I was fourth in the queue when I heard the man at the front telling someone on his mobile that the machine was paying out ­double. The person in front of me managed to take out double too.

“The news spread like wildfire and within an hour there was a queue getting on for 50 people.
“Some people were there at the machine for five minutes at a time taking out as much as they could on their different cards.

“I checked an hour and a half later and people were still getting double money.

“It was only when I had a look five hours later that the machine said it was ‘out of order’.”

A Tesco spokesman said the ­supermarket closed the machine as soon as it was made aware of the fault last Thursday evening.

He said: “This was thankfully an extremely rare operational ­error. We will not be trying to ­recover the money.”

In April, investment banker Joanne Jones and husband Darren were convicted of stealing £61,400 from a faulty HSBC machine at a Waitrose store in Billericay, Essex. 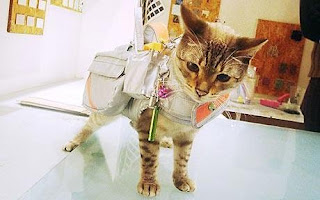 Animal lovers living in earthquake-prone regions can now buy special kits to ensure the survival of their most cherished pets should the earth begin the tremble.

Manufacturers Oyagokoro, from Japan, have released three types of earthquake packs for dogs and cats of different sizes.

In the case of an emergency, pet-owners can relax. The kit contains a padded jacket and rain hat, special boots to protect paws, and aromatherapy oil to soothe stressed out cats and dogs.
Also included in the pack - which doubles as a carry case for smaller pets - is a waterproof ID capsule with the animal's details and a bell should they become lost in rubble.

Food, water and bowls for feeding and a muzzle to prevent spooked pets from biting rescuers also feature.

Laurel Stavros, 29, from Hawaii, USA, is Vice President of Rinkya Inc, which distributes the kits worldwide.

She said: "Although it may seem odd to have a special kit for your pet, most are part of our families, so really this kit makes sense in that it helps to protect your precious dog or cat.

"Japan is certainly known for their love of pets, with many choosing to get a pet over having children.

"They dress them up in expensive clothes and push them around in prams. In 2006, dogs outnumbered children age 10 and under in Japan."

The product comes in Ultimate, Basic and Life styles and range from £100 to £400. Owners are encouraged to keep an item of worn personal clothing in a section to let panicky animals smell it and be calmed as buildings collapse around them.
Yeah right. 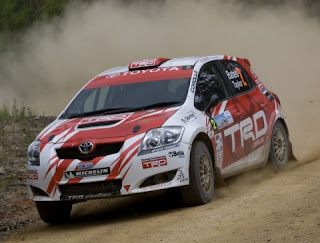 Police say dead koalas and other frozen road kill may be used to disrupt the Australian leg of the Repco World Rally Championship in the Tweed Valley tomorrow.

Head of the Tweed-Byron police, Superintendent Michael Kenny, told local media protest groups rallying against the racing event would be watched closely after rumours began circulating about the use of dead animals, the lighting of fires and people lying across the track.

"Some of the bizarre things are that there is road kill been put in freezers that is going to be thrown on to the road during the event," Superintendent Kenny said yesterday.

"That's a rumour at best but I'm saying there are a lot of stories going around about this sort of madness that may or may not occur."

Protest groups No Rally and Kyogle-based 7th Generation oppose the rally on environmental grounds, claiming it will frighten off wildlife and disrupt the areas breeding season.

They are also angry at legislative changes passed by the New South Wales Government to lock in the event for the next 20 years.

No Rally has so far collected 705 signatures on an online petition.

Repco Rally Australian chairman Garry Connelly told The Northern Star event organisers were undeterred by the road kill threat and would employ a "unique" road tracking system that could detect if any animals had been run over by rally cars.

"Other rallies have had threats from time to time, but I don't think they've ever had the threat of a frozen koala being thrown on a road before. That is really bizarre, but you have to expect the unexpected," he said.

"That sort of thing will be easily detected. We have put in place a unique technology for the World Championship, in fact for motor sport - a unique road tracking system in relation to wildlife that may be injured during the event and we will have a very solid and conclusive, proven method of determining any road kill or any animal that is injured and we will be recording that and that will be in our report."

Superintendent Kenny said placing anything on the track or lighting fires to obscure the drivers' view would put lives at risk. The Riot Squad and police in helicopters would be among 150 officers on hand for the event, which runs from September 3 to 6.

"We respect the right of people to protest but so long as they are not putting anyone in danger," he said.


And finally:
Jobs but no houses

From OZ. Welfare groups in the Northern Territory say the housing shortage there is now so bad they are giving out tents to homeless families.

Darwin house prices have gone up by 20 per cent and units by 17 per cent in the past 12 months, and the city is the most expensive capital in Australia to buy a home.

Somerville Community Services chief executive Vicki O'Halloran says they have been giving out tents to the needy for a long time.

But she says the crisis is now so bad it has run out of tents to hand out.

"We find it particularly embarrassing to have tents as the only alternative," she said.

"On the other hand if it is a roof over people's heads at the moment, as opposed to living in their car or a shop front, then it is an alternative."

St Vincent de Paul says it has moved needy people interstate because of the lack of emergency accommodation in the Top End. It has also given out swags to the homeless in desperation.

"We're seeing people who some have jobs some have an income and own a car and aren't suffering from any addictions and so forth, but simply can't access affordable housing."

"We've got the elderly people who are nervous, they're frightened, they're living in fear because they haven't got secure accommodation," she said.

"I've got one client who is living in a shed at the moment and he's in his 60s, we've got a family that's living in a tent with a new baby - they've just brought a new baby home. They've got two or three other children."

One homeless man, who wants to be known only as Jack, has been living rough for several months.

Fifty-year-old Jack says there are many other families and working people in the same situation.

"I've known a few people from my home town who've come up here - tradesman and construction," he said.

"Jobs? Not a problem, no they can get a job in two days and they enquire about rental a unit and they go 'you're bloody joking mate, you're kidding'."


Maybe they should come here, we have plenty of houses but no jobs, mind you it would be one hell of a commute.