Unite For Hunger And Hope 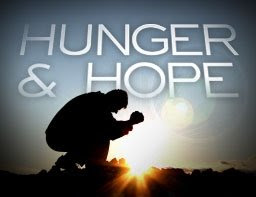 I am really late today, didn't hear the alarm, the kettle blew up, and the cat shat in one of my boots because I hadn't cleaned out her dirt box.
So just a normal day, anyway: today is "Unite for Hunger and hope" day over at Bloggers unite http://www.bloggersunite.org/event/unite-for-hunger-and-hope
Right now, more than 500 million people are living in "absolute poverty" and more than 15 million children die of hunger every year.
• World Health Organization estimates that one-third of the population is underfed and another third is starving.
• Even in the United States, 46 percent of African-American children and 49 percent of Latino children are considered chronically hungry.
So what can we do? well I can write about it, there are 564 other bloggers doing the same thing, the food is there it is just a matter of getting it to the right people, I think that because of the recession people are a bit "charity shocked" and causes such as this tend to be put to the bottom of the list.
But there are kids in this country that are starving, and we don't realise, so if you can just put the picture on one of your blogs and write a short blog, you never know.
"There are only two ways to live your life. One is as though nothing is a miracle. The other is as though everything is a miracle." Albert Einstein
Angus
NHS Behind the headlines

NHS-THE OTHER SIDE
Posted by Angus Dei at 08:19 0 comments