A modicum of lack of warm, minimal skywater, minus atmospheric movement and masses of cloudy stuff at the Castle this morn, the butler is out collecting fat, carbon neutral teenagers just in case, his Maj is out hunting worms and there will be no post tomorrow-doing several things.

Apparently Son of a B.....aronet and alien reptile in disguise George (I can’t find my arse in this dark room because the torch is broken) Osborne is thinking about giving us 300-400 squids worth of RBS (which we already own) “shares”, or phased disposal or attempts to place the shares in the market – allowing the public to invest their own money in the company but at a discount to the share price at the time.
Now: I am confused because “we” gave RBS £45,500,000,000 (without our knowledge) so that the employees could continue to get their nice big salaries and bonuses and we could suffer cuts in welfare, ‘Orspitals, council services and benefits,


And now “they” want to give us a pittance back because “they” don’t have a hope of putting RBS back into the private sector and recouping our money,


According to “A senior government source” (probably the cleaner at No 10):


"There is a realisation that there is no prospect of RBS's share price rising to the level at which we bailed the bank out and it's not good for the bank or the Government to hold on to our stake indefinitely. Obviously a give-away to taxpayers before the election, who after all paid for it in the first place, is very attractive."


In 2008 the Government invested £45.5bn in RBS to prevent the bank from collapsing. RBS shares closed last night at 344p, well below the 500p average at which taxpayers bought their 82 per cent stake. Last night's closing price equates to a £14bn loss.


Which is why I am so confused because “taxpayers” didn’t buy an 82 per cent stake in the Royal Bank of wankers the piss poor millionaires club coalition did on our behalf and now they want us to take a £14 billion loss because they can’t do their sums.

Anyone else confused about this, or is it because they want to orfload this millstone in case Norf of the border gets its independence?

And staying with confusing things 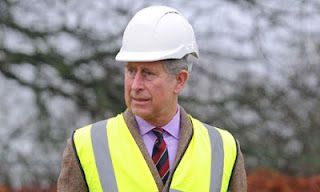 Allegedly the Prince of Wales was secretly given a say over dozens of new laws, including those to ban hunting and to introduce the Government’s green deal, the Government has revealed.

A Freedom of Information request disclosed that the Prince has been consulted on an average of three laws every year over the past 11 years. In all he was consulted on 33 laws over past 11 years, far higher than previously disclosed.

Some of our laws that he was arsed about were:

The Energy Bill in September 2011, which passed into law the Government’s green deal which encourages homeowners to take out a loan to make their house more energy-efficient

The Hunting Bill in July 2003, the same month that MPs voted on a free ballot to ban hunting with dogs in the UK.

The Licensing Bill in June 2003, which was criticised for legalising 24 hour drinking after it came into force in November 2005.

And the Land Registration Bill (February 2002).


It seems that being the heir to the Throne old nag loving Charlie is allowed under Britain’s constitution to be consulted on legislation that might affect his private interests.


Oh well as long as he can continue to keep his fifteen serfs, and thousands of acres of Blighty then that’s alright then.


Norf of the not yet free border 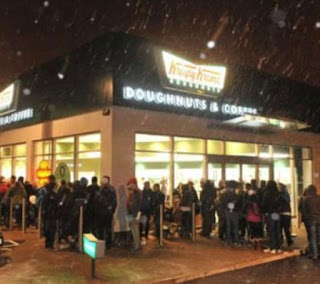 The opening of the first Krispy Kreme store in Scotland caused traffic chaos as thousands turned up for the chance of free doughnuts.
Before the store in Edinburgh had even opened its doors at 7am, more than 300 determined people had already braved the elements and formed a queue outside in the driving snow. Staff served doughnuts to 400 sweet-toothed customers in the first hour alone of the store being opened, but bosses didn't anticipate the feverish popularity of the launch at the Hermiston Gait shopping centre - with traffic queuing on approach roads, including the M8 motorway and A720, for hours on end.


Dahn a bit to Warwickshire 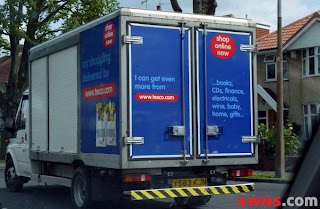 My favourite retailer Tesco has been hit by another PR nightmare when a horse died after being hit by one of its delivery van drivers.
The crash happened as the supermarket remained at the centre of the horsemeat scandal after traces of horse were found in products labelled as beef.
The Tesco delivery driver hit the hunting horse while it was being exercised in the village of Little Kineton, in Warwickshire.
The exact circumstances are unclear, but the van somehow crashed into the back of the horse, breaking its leg.


The horse, named ‘Miller’, had to be put down following the accident


It was then put in the back of the van and taken to the nearest Tesco supermarket (only joking)-(I hope). Bunnies have been wreaking havoc on cars parked at Denver International Airport - eating spark plug cables and other wiring.
The furry creatures have already caused thousands of dollars in damage as wildlife official’s work to solve the problem.
"I see at least dozens every morning," airport shuttle driver Michelle Anderson told KCNC-TV. "They go hide under the cars and the cars are warm."
A spokesperson from an automotive service centre said the rabbits are chewing on the insulator section of the vehicles' ignition cables, which can lead to hefty repair bills.
The station reported that wildlife workers are removing at least 100 bunnies a month while parking companies build better fences and perches for predator hawks and eagles.
Local mechanics have offered a more unorthodox solution for worried car owners.


They say coating the wires with fox urine - available at hunting shops - will deter the creatures.


Got an hour to waste this weekend


Then watch the video, I lasted about thirty seconds before I lost the will to live...


That’s it: I’m orf to mine the moat for antibiotics


And today’s thought:
Oh I say-nice norks, good job there’s not a law against it 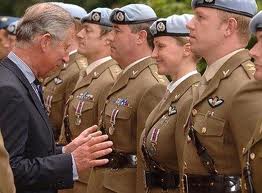