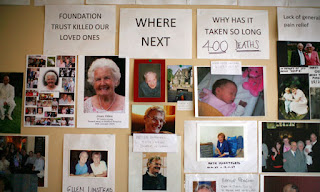 After many years and unbridled effort from relatives and carers Robert Francis QC has managed to produce about a couple of thousand pages of “report” and quite a lot of “recommendations” regarding the Mid Staffs Massacre and the rest of the ailing NHS.


Apparently patients who were killed and tortured by lack of water, food, medication and being left to lie in their own faeces and urine were treated thus not because of piss poor treatment but “a systemic failure”, and according to Robert Francis QC “it is clear that the primary responsibility lies with the Trust Board but he is also adamant that scapegoating individuals would be a mistake. To do so merely allows others to duck responsibility. The main purpose of the Inquiry was to learn lessons for the future rather than perpetuate a cycle of 'defensiveness and concealment'.”


And goes on to say that “At the core of the failure was a culture of defensiveness to complaints and a lack of openness. Management was distracted by organisational churn and meeting targets rather than seeing what was happening to the patients in their care.”


Interesting but bollocks, as with “Ms” death at the hands of an almost Foundation Trust (at the time-2005) the “blame” was put on “system failures”-NAH:


These aren’t “systems” they are people who should and do know better, they are so called “professionals” who are happy to take the kudos and money but lack basic humanity and morals.


I don’t accept that no one should be held to account, forget the NHS “complaints” system which never worked and never will, forget the RCN and the piss poor GMC, what we need are criminal prosecutions, not for revenge or “scapegoating” but justice, if I held someone against their will and starved them, left them in agony and abused them until they died I would be hauled up before the beak at a rate of knots, so what is the difference between that and nurses and doctors who took oaths not to do harm treating the old and sick in the same way.


We need a purge, it is time to hold all those gutless, cruel, uncaring killers to account, prosecute the murdering bastards, don’t just strike them off from the “registers” throw them in prison for the statutory sentence they deserve, and bring charges of corporate manslaughter against the CEO, the board and all the other managers that allowed the culture of see no, hear no, speak no evil to propagate.


The Hospital allegedly has “a vision”:


Our Vision is to be recognised as the safest & most caring Trust in the NHS. This vision sums up everything we want to achieve and supports the Trust’s 5 strategic Themes which continue to be the focus of our effort and measurement of improvement.


Creating a culture of caring


Seeing zero harm as our target by keeping patients safe


Listening, responding and acting on what our patients and community are telling us


Supporting our staff to become excellent: giving responsibility but holding to account as well

And let’s not forget that this isn’t an isolated case, torture and murder are rife in our NHS, your local Foundation Trust is killing patients as you read this, mothers, fathers, sons, daughters, brothers and sisters are dying because of lack of “care”, bad decisions by doctors and nurses, the focus on financial targets instead of care of the sick, the need to cover up, lie cheat and deceive so that they can continue to advance their careers, the old boy’s GMC club and the “non disclosure” letters that help to keep the truth from us.


Is most of the NHS doing a wonderful job-probably, are there an undisclosed number of Foundation Trusts that manage to maim, ruin people’s lives and kill-definitely.


Is there proper redress for patients and relatives of those harmed by the “caring” professions-NAH, will there ever be-probably not; will the all pervading culture of “not my problem” change-I hope so, can we look forward to being treated with dignity, care and professionalism when we are unfortunate enough to end up in hospital-you tell me. 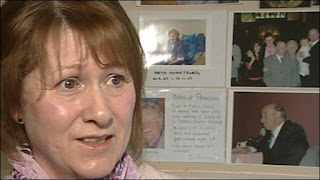 Because if it wasn’t for the efforts of Julie Bailey and others who had the balls to stand up and confront the “system” we would be none the wiser.


(normal service will resume when I can be arsed)
Posted by Angus Dei at 09:41 2 comments