Visible drizzle, invisible lack of cold, risible atmospheric movement and sod all solar activity at the Castle this morn, after the saga of the hot water debacle a while ago it has gorn tits up again, so I had a nice cold wash and shave followed by a nice warm electric shower, luckily the fat, carbon neutral teenagers inserted into the furnace are keeping me nice and warm.


Why do these things always happen on a Sunday...?


All across build it Blighty 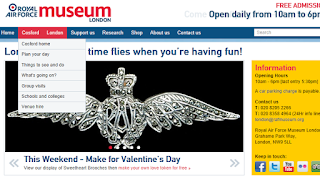 There are old farts holding onto Airfix models that they made back in the thirties, forties, fifties and beyond but now you can get a bit of use from them, the Royal Air Force Museum will chart the history of Airfix since the company began in 1939 and is due to feature kits, as well as artwork from the boxes.
However, the curators are struggling to locate several models, especially from the firm’s heyday in the 1950s and 1960s. They are seeking any toys, either still in their boxes, or fully built, from that period, either from the company’s military range, or some of its more diverse collections.
Among particular requests it has made are for: the first kit of a Massey Ferguson tractor; its first Spitfire; models from its historical figures range, which included Joan of Arc, Henry VIII, Oliver Cromwell and Charles I; ships, including HMS Endeavour — Captain Cook’s vessel — and a Hawker P1127, a prototype of the Harrier jump jet.
Although most of the toys which the museum, in Hendon, north London, wants to display should be immaculately assembled and well decorated, it also wants to feature several less successful efforts, which may have been preserved.
Airfix was founded in 1939 by Nicholas Kove, a refugee from Hungary who originally manufactured rubber inflated toys. The name was chosen because part of the process involved fixing air into products and so the company would appear at the front of business directories.
After the Second World War he switched to producing plastic combs, before the company started to produce toy kits, with the first Spitfire appearing in 1953. By the mid-1970s, the firm was selling about 20 million kits a year. But fell into decline in the 1980s as computer games became more popular. However, the company — owned by the train set maker Hornby since 2006 — still sells about 3.5 million kits a year and features up to date kits from the current conflict in Afghanistan.


You can contact the museum HERE if you are so inclined.


West to the land of pubic haircuts


The Brazilian town of Santo Antônio da Platina, spiders known as Anelosimus eximius were shot ( in the photographic sense) by Erick Reis as they showered the sky. Marta Fischer, a local biologist, is quoted as saying (translated), “…They are usually in trees during the day and in the late afternoon and early evening construct a sort of sheet webs, each makes his and then they come together. The goal is to capture insects.” She also says this phenomenon is normal.


Allegedly a second family in as little as a week has come forward with allegations that a Disneyland character snubbed them because they were black.
The White family said they took their son, Ryder, to Disneyland to celebrate his birthday in December.
The day was going well until Razzi White, 5, walked up to a performer in a Donald Duck costume at the park's Main Street.
'He was sitting there with his arms open, saying, 'Donald, Donald!' said mother Nastasia White.


Nastasia claims that rather than play with her son, Donald deliberately walked away from him to play with a white baby in a stroller.


The Whites said they waited patiently for their turn - long enough that even the baby's parents urged Donald to play with Razzi - but Donald ignored them.


Nastasia asked for picture, but says Donald instead went to a young white girl on a bench and hugged her.


Time to get the orange sauce out methinks....


East many-many imperial units and dahn just as much 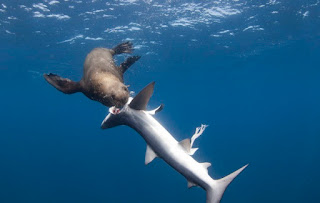 Apparently a voracious cape fur seal has been boldly snacking on large sharks; as dozens of blue sharks gathered around and gorging on an enormous ball of bait fish.
Chris Fallows said: "There were eight guests aboard our vessel; many of them seasoned wildlife enthusiasts. None had ever seen anything like this as sharks of this size are certainly not usually considered food for seals.

"In more than 2,000 expeditions working with sharks over the last 21 years, this is the only time I have ever seen a seal kill several sharks and I can find no record of such an event happening elsewhere."

The seal consumed the stomach and livers of the first two sharks, before killing three others.
And the moral-don’t mess with the seal.


Norf a bit and East a bit


Road workers have been caught on camera towing a car away in Tel Aviv - after painting a disabled parking space around the vehicle.
Hila Ben Baruch was ordered to pay £170, plus towing costs, after being accused of illegally parking in the Israeli city.
The angry motorist, who had parked near her apartment, later uncovered surveillance footage of the shocking incident and posted it on Facebook.
"You just see it and can't believe it," she wrote on the social network where the video received hundreds of likes.
"Within five minutes they turned me into a criminal. But who cares? The important thing is that Tel Aviv sucked some more blood."
Ms Ben Baruch has since received an apology from the local city hall who waived the fine after admitting it was a 'serious error'.
But that was not enough to satisfy Ms Ben Baruch who is now threatening legal proceedings.


"I don't plan to keep quiet, not even for a moment" she insisted.


That’s it: I’m orf to check out my anti-virus


Today’s thought:
Oh shit that’s not the bloke from Tesco is it? 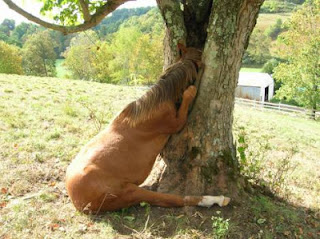 And today’s mellow melody
A bit of moon lute