SOMETHING A BIT LIGHTER

Yesterday was a bad day, so today I thought, “lets try to be a bit happier”, and so I have scanned the web for some “uplifting” stories.

There is this from the Sun-Hitler HAD only got one ball, after 63 years the truth is out, Adolf Hitler DID only have one ball, the other is not “hanging in the Alert Hall” but was shot off during a battle of the Somme in 1916.

It was just a shame that whoever shot him didn’t aim one foot higher. 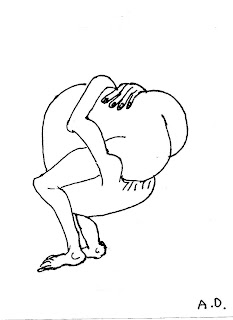 This is also from the Sun, Russell “no brains” Brand has dropped himself in the “doo” again, by making a joke about “groping the Queen” while he is in the USA.

What is the matter with this Pratt? As I said before “he is about as funny as shoving a Pineapple up your arse”-Angus Dei on all and sundry: Ross and Brand

Does anyone know if there is a spare cell in Guantanamo Bay?

Will someone please talk to this pillock and tell him to keep his mouth shut and find a job as a toilet cleaner.

I don’t normally watch these types of show, and true to form I haven’t watched this one either. But the thought of Kilroy Silk in the jungle gives me a sense of satisfaction; I believe that the public vote on who should stay or go.

So a plea to the public, Please, Please keep voting to keep Silk in the jungle.

A) To make him suffer for as long as possible and:
B) So that he can get a proper suntan and throw the bottles of wood stain away.


From the Express, a cat that clung onto a train for 100 miles, this little cat managed to survive a 100-mile journey across the Pennines clinging to a small ledge on the underside of a freight train wagon.

I don’t know, bloody fare evaders. (I love my pussy)

And finally also from the Express, Mouth almighty “Macca” has to get the permission of George Harrison’s widow Olivia to agree to release the so called “lost Beatles track”.

Yet another appeal, please Olivia don’t do it, a) because “Macca” has more money than he knows what to do with, and b) I heard the track when it was “played” 40 years ago and it is crap.