Coldish, cloudyish and calmish at the castle this morn, after almost two weeks of rest and recuperation which included five days in the four poster sniffing, sneezing, sweating coughing, farting, vomiting and expelling stuff from the rear exit; a course of non penicillin antibiotics, more than a lot of Lemsips and gallons of Tussis medicine I have finally managed to fire up the laptop and see if my one remaining brain cell is capable of stringing more than two words together.


Up in Geordie land

Where that bunch of gutless, lying, backstabbing, unelected bunch of purveyors of Wibble otherwise known as the LibDems have gathered to try to convince themselves that they are actually in power.


U-Turn Dave’s fag is apparently telling the rest of his “party” that he will soon launch the Youth Contract - a programme designed to help young people into work and slash unemployment.
Calling it a "Liberal Democrat drive for youth jobs", do dah said the £1bn scheme will help get every jobless youngster "earning or learning".
But he will also robustly defend the controversial welfare reforms, arguing that benefit claimants "owe it to the nation" to "strain every sinew to find a job".
And will insist that the financial statement later this month has to slash taxes for ordinary workers and be a "budget for fairness".
However what’s his name’s speech will contain no major new policy announcements but is expected to focus instead on "positioning" the party and outlining its achievements in Government.

That’s going to be a very short speech then.....


East to the land of the Dog’s bollocks 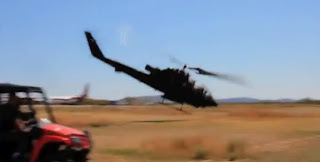 While “working” for Top Gear and supposedly filming a speeding Corvette in Korea two pilots from the film crew found themselves careering towards the ground as they lost control of their helicopter.

Captured on camera by local man Steve Esparaza, the chopper is seen nose-diving before smashing into the ground.


Luckily the pilots were able to walk away from the crash - even remembering to turn off the engine.

Hope the cost of the chopper doesn’t come out of my license fee....


West to the place where Titicaca exists 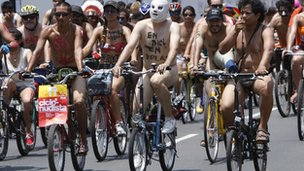 Hundreds of scantily clad and nude cyclists took to the streets of Peru's capital, Lima, to call attention to safety conditions on the city's roads.
Campaigners say that thousands have been killed on the roads because of reckless driving.
Many of the cyclists painted slogans and signs on their bare skin.

No wonder they are getting wiped out-not a helmet in sight-at least on their heads....

Back to the place where “proper” ale comes from 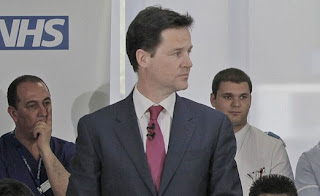 Liberal Democrats at the party's spring conference have decided not to vote on the future of controversial health reforms.
Members voted not to take an emergency motion which urged the withdrawal of the Health and Social Care Bill, which is nearing the end of its passage through Parliament.
Campaigners against the NHS changes won enough support to have their "kill the Bill" emergency motion debated on Sunday at the party's spring conference in Gateshead.
But, under the party's alternative vote system, the attempt failed on second preferences.
Instead a rival motion on the same Bill that calls on Lib Dems to support the changes was selected.
That was put forward by Baroness Williams, who initially had opposed the proposals.

Couldn’t organise a vote in a ballot box....

That’s it: I’m orf not to buy a Raspberry Pi