Dawns crack is massive, not a whimsy of atmospheric movement, much lack of cold and massive residue of sky water at the castle this sweaty morn.

It has been more than many moons since the last post on this piss poor blog but, what is happening in what is left of Blighty has forced me to enter into the Web thingy again. 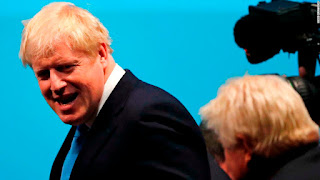 And yet again we have a Tory with no majority, no statesmanship and less than no chance of taking on the super state of the EU in a vain attempt to lead us from Germany’s domain.

So, we have yet another unelected Prime Monster, as Terry leather-legs May-be sidles orf back to the forest in Harry Potter, Bo-Jo slithers under the front door of 10 Downing Street.

What we will have is a repeat of the last three years, where moronic self serving MPs will bend Boris over the Commons mace and butt fuck him until he agrees to a second referendum.

Because no matter who is in charge and what is infesting the House of Commons “they” do not want to obey the people who put them in power and pay their not inconsiderable salaries and expenses.

Is it me or are minorities taking over the asylum? 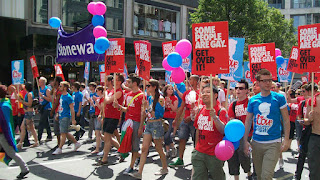 There appears to be a revolution, the LGBT portion of what used to be our free country have suddenly become the ruling class, there are massive gatherings, “Gay Pride” thingies and even the BEEB and the Co-op has joined the throng.

Don’t get me wrong I have no problem with chaps who want to shove their “man sausage” up another man's rear exit or Lady lovers who want to pummel another Lady lovers’ pussy, if that is their want then go at it, but PLEASE, PLEASE do not inflict your lifestyle on me.

I used to watch Holby City on Auntie but have stopped because the plot line has changed from the patients and the NHS to gay nurses, gay doctors and gay consultant/consultant, gay nurse/doctor, gay doctor/doctor and gay patient/doctor themes.

Good for them they should rename it Gaybe, I only pay the license fee which it seems I will be doing till I pop orf this mortal coil now.

And the co-op has released adverts extolling the virtue of celebrating LGBT people who “need to be loved” with a strawberry.

How about a heterosexual pride gathering in the smoke letting all and sundry know that we black, white, brown yellow and any other colour who like the opposite sex still exist and are the majority in Bighty and across the globe.

Or am I just getting old?

Above our green and bloody hot land 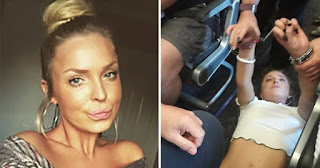 A passenger who allegedly caused two RAF jets to be scrambled to escort a plane back to Stansted Airport has been sent an £85,000 bill by the airline.

Chloe Haines, 25, is accused by Jet2 of a ‘catalogue of aggressive, abusive and dangerous behaviour’ on a flight bound for Dalaman in Turkey, including trying to open the aircraft doors during the flight.

The flight had to be escorted back to Stansted Airport by two Typhoon fighter jets while she was restrained by cabin crew and customers. A former bouncer who tackled her to the ground said she kicked, punched and screamed at the stewards.

A woman died after being crushed under her partner when they fell nine storeys while having sex over a balcony. It is believed he survived after she cushioned his fall at the tower block in St Petersburg, Russia.

According to witnesses the man staggered back into the building and went upstairs to join his friends. When they turned up, police initially thought they were dealing with a murder and sex attack after finding the woman with no clothing on the lower half of her body at the base of the building.

They also found a TV at the scene and believed it may have been the murder weapon.

However, witnesses told them about the couple having sex in the flat before falling.


The man, who only sustained minor injuries, has been tracked down and is currently under investigation, according to reports.

Surprised he didn’t take the TV back up.

That’s it I’m orf to check under the cars bonnet. Just in case...

"Insanity: doing the same thing over and over again and expecting different results."