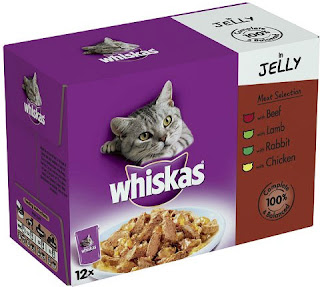 Not a lot of lack of cold, even less atmospheric movement, just as much solar stuff and oodles of condensed skywater at the Castle this morn, the saga of the study is continuing at the speed of time, another couple of trips to the "recycling centre” on the cards for today and I have just returned from the stale bread, gruel and his Maj’s food run dahn Tesco-bit of a surprise Whiskas meat in jelly (his fave) has gorn dahn to three squids from £3.68 so I stocked up, and his Dreamies have gorn dahn from one squid and thirty nine pees to £1.00.


According to the Independent 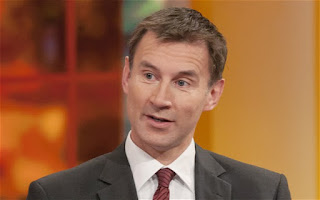 Online benefit claimants will from next year be asked to verify their identities by giving a password to one of a list of private organisations that includes a credit check company, international telecoms giant and a global defence company.
The Government yesterday announced its first seven partners in its controversial national Identity Assurance scheme which will allow online access next year to the new Universal Credit programme.
The initial partner organisations selected by the Department for Witless Pillocks includes: Post Office; Experian, the credit reference company; Cassidian, the defence and security division of the pan-European aerospace giant EADS; and the American global telecommunications giant Verizon.
The Identity Assurance scheme, revealed in The Independent last month, is intended to revolutionise the use of public services without creating a Government-run national online identity system. Ministers hope the programme will become a model for Identity Assurance for online access to all public services. Online users are given a choice of which partner to identify themselves with but the information on which government service is then accessed by the user is not shared with the third party organisation.
The other digital identity partners selected by the DWP for the first stage of the project were Digidentity, a Dutch-based digital company, Ingeus, an Australian welfare to work company, and Mydex, a British personal data company. Between them the companies, plus an unnamed eighth partner organisation will be paid £25m for their involvement in the project.
Other identity partners, including the High Street banks, may be introduced to the system as it is rolled out across Whitehall. Ministers hop the new identity model will “prevent ‘login fatigue’ [from] having too many usernames and passwords” and save public money by increasing trust in online services. The system is likely to be adopted by local authorities nationwide.


Couple of point:-what about those who do not have access to the Interweb thingy, and what the fuck has it got to do with the Post Office; Experian, Cassidian and any other “private” company?

And staying with the Piss Poor Policies Millionaires Club Coalition

Elf Secretary Jeremy CHunt has come up with a cunning plan for hospitals to be paid according to how many patients recommend its services to others, under a new NHS 'mandate' which sets out ministers priorities for the health service.

From April next year all patients staying overnight in hospital plus those attending A&E departments will be asked if they would be happy for their friends and family to be treated at the same hospital.

In October this will be extended to all women using maternity services and 'as rapidly as possible thereafter for all those using NHS services', the document said.

For the first time results in this area will be attached to finance. The report added: "Hospitals with good scores on the 'friends and family' test will be financially rewarded.


The details of how the payments will work have not been decided yet.


Another half-arsed half thought out balls up on the cards then, the only good news is that if it comes in Grimly Dark ‘orspital will be well and truly fucked..... 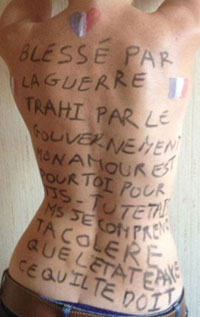 Hundreds of French women have bared their backs in a Facebook campaign for the payment of their soldier-husbands’ salaries. The French Ministry of Defence's faulty payments system has left them in the lurch.
Their Facebook group is called “Un paquet de Gauloises en colère”. And for this group of angry French soldiers’ wives, posing semi-naked has become the only way to protest against a computer glitch that has left their husbands unpaid. The Facebook campaign, which features wives, girlfriends, daughters and supporters of serving soldiers, baring their backs, has more than 17,000 members.


Over to the home of fruit and the land of fall


When Christopher Lilje showed up at Firelands Regional Medical Centre at about 3 a.m. Tuesday, he had a knife sticking out of his chest, a Sandusky police report said.
Lilje, 18, told police he was using the knife to peel an orange when he tripped over his dog in the kitchen of his family's Hayes Avenue home. When he hit the ground, the knife plunged about 3 inches into his right pectoral muscle, the report said.
Lilje's mother told police her son's screams woke her up. She rushed downstairs and found him lying on the floor, the knife protruding from his chest.
Lilje told the Register late Tuesday he's doing much better, other than an aching chest.
"My dog follows me around wherever go. I tripped," Lilje said. "I'm doing a lot better now, just a little sore."


Numpty-who uses a knife to peel an orange?

Still in the states 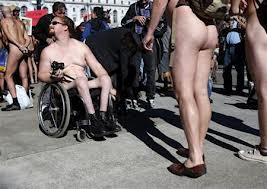 Two dozen pro-nudity activists assembled on the steps of San Francisco City Hall on Wednesday to protest a proposed municipal ban on public nakedness.
"We are here today in response to an attack on our fundamental freedom, our freedom to be ourselves in our own city," disrobed rally organizer Gypsy Taub declared as her fellow activists displayed signs saying, "Nudity is Natural" and "Nude is not Lewd."
The nude protesters, including one using a cane and another in a wheelchair, walked with DiEdoardo two blocks to the federal courthouse, where an officer refused to allow them to enter disrobed. DiEdoardo, who was fully clothed, went inside to file the court papers.


The best advert so far this year


Swedish insurance company Folksam asked their customers how they should best advertise their services.
Customer Eva, a cat lover, asked to see skydiving cats spelling out her name in the sky while R. Kelly's "I Believe I Can Fly" played in the background.


Go on watch the video- you know you want to...


That’s it: I’m orf to have a dig in the garden-well you never know... 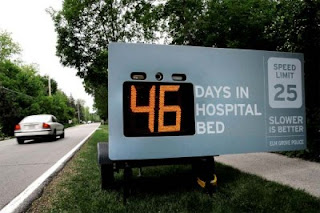 And I only came in to pay the car park charge