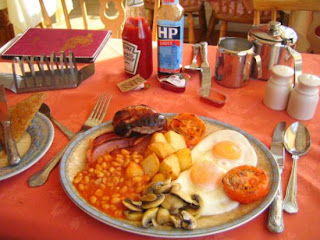 The sizzling bacon and fried eggs of the classic English cooked breakfast won a competition Wednesday to find a new flavour of crisps Yahoo! News UK

How dare they: Emma Rushin, a 27-year-old trainee midwife, dreamed up the concoction, calling it "Builder's Breakfast" after the cholesterol-heavy meal which is still the favourite start of the day for manual workers across Britain.

She won the 50,000-pound (56,700-euros, 75,400-dollars) first prize in a competition run by crisp manufacturer Walkers and will see her flavour go into mass production.

Her blend of bacon, buttered toast, eggs and tomato sauce received more than 232,000 votes of more than one million cast by the public, putting it ahead of flavours like Onion Bhaji, Cajun Squirrel and even Chilli and Chocolate.

The shortlist of new flavours were produced in limited numbers to allow people to sample them and cast their vote.

Sorry, but it will never take the place of the “full English”.

Six Chinese face huge Swiss fines for traffic offences these pilchards must have thought they were Jensen Button, Six Chinese who sped through a Swiss highway at up to 229 kilometres (140 miles) per hour have each been fined up to 95,000 francs (62,000 euros, 84,000 dollars) for speeding and other traffic offences, Swiss news agency ATS reported Wednesday.

According to a verdict published by the district court of Horgen, the judge threw out the defence that the Chinese drivers were unaware of Switzerland's highway speed limit of 120 kilometres (75 miles) per hour.

It ruled that they had "intentionally exceeded the speed limit."

The court set fines ranging from 5,400 francs to 95,000 francs for each of the drivers, with the highest fines also taking into account other traffic offences committed by the drivers in Switzerland.

The group was stopped by police on May 5 in 2008 while travelling in luxury vehicles, including Lamborghinis, from Italy to France where they were due to catch a flight home.

The content that the Australian Communications and Media Authority (ACMA) originally deemed to be inappropriate was to be found on a US site – Abortion TV. The site is political in nature, clearly coming down on the anti-abortion side of that debate – and the page in question features pictures of aborted foetuses.

Back in January of this year, ACMA wrote back to a complainant: "ACMA is satisfied that the internet content is hosted outside Australia, and that the content is prohibited or potential prohibited content.

"The Internet Industry Association (IIA) has a code of practice for Internet Service Providers (ISPs) which, among other things, set out arrangements for dealing with such content. In accordance with the code, ACMA has notified the above content to the makers of IIA approved filters, for their attention and appropriate action.

The code requires ISPs to make available to customers an IIA approved filter."

Lets hope the UK Government doesn’t get hold of this info, mind you they probably won’t understand it.

Jacqui Smith and her porkies Jacqui's secret plan to 'Master the Internet' • The Register Spy chiefs are already spending hundreds of millions of pounds on a mass internet surveillance system, despite Jacqui Smith's announcement earlier this week that proposals for a central warehouse of communications data had been dumped on privacy grounds.

The system - uncovered today by The Register and The Sunday Times - is being installed under a GCHQ project called Mastering the Internet (MTI). It will include thousands of deep packet inspection probes inside communications providers' networks, as well as massive computing power at the intelligence agency's Cheltenham base, "the concrete doughnut".

Sources with knowledge of the project said contracts have already been awarded to private sector partners.

The American techology giant Lockheed Martin is understood to have bagged a £200m deal. The BAE-owned British firm Detica, which has close links to MI5 and MI6, as well as to GCHQ, has also been signed up to help on MTI.

A spokeswoman for GCHQ said the agency does not comment on individual contracts. "GCHQ works with a broad range of industry partners to deliver a complex portfolio of technical projects," she said. Detica also declined to comment, and Lockheed Martin did not return calls.

Yeah right, and my cat is going to be the next Prime Minister: mind you………

Man sues over right to wear skirt in public A man is suing the New Orleans Police Department, claiming he was harassed by an officer who threatened to arrest him for wearing a black pinstriped skirt to municipal court.

Jeremy Don Kerr is asking for $1 in damages, a ruling that his rights were violated, and an order against barring access to public facilities because of gender stereotyping.

Kerr filed the civil-rights lawsuit last month. He said he finds skirts more comfortable than pants, and wears them with button-down Oxfords or T-shirts.

Whatever floats your boat I suppose, but wouldn’t it be a bit nippy round the vegetables?


"Discretion is being able to raise your eyebrow instead of your voice." Anon