Bribble factor 3 last eve, very quiet and I managed to repel the hordes of pathetically painted persons begging for a sugar high.

Raising the drawbridge helped but the little buggers managed to float across the moat on pumpkins, the boiling oil came in very handy, fried child anybody? 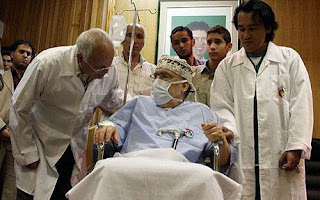 Abdelbaset Ali Mohmed who was convicted of the Lockerbie massacre and released on “compassionate grounds” because he had ‘less than three months’ to live is alive and walking around three months on.

The source told The Sunday Telegraph: "His condition has not deteriorated in three months. He is pretty much in the same way as he was when this all started. He is just as he was. There is nothing that leads anyone to believe he is in any different condition to when he left Scotland." And is still able to talk and walk with a stick, contradicting claims from his family that he is bedridden, unable to speak and near to death.


We really are becoming the soft touch of the world. 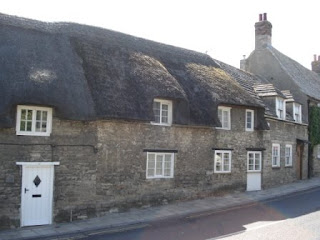 Tens of thousands of listed buildings and large swathes of the countryside could be destroyed after two key planks of the 60-year-old planning system were quietly dismantled by ministers.

In previously unreported plans, the Government is to downgrade protection on old buildings and those in conservation areas in order to “benefit developers” and “reduce the number of applications for planning permission rejected on heritage grounds.”

In a separate development, planning powers on all “major infrastructure projects” – such as new wind farms, pylon lines, power stations and trunk roads – will be taken away from elected politicians and given to a powerful new “superquango” which will decide even the most controversial scheme in only a matter of months.

Nice to see we are looking after our heritage.


You can run but you can’t hide 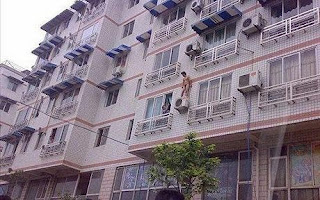 A naked man who climbed out of a window and hid on the ledge to escape his lover's furious husband has been caught on camera.

Sun Meng has been given the cold shoulder by his community after the extraordinary picture of him cowering naked outside the flat were posted on the internet.

The terrified 25-year-old fled from the balcony window when he was caught in bed with the man's wife at the married couple's flat in Chengdu, central China.

Photographs of the angry showdown, taken by a startled neighbour, were uploaded to a local community website.

They show Sun perched on the first floor ledge while his lover is confronted by her un-named husband inside.

"My family is ashamed and none of my own neighbours will talk to me any more," said Sun.

"I know what I did was wrong but I was afraid he would kill me.

"People are even laughing at how I look naked - but I have to point out it was a very cold day," he added.

Chengdu, capital of the Sichuan province in south-western China, has a population of about 11 million.

In 2003, the Chinese government relaxed its traditional hold over the private lives of its subjects by allowing them to marry without the permission of their bosses.

Such a little thing to make such a big fuss over. 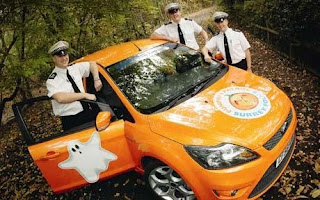 A police force has changed a patrol car from its usual blue and white to 'pumpkin orange' as part of an effort to combat anti-social behaviour on Halloween and Bonfire Night.

The Surrey Police vehicle is also decorated with ghosts as part of the theme.

It will operate across the county for the next fortnight.

Superintendent Colin Green, who is co-coordinating the operation, on behalf of police, fire and trading standards, said: "We didn't want to spoil anyone's fun, but Halloween and Bonfire Night don't legitimise bad behaviour or vandalism. We still want people to have a good time but to also to consider how their actions can affect others.

"Traditionally reports of anti-social behaviour, such as criminal damage or public nuisance, see a rise at this time of year but we are warning that the celebrations are no excuse for troublemakers and criminal offences will not be tolerated.

"Officers will be carrying out high visibility patrols around the county over the next two weeks and taking appropriate action against any bad behaviour.

"Causing damage to someone's property could result in an on-the-spot fine or an arrest.

"Surrey Trading Standards Officers have been working with local businesses asking shops not to sell large quantities of flour and eggs to those they suspect will use them to damage property.

"Shops selling fireworks have also been reminded they face criminal action and a fine of up to £5000 if they sell to anyone under the age of 18."


The crims should be able to see that coming from miles away. 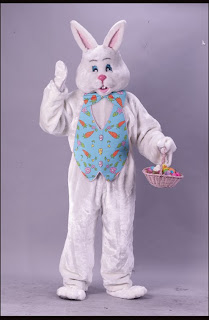 From Portland Oregon: The Mercedes driver testified he didn't see the 6-foot-tall orange rabbit driving a pedicab because he was fumbling for a dropped cell phone.

Pedicab driver Kate Altermatt tells The Oregonian she finds that hard to believe, noting she was wearing a bright orange bunny suit - for Easter - and her Cascadia Pedicab was lit up with reflectors and a blinking red light


. She says the crash sent her flying and totalled the pedicab.

She confronted the driver Wednesday in Multnomah County Circuit Court.

After a daylong trial, Judge Karin Immergut found Edward Cespedes-Rodriguez guilty of hit and run driving for leaving the scene of the crash last April 12.

But Immergut cleared the 34-year-old Portland man of recklessly endangering another person.

Should have gone to Specsavers. 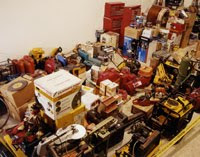 This little tale comes from Montana: Two Bozeman men have been arrested on probation violations after police said they tried to pawn a truckload of stolen items to bail a friend out of jail. Helena Police Chief Troy McGee said the two 21-year-old men arrived at a pawn shop Saturday morning with about $20,000 worth of goods including bikes, televisions and tools.

The store's clerk was suspicious and called police. Officers questioned the men, who said they were trying to raise bail money for a friend. A check with Bozeman police produced no reports of burglaries matching the items.

The officers got the cell phone number from one of the men.

Officers called the men and told them to turn themselves in. The men did and were arrested. 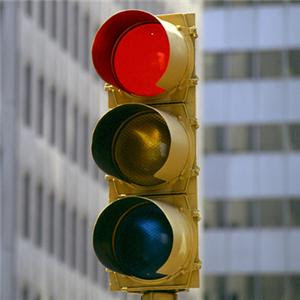 Bulgarian prosecutors are investigating a new gambling game in which drivers defy death by speeding through red lights for bets of up to 5,000 Euros ($7,400), the chief prosecutor's office said Thursday.

Known as 'Russian road roulette', the driver must jump red lights at busy intersections at high speed and not crash into any other cars or pedestrians, according to local media reports. Onlookers also gamble on the result.

Prosecutors launched their investigation after media reported the new game had been held at night at busy crossroads in Sofia since the summer.

In June, two people died after a motorcyclist crashed into an onlooker at a similar rally on Sofia's ring road.

"Every time we receive a signal for such an unregulated race, we send patrols," Commissioner Vanio Stoevski, head of the Sofia Road Police, told Reuters. Since the deaths in June, police have monitored roads where such races are typically held.

Local media report that participants in the 'Russian road roulette' are informed via text messages of the venue for that particular night -- depending on the presence of police.


I’m off to scrape the burned offerings out of the moat.