Not a lot of vertical amounts of liquid metal in the gauge, more than a puddle of skywater, just as much atmospheric movement and sod all solar stuff at the Castle this morn.


Orf to do the stale bread, gruel and his Maj’s food run dahn Tesco later, and then back into the study for the final fling.

Sadly there is bad news from Dahn Unda 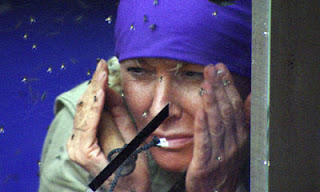 Nadger Nadine Dorries has managed to escape the spider infested jungle with help from the public, after only 12 days the MP without lash was voted out.
Dorries reckoned that "I actually came here self-important... but I'm not now," the Mid-Bedfordshire MP said after the show's public vote.
Before it began, Dorries said she wanted to use her appearance to raise awareness of issues she is interested in, such as reducing the time limit on abortions from 24 weeks to 20 weeks.
When asked by presenters Ant and Dec if she felt she had achieved her aim, she said: "I don't know what people have seen but I have had some fascinating conversations in there. It's been a fascinating experience.
"I think it is important that MPs realise that you need to go where the public go. More people vote on X Factor and I'm A Celebrity than they do in the general elections. MPs need to go where people vote."


And the last time I was in the Jungle-now let me see.......at least it will save money on the phone bill. 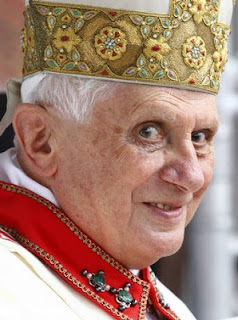 The entire Christian calendar is based on a miscalculation; he claims in a new book that Jesus was born several years earlier than commonly believed.
In his “new” book-'Jesus of Nazareth: The Infancy Narratives', the 85 year old Ex Nazi reckons that the 'mistake' was made by a sixth century monk known as Dionysius Exiguus or in English Dennis the Small.
Dennis the Small, who was born in Eastern Europe, is credited with being the "inventor" of the modern calendar and the concept of the Anno Domini era.

He drew up the new system in part to distance it from the calendar in use at the time, which was based on the years since the reign of the Roman emperor Diocletian.


The Ex Nazi old fart also reckons contrary to the traditional Nativity scene, there were no oxen, donkeys or other animals at JC's birth.


So does that mean that it is 2015 then? In that case I claim my bus pass and winter fuel allowance.....

A school has hired proofreaders to check the spelling and grammar...of the teachers.
The 1,720-pupil high school has hired “copy editors” to correct mistakes in pupils’ school reports.
A job advert wanted people to “check and amend the electronic reports to ensure that they are well written before being released to parents”.
The school hopes to stop “spelling mistakes, poor or missing punctuation, incorrect capitalization [sic] and word spacing”.
They will be paid £14.02 an hour to work up to 20 days a year. Proofreaders will also advise staff how to improve their use of English
David Hutton, head of Northgate High School in Ipswich, said the school’s excellent exam results proved they had great staff.
He said: “Between them they produce literally thousands of well-written comments each year that keep parents informed about the progress of their children.”
“Making a final quality check prior to publication indicates the high level of professionalism we strive to achieve.”


Never heard of spell-check then?


And how to “advise” your older kiddlies on driving habits. 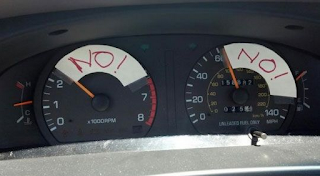 An online video featuring cartoon creatures killing themselves in a variety of ways as part of an Australian transport safety campaign has gone viral, with almost 12 million YouTube views in a week.
The Melbourne Metro Trains video "Dumb Ways to Die" features colourful, round cartoon characters dying in improbable circumstances ranging from poking a stick at a grizzly bear to using "private parts as piranha bait", and selling both kidneys on the Internet.
The final chorus depicts what is said to be the "dumbest ways to die" -- standing on the edge of a rail platform, driving through level crossing gates and running across train tracks.


Candidate for the “Darwin” awards?

The longest word......in the world.....
The full chemical name of the world’s largest known protein has 189,819 letters and is considered the longest word in any language. If you’re one of those people who love to watch paint dry, you can even watch a 3.5-hour video of a guy pronouncing the whole name.
Titin, also known as connectin, is a giant protein composed of 244 individually folded protein domains connected by unstructured peptide sequences. Also, the gene for titin contains the largest number of exons (363) discovered in any single gene. Titin is important in the contraction of striated muscle tissues, but it’s mostly known for its technical name, which is sometimes referred to as the longest known word in any language. The name “titin” is derived from the Greek “titan” (a giant deity, anything of great size), but it’s the full chemical name that really does it justice.

If you have the odd three and a half hours feel free to watch the video, but I can tell you that it begins with “me”.
Or you could download it from here, good luck.


That’s it: I’m orf to check for Titpox.


And today’s thought:
Gone to the dark side 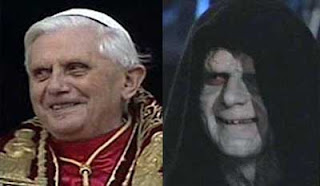