Taxing cock-ups: Fit for cancer: Only wipe once: Mooving mowers: Type a picture: and Light trucks.

Colder than the coldest thing at the Castle this morn, since “retiring” the phone hasn’t stopped ringing with users wanting a fix-sod it, and I decided to have a clear out yestermorn, loaded the Honda up with stuff for the “recycling centre” shut the tailgate and........smashed the rear window.
My poor old ventilated motor is now dahn the “windscreen” place awaiting delivery of a new rear exit window-that’ll teach me.

Allegedly HMRC is being a naughty dept 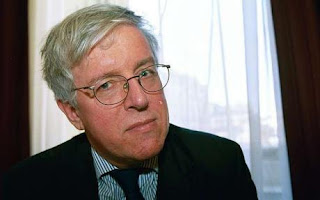 A highly controversial tax deal which cost the public purse billions may have been illegal, according to allegations being examined by a powerful parliamentary committee.
The public accounts committee is considering claims from a whistleblower who says that an agreement to waive a potential tax bill of up to £7bn from Vodafone may have been outside the powers of HM Revenue and Customs (HMRC).
Separately, the whistleblower has also claimed that an agreement that HMRC officials claimed let the US-based bank Goldman Sachs off less than £10m was actually worth about £20m to taxpayers.
The committee wants to commission a QC to examine the allegations in depth.
The move could cause further problems for Dave Hartnett, the head of HMRC, who has admitted making mistakes while settling high-yield tax disputes with multinational companies.
A spokesman for HMRC said: "We are entirely confident that our approach to large business tax settlements is the right one. This approach has brought in more than £13bn from large businesses since 2006.

Make your bloody minds up..... 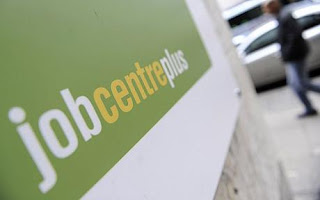 Has decided that cancer patients undergoing chemotherapy will be forced to prove they are not fit to work or face their benefits being cut, under Government proposals.
Sufferers will have to undergo medical tests and interviews or lose their entitlements, which are worth up to £100 a week.

The proposals, which include testing for those receiving radiotherapy treatment are included in a report to ministers.

The report’s author, Prof Malcolm Harrington, is the government’s official adviser on reforming welfare payments for the sick.

Over in one of the lands that used to have money 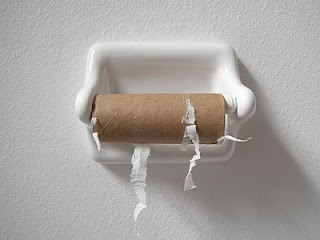 Schoolchildren in Catalonia are the latest victims of austerity cuts with authorities instructing them to limit their use of lavatory paper in a bid to save money.
The north-eastern region has been ordered to rein in its deficit and has embarked on a series of stringent austerity cuts.
The latest edict issued by the region’s ministry of education instructs state schools to cut “excessive consumption” of toilet roll among pupils and limit the quota to a maximum of 25 metres per child per month.

Good job that shirts have tails... 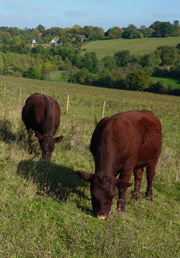 Sutton Council is drafting in a crack team of Sussex cattle to look after the rare chalk grasslands of Roundshaw Downs.
The cattle, one of the UK's oldest breeds, will be tasked with keeping weeds and shrubs away from the borough's largest nature reserve. It was feared the weeds could potentially overrun the downs, which is vital to harbouring wild flowers, insects and ground-nesting birds like skylarks.
Councillor Colin Hall, environment spokesman, said: “This is an innovative way of helping to preserve Sutton’s rare chalk grasslands. The Downs can support up to 50 different species of plants within one square metre, and bringing in grazing cattle will help the plants and animals that live there to flourish.
“It’s also a great way of bringing a little bit of the countryside into the city, and will give local children the chance to see farmyard animals right on their doorsteps.”

Spiffing-and the bonus is that free school milk will be available......

Somewhere over the rainbow 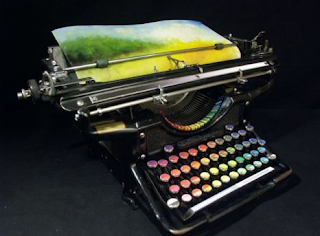 Tyree Callahan has invented a machine that can create pictures by swapping the ink on the typewriter keys for oil paint.

The artist got the idea for his ‘chromatic typewriter’ after experimenting with another machine as he struggled with a watercolour in his studio.

‘I have an old Olivetti typewriter lying around and I thought to add some text to the watercolour,’ he said.

‘I rolled the watercolour into the carriage and started typing and that’s when the inspiration struck. I knew that an older typewriter would be ideal for the project.’


Tyree chose a 1937 Underwood Standard typewriter to create his prototype.

But he had to first spend more than three weeks cleaning the model, which he bought at an antique shop.

Isn’t that why they invented printers...


East to the land of expensive car crashes 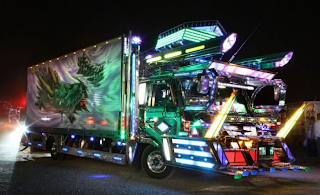 Trucks known as Dekotora or Decotora, an abbreviation for 'decoration truck' have appeared to raise money for a Japanese children’s charity.
Families in Japan can spend months fitting each vehicle with about £100,000 of eye-catching bling.
They feature so many light bulbs that extra generators have to be fitted under the lorry’s chassis to power them.
The generators can only be switched on for about 20 minutes before they overheat.

Some Lorries feature ‘tusks’ made of protruding lights. Others are decked out in themes, including one green ‘monster truck’.
Inside, the effect is just as grandiose with one cavernous interior featuring a carpeted dashboard – covered in wallpaper – and complete with an enormous glass chandelier.
Hundreds of the gaudy Lorries flock to meetings where owners show off and swap tips.

Shame they weren’t about when those Numptys in the Ferraris managed to “lose control”.

That’s it: I’m orf to look for Squamanita paradoxa 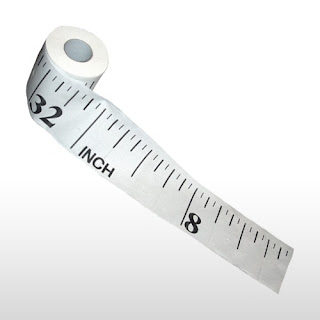