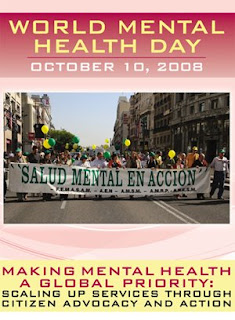 I am a bit late posting this. I didn’t know when it was until the 13th.

I did send it to NHS Exposed a while back, but I think I may have upset the editor because it wasn’t posted.

I am good at pissing people off. It’s a gift.

However here it is.

A definition of mental illness.

“Mental disorder or mental illness is a psychological or behavioral pattern that occurs in an individual and is thought to cause distress or disability that is not expected as part of normal development or culture. The recognition and understanding of mental disorders have changed over time and across cultures. Definitions, assessments, and classifications of mental disorders can vary, but guideline criteria listed in the ICD, DSM and other manuals are widely accepted by mental health professionals. Categories of diagnoses in these schemes may include dissociative disorders, mood disorders, anxiety disorders, psychotic disorders, eating disorders, developmental disorders, personality disorders, and many other categories. In many cases there is no single accepted or consistent cause of mental disorders, although they are often explained in terms of a diathesis-stress model and biopsychosocial model. Mental disorders have been found to be common, with over a third of people in most countries reporting sufficient criteria at some point in their life. Mental health services may be based in hospitals. Mental health professionals diagnose individuals using different methodologies, often relying on case history and interview. Psychotherapy and psychiatric medication are two major treatment options, as well as supportive interventions. Treatment may be involuntary where legislation allows. Several movements campaign for changes to mental health services and attitudes, including the Consumer/Survivor Movement. There are widespread problems with stigma and discrimination.”

There is no way I am going to delve into all the different “kinds” of “mental ilnessess”, a) because I am not qualified, and b) because I am lazy.


But I note that part of the definition is “a psychological or behavioral pattern that occurs in an individual and is thought to cause distress or disability that is not expected as part of normal development or culture.”

If we take this definition as absolute, then aren’t we all “mentally ill”.

I think we can take it that Murder, rape, paedophillia, stabbing people , shooting people, mugging people, burglary,elderly abuse, child abuse, and other such crimes are way beyond the “norm” and people that commit these actions are “Not Normal”, and should be removed from society for as long as possible.

But what about the rest of us?

Isn’t drinking too much, or smoking, or overeating, or verbal abuse, or anti-social behaviour, road rage-pavment rage-pram rage, “not expected as part of normal development or culture.”?
Is smoking, drinking and overeating “destructive behaviour”? Or is it our method of dealing with stress, or life in general?

We have all probably been guilty of road rage, I know I have, but I suppose the difference is that most of us do not actually follow it through to attacking someone, we rely on the one finger salute and plenty of adjectives method to “vent our spleen”.

I personally have never had “pavement rage” or “pram rage” but they are reported.
Don’t we all have some sort of personality disorder, however mild.

Is this “normal” behaviour -http://news.bbc.co.uk/1/hi/england/london/7655122.stm
Are the staff that did this to the old people “mentally ill”? Or is it that they just don’t care? And is lack of caring a sign of mental illness?

Or what about this-http://news.bbc.co.uk/1/hi/health/7607112.stm about “Kate” and her treatment by police when she was held under the Mental Health Act.

Or this-http://news.bbc.co.uk/1/hi/uk/7607599.stm about Thousands of people with mental health problems are being detained in police cells rather than being taken to hospital for assessment.

Or this-http://www.bbc.co.uk/insideout/london/series10/week5/week5_mental_health_illness.shtml from, Marjorie Wallace Founder of Sane

Or this-http://www.bbc.co.uk/blogs/newsnight/2008/01/bravery_in_the_face_of_mental_illness_1.html the interview of Mr Bondevik on newsnight.

There are hundreds, perhaps thousands of stories like this, which we push to the back of our minds or ignore completely because it makes us uncomfortable.

So why is there such a stigma attached to mental illness? Why do we avoid those people who through no fault of their own, suffer from probably the worst “affliction” that can infect the human psyche?

Why do we assume that all schizophrenics are dangerous? Or all depressives are suicidal?

I was married to someone who had Manic Depression for over 30 years (I dislike the term “BI-Polar” intensely) she was the most intelligent, caring, thoughtful, creative and modest person it has been my priviledge and honour to know.

But “people” who didn’t know her would “stand off”, in case they became “infected” or were “attacked.”

It is the assumption that “mentally ill” people are not like “us” and should be ignored because it isn’t something “we” are willing to discuss or accept, rather like Cancer a few years ago, or Death, which is still a “taboo” subject.

People make assumtions that the mentally ill are not capable of rational thought, or contributing to society, take a look at this list of people who have or have had Manic-depression.

These people have contributed far more than us “normal” people to society, they are much braver than us because despite their “affliction” they have carried on with their lives, just as most Manic-Depressives do.

The Manic phase of the “disease” can be wonderful for the sufferer, the creative juices flow and great works of art or literature can be produced. The downside of course is the inevitable “depression” phase.

But with medication, this can be controlled, the problem is that when a Manic-Depressive is “stablised” there is the sense of loss of the “up” side.

I also know some schizophrenics, I met them through a Day centre my wife attended, while I was working. The first impression I got was the fear, they seemed afraid of me. It took quite a while to get them to trust me.Once they did we got on famously, I would go on days out with the group, and help out. Their sense of humour is wicked and you could catch glimpses of their personality through the heavy medication.

But the overall impression was of dispair, I talk about the “dark mist” but what these guys were going through I could not imagine.

And of course there were the tragedies, one guy, Anil, who was shy and modest just couldn’t cope anymore and threw himself off the top of the muilti-storey car park.

Yes there is still a stigma and discrimination and fear regarding mental illness, but isn’t it about time that “we” looked it straight in the face and accepted it?

So next time you find out, or somebody tells you they have a “mental illness”, think for a moment, because it could quite easily be you, they deserve our respect and support. Not our distain or fear.

Because I don’t know about you but I wouldn’t have the courage to try to carry on if I was in that position.

Just remember 1 in 4 of “us” will suffer from some form of mental illness in our lives. Yes that’s 1in 4. And that includes doctors, politicains, nurses in fact every one.

By the way I am “mentally ill” I have severe depression, but you have read this haven’t you.
http://nhsexposedblog.blogspot.com/2008/09/this-guy-sings-blues.html