Dull, damp and dismal at the Castle this morn, the big shiny yellow thing came out at about six last pm, I let his Maj out the first thing he did was to climb to the top of the flowering cherry tree, ten minutes later I rescued him using the ladder, and after a bit of a rest he did it again... 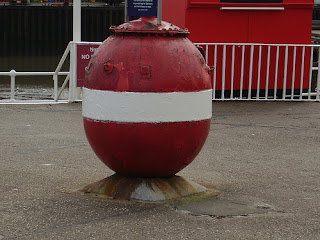 I see that Royal Naval divers will make a second attempt later to blow up a live World War II mine which was dredged up off the Essex coast.
The 2,000lb (900kg) German parachute mine was found on Friday eight miles off Clacton.
It was due to be detonated on Saturday but became detached from its markers in 90ft (27m) of water.
Severe weather and poor visibility hampered divers trying to move it. They are expected to try again at 0700 BST.

Its Essex- let it float into shore.....
And according to the Independent 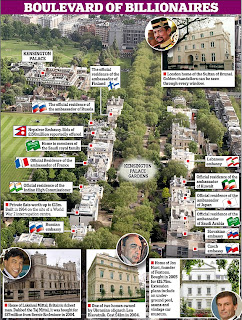 More than half of the UK's millionaires have fled or are thinking of fleeing the country's economic "storm clouds", according to a new study.
Taxation, perceived better living standards abroad and the weather mean that only 44 per cent say they are certain to remain here. But the survey of more than 500 UK-based millionaires, carried out for investment firm Skandia, found that only 2 per cent were thinking of moving to a tax haven. Preferred destinations included the US and Spain.
Jo Rimmer of Skandia said: "It seems to indicate that the UK's wealthiest will seriously consider moving to sunnier climes in either economic or meteorological terms."

Up in the posh bit of the almost midlands 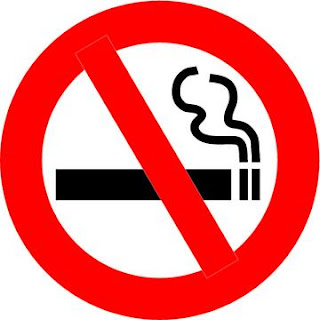 About 200 people have attended a protest against plans to ban smoking in open places in a Buckinghamshire town, according to organisers.
Councillor Paul Bartlett has proposed a new by-law to outlaw smoking in any public place in Stony Stratford.
Among those who spoke against the ban was UKIP leader Nigel Farage, who said it could stop people coming to the town, affecting local businesses.
Town councillors will be voting on the proposal on Tuesday.
If the plan is approved, smokers who light up in public in Stony Stratford could face on-the-spot fines.
Mr Bartlett has said the town, near Milton Keynes, is "blighted by cigarette butts".
I’d join them but I can’t afford the go juice to get there, and as for Niggle Garage-I hope he isn't going by plane....
Left to a bit of the land of the poor and the home of the automobile 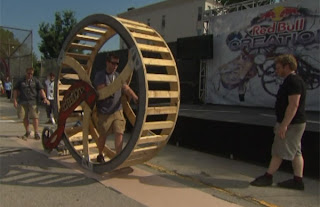 Tech nerds gathered in Brooklyn recently for a creation competition that yielded such inventions as a human hamster wheel and a wedgie-powered bicycle for Red Bull's third Creation Challenge.
They worked with welders and grinders for 72 hours straight to build contraptions out of stuff they found in a junk yard.
This year's mission was to build something, anything, which can transport a person.
Teams competed to build an invention that would be judged by others just like them.
Whoever wins will walk away with $10,000 and a pretty big title.
"It was really impressive to see what these crews came up with. They were some of the most creative people in the country, and we brought them all into one place, and the inventions that they came up with were all brilliant, but all incredibly, incredibly, diverse," he said.
The winner of the competition was team 1.21 Jigawatts, with a giant, human-sized hamster wheel that leaves behind messages on the ground as it moves.
"I mean the idea behind this event is to really inspire people, and especially young people, that instead of going out and buying things, that they want or need, that they can make these things," the Red Bull Creation Project Manager, Jeff Naumoff said.
After they go out and buy the things they need to make them I presume…..
Dahn a bit and left a smidge 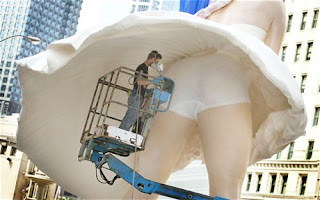 A Marilyn Monroe statue has been unveiled in Chicago and visitors will hardly be able to miss it - as its 26ft tall.
The huge sculpture in a square on Michigan Avenue features the late actress in her famous pose from The Seven Year Itch, standing above a subway grate with her skirt billowing up.
It proved an immediate hit with sightseers and local office workers, who gathered to have their photograph taken with Monroe.
Perhaps predictably, the most popular snap involved male fans gazing up the sex symbol's skirt at her lacy underwear.
It took a team of people to decorate the sculpture, with one worker given the job of going up in a cherry picker to spray-paint her knickers on.
If you want to see Marilyn’s knickers hurry up because it will only be there until spring 2012.
Dahn Unda
Dog bites shark.
And finally:
Back in the land of the damp and the home of huge fuel bills 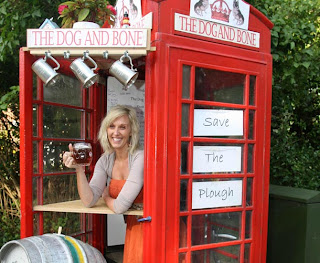 Villagers angered by the ­loss of their only pub have turned a disused phone box into a tiny new local – thought to be the smallest in the world.
They clubbed together to open The Dog and Bone after buying the red call box for £1 from BT, adding a wooden “bar” where pints can be pulled from a barrel.
And the 3ft by 3ft venue in Shepreth, Cambridgeshire – where regulars are ­backing the Sunday Mirror’s Save Our Pubs campaign – could end up in the record books.
The Dog and Bone is less than half the size of The Nutshell in Bury St Edmunds, Suffolk, which is in the Guinness World Records book as Britain’s smallest pub at 16.5ft by 6.5ft.
Alistair Janson, who ran The Plough pub in the village, which has now closed, said: ‘We believe this to be the smallest pub in the world and are looking to seek recognition from the Guinness adjudicators.
“Anyone who thinks that a pub isn’t viable in this village should think again.
“We just want to demonstrate how ­thoroughly we need a pub in the village by using one of the only facilities here. And while we may be small, we are proud to be getting behind your campaign.”
The Plough closed down after being turned into a restaurant and ­villagers are now campaigning to stop it being converted into ­housing. They want ­planners to rule that the ­building, popular with pilots based nearby during the Second World War, must only be used as a pub.
A shocking six pubs are shutting each day in the UK. The Sunday Mirror is calling on PM David Cameron to honour his election promise that his ­Government would be “pub-friendly” and take urgent action to protect them.
Don’t care-don’t drink and anyway even if I did I would have to stand in the garden to have a smoke....

That’s it: I’m orf to build a beehive fence to keep the Elephants out of the Castle grounds- am I allowed to Bee-Hive like that?
And today’s thought: "It's so bad being homeless in winter. They should go somewhere warm like the Caribbean where they can eat fresh fish all day." - Lady Victoria Hervey.
Angus
Posted by Angus Dei at 08:01 3 comments