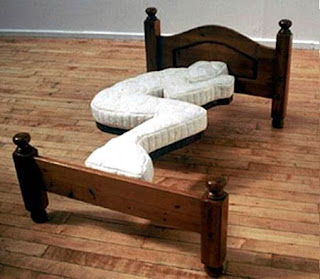 FAISMESDEVOIRS.COM is a new web site where children will be able to buy answers to simple maths problems for 5 euros (4.40 pounds), while a full end-of-year presentation complete with slides and speaking notes will cost 80 euros.

Agathe Field, a young English teacher at a secondary school in a suburb of Paris said: "It is shocking. It defeats the purpose of education which is that the pupils need to learn for themselves how to do the work,"

Does it add up?


No Spitting in the car.

A SAfrican couple drove 170 Km with a spitting cobra in their car, the driver Gordon Parratt, felt the snake wind itself around his leg while he was driving.

At first he thought an insect had brushed his leg and swiped it away, but when he looked down he saw the snake next to his left foot.

The couple finally managed to call a snake expert to remove the cobra,


Personally I would have been out of the car like a rat up a drainpipe.

Not really in the spirit.

Japanese Buddhist steals statues to pray A Japanese man whose home was found packed with Buddhist statues told police he had stolen some from temples in the ancient capital of Kyoto so he could pray to them, police found 21 statues of Buddha in the 59-year-old's house after he was arrested on suspicion of stealing a wooden Buddha figure from a temple in Kyoto.

Sort of defeats the object.


No farting in the pool.

"There's nitrate in water that has been polluted by humans, so the more we pollute, the higher the production of this problematic gas will be," Fanni Aspetsberger from the institute told AFP on Tuesday.

They must be the happiest creatures in the world.

Diners threaten to grill Cyprus taverna in bill dispute Disgruntled diners at a taverna in Cyprus opened fire with a shotgun and doused the room in petrol, threatening to torch it after a dispute with the owner over the bill. Skip related content

Three men had quarrelled over a 93 euro (82 pounds) charge for drinks and food at the restaurant in Mesana village, in the west of the Mediterranean island, Sunday night. They offered to pay 50 euros instead.

Two of them left, only to return with a can of petrol and a shotgun, police said.
Shots were fired at the restaurant owner but he was not hit. One man then emptied the petrol over the room and said the other patrons would be burnt alive. Police arrived in time to stop him.

Two men were being questioned Monday and a third who fled was being sought, police said.


I don’t think they have quite got the idea about eating out.

“You can observe a lot by watching.” Yogi Berra

NHS Behind the headlines
Angus Dei politico
Posted by Angus Dei at 09:10 0 comments