Late again, yes it is the internet connection, because it rained again! 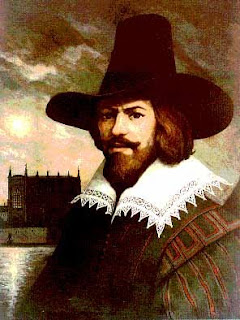 Important; yes but not earth shattering, I think we all know what goes on behind closed doors at number 10, the same things that go on with every Government in power, it doesn’t seem to matter whether it is “New” labour, the Tories or the other one, the main purpose of those in power, or out of power seems to be moral destruction of the other parties.

I find politics to be amusing; it is interesting to watch human nature at its worst and to watch the polies’ squirm, but I can’t find the energy to spend months chasing one “story” life is too short, still; each to his own. 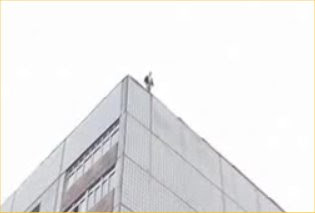 If at first you don’t succeed, jump off again.

A Russian man survived after downing three bottles of vodka and leaping from a fifth floor balcony - twice.

Alexei Roskov says he jumped the second time because he couldn't take his wife's nagging about the first time.

Wife Yekaterina had watched in horror as her drunken husband opened the kitchen window of their Moscow apartment, and hurled himself out.

Astonishingly Mr Roskov, 22, survived and managed to stagger back upstairs with barely a scratch after the 50ft fall.

But while his wife called for an ambulance and began to scold him, he jumped again.
Amazed medics treated Mr Roskov for minor cuts and bruises before releasing him.
Mr Roskov says he is now teetotal after giving up drinking, and added: "Now I can say just one thing - I was very lucky.

"I have no idea why I jumped the first time but when I came back up and I heard my wife screaming angrily at me I thought it was best if I left the room again - out of the window." 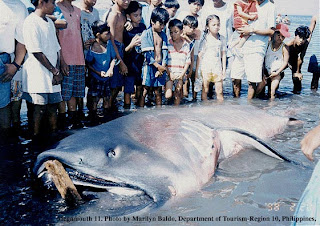 
Fishermen in the Philippines have accidentally caught and then eaten one of the rarest sharks in the world.

The megamouth shark is one of the most elusive species in the world - the one eaten by the fishermen was only the 41st ever spotted.

A WWF representative said the shark was butchered and its meat sautéed in coconut milk as a local delicacy, against the conservation group's advice.

Ironically, the coastal town of Donsol has earned a global reputation for marine conservation.

The town prides itself as being the whale shark capital of the world and marine tourism is vital to the town's economy.

Anyone got any chips? 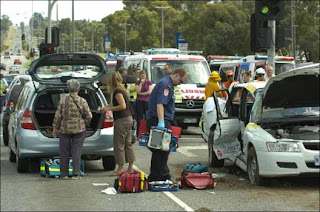 And back on the theme of “if you don’t” Reuters A German woman was involved in three car accidents in less than an hour that left a total of seven vehicles damaged but she suffered only slight injuries from the series of mishaps, police said Tuesday.

The 69-year-old woman from Berlin first crashed into three cars while trying to pull out of a supermarket car park on the Baltic resort island of Usedom.

Then, she accidentally stepped on the accelerator and sped across a lawn before crashing into a nearby house, police said. She was taken to hospital in an ambulance but that vehicle was then hit by a truck.

"She was actually fortunate that no one was seriously hurt in any of the accidents," said Zinnowitz police spokesman Axel Falkenberg. "The accidents were a little bit like dominoes toppling." 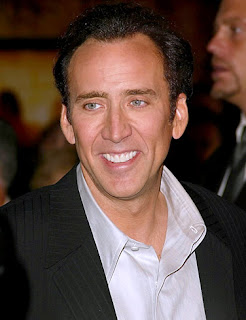 A bit of entertainment news ABC News (Australian Broadcasting Corporation) poor old Nicolas Cage has been forced to sell his 28-room Neidstein castle with 165 hectares of forest and gardens in Bavaria because of the credit crunch.

Shame: but he still has a choice of where to live- properties. 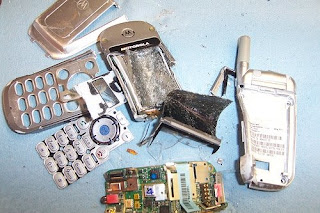 Teenagers are the same the world over-Excite News America; A cell phone used by a Wyoming 13-year-old to run up a nearly $5,000 phone bill will text no more thanks to her angry father and his hammer. Dena Christoffersen of Cheyenne sent or received about 20,000 text messages over about a month, and her parents' phone plan didn't cover texting.

Gregg Christoffersen told KUSA-TV of Denver this week that he thought texting had been disabled on her daughter's phone, which he smashed hours after getting a phone bill for more than $4,750.

The family said Verizon has been willing to knock the bill down to a reasonable level.
Dena has been grounded until the end of school. She said she feels bad and has learned her lesson.


Until she gets her hands on another phone. 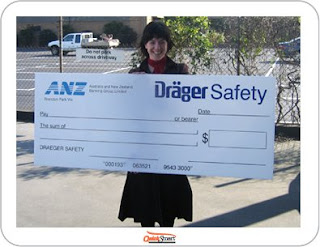 Would you? Excite News
LOS ANGELES (AP) - As she walked from a post office, Talon Curtis thought she'd found one of those gimmicky sweepstakes offers on the ground that scream something like "$357,959.55" in big bold letters and "This is not a real check" in much smaller type. But just as she was about to do her part for a cleaner planet and deliver the paper from the parking lot to a trash can, she noticed it was a real cashier's check with a real signature.

She immediately set out to find its rightful recipient, but it was Saturday afternoon and the banks were closing. On Monday, with help from KCAL-TV reporter Dave Malkoff, she located the check's owner, who had arrived at her bank in a panic.

"I think she had walked in at the same time the bank manager called me back," Curtis said. "I could hear her walking up to him. And I could hear all this commotion in the background."

Curtis said she never thought of keeping the check for herself, and she declined the woman's offer of a reward. Still, she's just a little disappointed.
"I just wanted to see her face," Curtis said, laughing. "I just wanted to let her know that there are honest people left in this world."


“A politician needs the ability to foretell what is going to happen tomorrow, next week, next month, and next year. And to have the ability afterwards to explain why it didn't happen.” Sir Winston Churchill