WHY MEN DON’T GO TO THE DOCTOR 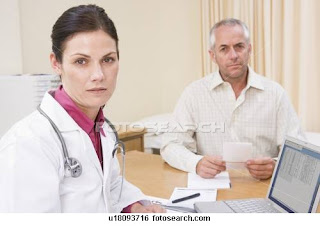 Being of the male gender, I think I have a bit of an insight to this.

The latest research shows that the reluctance of men to adopt a healthy lifestyle and visit the doctor may be fuelling a gender gap in cancer cases and deaths, experts say.

There is no known biological reason for this but it may be because women take better care of themselves, they said.

Experts said men needed to be made aware of the risks they faced.

It is thought half of all cancers can be prevented through lifestyle changes.

Ok that’s the “Official” version, the real reasons are:

GP surgeries are geared to women and children.

It is difficult to actually get an appointment, “urgent” is within 48 hours, “normal” is within about a week and “routine” is within a month.

There is no guarantee that you will see the doctor you want to, unless you are willing to wait.

It is annoying to have to keep ringing back to “grab” an appointment.

Most men don’t know their Doctors.

Most men don’t have the time to keep farting about trying to get an appointment.

Most men are of the opinion that if you can stand up, drive, eat, go to work and not throw up there isn’t much wrong.

Most men are intimidated by Doctors surgeries, the receptionists, the “touch screen” the fact that it is full of ill people, the waiting around, and then when you finally get into the consulting room the endless bloody nagging about “healthy life styles” giving up smoking, eating “five a day” drink less, get more exercise-WE KNOW about all these things.

Biologically men are not there to last 100 years we are built for procreation and supplying, not for the long haul.

Most men do not want to tell a woman doctor about the “droop”, or the runs or other symptoms, we really don’t want to know that there is a chance of something like cancer, we do not relish the thought of someone shoving what feels like a broom stick up our arse to “check the prostate” or eight feet of hosepipe up the same orifice for something called a “colonoscopy”.

Male Doctors have a different outlook, as they should being medics, they can consult with another male Doctor at any time, they are always first in the queue to have the test, they don’t have to wait all day in a hospital full of sick people without food or water because their name begins with Z.

Female Doctors have this mindset that says men are children: they need a good talking to, and should do what we say, because it is good for them.

Men don’t really care what is good for them; they want what they want, and they want it now, it doesn’t matter that it might give them a disease in thirty or forty years, our minds don’t work that way. We like our fags and beer, we like hamburgers and crisps, pork pies and chips; we expect to get a bit overweight as we get older.

We get enough nagging at home, we do not listen to reason, and trying to persuade us that if we change now we will still be here in sixty years, men don’t really want to grow old, we have all seen the “old farts” that smell of urine and drive like David Blunkett, and staggering down the road with their sticks really doesn’t fill us with joy.

Men in the main are not able to appreciate that living a healthy lifestyle will result in a healthy “old age”, we have all heard the urban myths about athletes dying of heart attacks aged forty, or the bloke that never smoked and died of lung cancer aged forty five.

So we think “what’s the point?” and carry on, another male concept is that if they have been smoking for fifty years giving up now will be a waste of time because the “damage is already done” and look at old bill, he smoked all his life, gave up when he was sixty and was dead a year later, case proven.

Most men know that the Doctors are right, that their wives are right, and that we should eat rabbit food, give up everything enjoyable and live a long and miserable life, looking like a beanpole and munching on raw carrots and limp lettuce leaves for our sustenance.

But we just don’t work that way.

The Angus Dei politico and Angus Dei-NHS-THE OTHER SIDE blogs are now back on air; this blog is also on the “other side” blog because it is important for us men to get our message across.