Same again at the Castle this bank holiday morn-dark, damp and dismal, the Talk Talk internet is on its last legs, the kitchen is empty and the new resident is eating me out of house and home.
Roll on tomorrow.

I see that Schools will be able to prioritise places for the children of teachers, cooks, cleaners and caretakers under a Government reform of admissions rules.
They will be given new powers to prioritise sons or daughters of staff members for the first time as part of a plan to give more power to individual schools.
Ministers insisted the change would allow heads to attract the best candidates and ease the burden on parent teachers.
But the move is likely to raise fears it could lead to a further reduction in the number of places available for other families in local catchment areas. 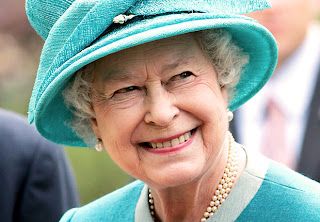 Britons can look forward to a four-day weekend in 12 months' time to mark the Queen's Diamond Jubilee.
Ministers and Buckingham Palace will announce the official timetable of events marking the monarch's 60 years on the throne this week - with highlights including a nationwide Sunday lunch and a river pageant.
The government will "put back" tomorrow's annual May Bank Holiday to Monday 4 June next year, and will add a special Jubilee Bank Holiday on Tuesday 5 June. An announcement confirming the plans is expected on Thursday.
Oh Joy….
Across to the land of tall, stoned people 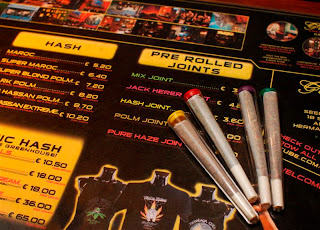 Foreigners will be banned from Holland's infamous cannabis-selling coffee shops under new anti-drug laws.
Under the new rules only Dutch residents will be allowed to enter the shops, which lawfully sell small amounts of cannabis to customers, the Daily Mail reported.
By the end of the year customers will have to sign up for a one-year membership, or "dope pass", to the shops.
The legislation, branded "tourism suicide", has been spearheaded by far-right politicians convinced that the move will discourage the "wrong" type of visitors.
"This law will put an end to the nuisance and criminality associated with coffee shops and drugs trafficking," a statement from the Dutch health and justice ministries said.
Drug tourists have been causing all types of trouble in the country, Joep Delsing, spokesman for the mayor of Maastricht, said.
"They block streets in the city centre, they don't respect parking rules, they are noisy and, when they go from one coffee shop to another, they urinate and vomit in the street," Mr Delsing said.
Sounds like any town centre in Blighty on a Friday/Saturday/Sunday night-There goes my weekend away…..
Dahn Unda 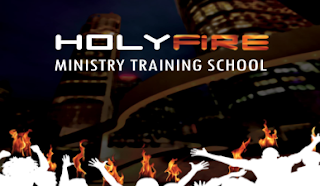 A wave of "supernatural" schools that claim to teach people how to heal the sick and even raise the dead are netting tens of thousands of dollars for fundamentalist Christian church coffers.
Hundreds of people across southeast Queensland flock to the courses every week, paying up to $720 to learn "faith healing" practices that allegedly trigger miraculous recoveries from broken bones, infertility and even cancer.
The Holyfire Ministry Training School at Park Ridge, which offers a subject called Healing the Sick & Raising the Dead, recommends taking children on "treasure hunts" public outings to practise healing on strangers. "Children are great to have on Treasure Hunts. They are less threatening," its material states.
The courses are linked to Bethel Church, a Californian evangelical group that is targeting Australia with its "School of Supernatural Ministry" brand.
Sounds a bit “sick” to me.
Still Dahn Unda 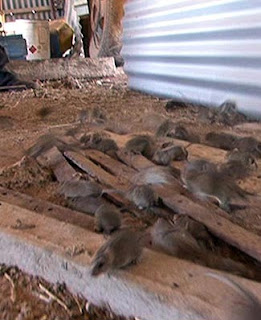 When South Australian farmer John Gregory entered his piggery he could not believe what he saw - mice attacking his pigs.
Since he first saw them dining out on his prized stock he has been at his wit's end about how to get rid of them.
Now, as a desperate last resort, he is covering his pigs at a farm property in Wynarka, 130km east of Adelaide, in engine oil to protect them from the mice, with the rodents apparently turned off by the taste.
"The mouse problem got really bad in April," Mr Gregory said.
"We went away in the school holidays and when we came back we drove up the driveway and it looked like the ground was moving - there were hundreds of thousands of them."
Mr Gregory, 50, said he put engine oil on his 15 pigs to protect them from the sun about once a month.
"But now I oil them every week, because the mice have run out of food and they're just eating anything, so they were climbing up on the pigs and chewing them," he said.

"The oil stops them eating the pigs because they don't like the taste."


And with mouse bait so expensive, he said farmers were resorting to home recipes to kill the vermin, which had multiplied to plague proportions because of summer rain producing great crops - ideal mouse food.
"Being farmers we're always trying to do things cheap," Gregory said. "I mix icing sugar and cement. The icing sugar attracts the mice, they eat it and then the cement clogs them up."
He could always buy a cat-or a thousand…piggin mice.
And finally:

Right a fair bit to the land of odd crinkly hair. 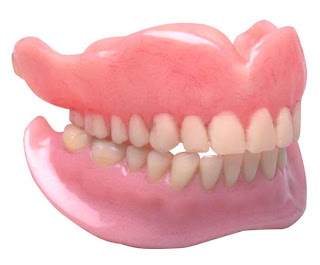 An elderly Brazilian man shot in the face escaped death when his dentures deflected a bullet headed for his brain.
A hospital official says that 81-year-old Zacarias Pacheco de Moraes was shot on Thursday while working in a bar he owns in the small western city of Alta Floresta.
Jose Marcos da Silva was quoted by Globo TV's G1 website on Saturday as saying that the bullet probably would have pierced Moraes' brain if it hadn't first hit his dentures before lodging in his throat. The official said the bullet will not be removed immediately because surgery right now would be too risky.
Silva said the patient was in stable condition but in danger of losing part of his eyesight because of the bullet's trajectory. He did not elaborate.
Good job they weren’t NHS dentures….
That’s it: I’m orf to close my Twitter account.
And today’s thought: The road to success is always under construction.
,