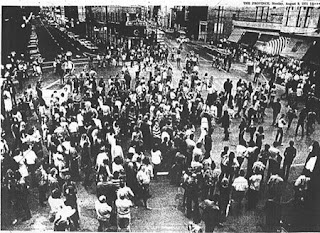 Superintendent David Hartshorn (Paul Lewis, The Guardian) Britain's most senior police officer with responsibility for public order raised the spectre of a return of the riots of the 1980s, with people who have lost their jobs, homes or savings becoming "footsoldiers" in a wave of potentially violent mass protests.
He said that banks, particularly those that still pay large bonuses despite receiving billions in taxpayer money, had become "viable targets". So too had the headquarters of multinational companies and other financial institutions in the City which are being blamed for the financial crisis.
And cited the Riots in Greece and France, as well as the “wildcat” strikes by refinery workers as the basis for his “armageddon” statement.
And said that “middle-class individuals who would never have considered joining demonstrations may now seek to vent their anger through protests this year.”
Hartshorn said he also expected large-scale demonstrations this year on environmental issues, with hardcore green activists "joining forces" with middle-class campaigners over issues such as airport expansion at Heathrow and Stansted. With the prospect of angry demonstrations against the economy, that could open the door to powerful coalitions.
Well: what can you say?
It seems to me that Mr Hartshorn is giving some nice ideas to the “rebels”, the thought of “middle class campaigners” taking to the streets is hardly something that will make us quake in our boots, but it may be enough to procure more funding for the Police forces, and give a reason for inappropriate action by the said police if anyone has the temerity to actually protest about the abysmal state of our green and pleasant land.
Don’t get me wrong I am on the side of law and order, but trying to scare the pants off ordinary Brits isn’t the way to make the “Powers that be” more acceptable in our eyes.
And to be honest who has the time or the inclination to “invade” the streets and produce a “Summer of Rage”

“The public good is in nothing more essentially interested than in the protection of every individual's private rights.” William Blackstone