Nice and cool at the Castle this morn, a touch of atmospheric movement and still not a drop of skywater, but I did rinse all the yellow stuff orf the Honda yestermorn.
Just returned from the stale bread gruel and his Maj’s food run dahn Tesco, and I popped into the forecourt to put a cupful or two of go juice in the motor, cheaper to stuff ten pound notes in the tank....

And talking of things that use hydrocarbons 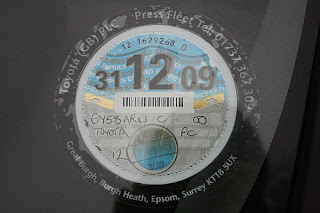 Son of a B......aronet George (I don’t have to worry about the doctor’s strike because I have BUPA) Osborne has come up with a cunning plan to screw drivers even more.
“Government” officials have begun private discussions with the motoring industry and drivers’ groups about an overhaul of the Vehicle Excise Duty (VED) rules.
One option being considered would replace the annual tax on cars with a one-off up-front charge on new vehicles when they are sold.
Allegedly ministers are “considering whether Vehicle Excise Duty should be reformed to support the sustainability of public finances and to reflect the improvements in vehicle fuel efficiency”.
The annual road tax for cars ranges from zero for those with the lowest CO2 emissions — which include electric and hybrid cars — to more than £200 for those with larger and less efficient petrol and diesel engines.
VED raises almost £6 billion a year for the Treasury, but official forecasts show that the revenue from the tax will fall as more people chose to drive low-emission cars.
The Office of Budget Responsibility this year cut its forecast for VED revenues by £100 million a year from 2014/15 to reflect the move towards cleaner cars.
Making up that shortfall would cost the equivalent of £20 a year for every motorist in the country. 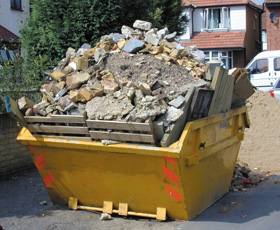 Britain faces a nationwide epidemic of fly-tipping and thousands of jobs will be lost because of a massive increase in charges to dump rubbish, waste companies warned last night as George Osborne was hit by a new tax row.
They also forecast that skips full of rubble would go uncollected around the country after an increase of nearly 2,500 per cent in the tax for dumping some types of rubbish in landfill sites.
The tax man has decided that the amount charged for dumping some waste materials soar from £2.50 to £64 a tonne.
The HMRC said last night it had merely acted because landfill sites were charging waste firms the wrong rates.
But the skip disposal industry, which employs between 20,000 and 30,000 people, says it will now cost £300 to empty a typical skip, compared with £144 before last week's tax rise.


All across the net thingy 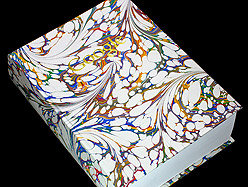 Two U.K. artist/geeks ran some computer code and replaced all 21,000 words in an average dictionary with the first Google image that pops up for each word.
The result is a 1,240-page tome of the best and worst of Google's image search algorithm, laid out in colourful columns, in alphabetical order -- starting with a picture of an aardvark. The thumb-indexed pages are bound in a swirl-patterned hardcover.
And apparently about half of the Google Book is "revolting medical photos, porn, racism or bad cartoons"
West and co-artist Felix Heyes hope to print a small number of the books for sale. Anyone interested in signing up can visit their websites at bewe.me and felixheyes.com.

Now, where do I start-Aardvark? 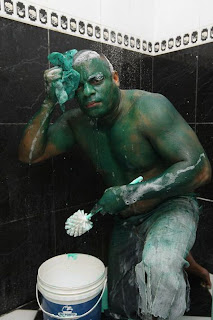 Paulo Henrique dos Santos is green with---paint.
He coated himself head-to-toe with green paint to become the “Hulk” for a running event, sadly the paint wasn’t of the body ilk but industrial green stuff.
After scrubbing himself and having “about 20 baths”, the 35-year-old was still coated in green.
Paulo, who also works as a DJ in Rio de Janeiro, mistakenly used the hardcore paint when the shop he went to didn’t have the brand he normally used
But after a team of friends and neighbours scrubbed for 24 hours, the offending paint eventually came off-along with most of his skin.....


Back in intellectual Blighty 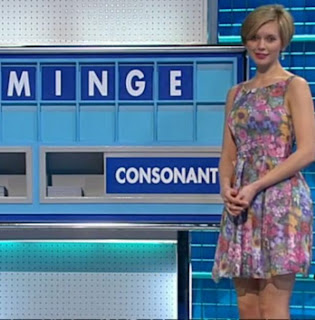 Countdown has done it again, the latest cringing cock up is-----MINGE, on yesterday’s show, maths expert Rachel Riley picked out the right sequence of consonants and vowels to spell out “that” word.
After the 30 seconds' thinking time, champion Suzi Purcell declared a seven letter word, MINGERS, which raised a small titter from the studio.

The joy of the English language....

Back over to the left and up quite a distance 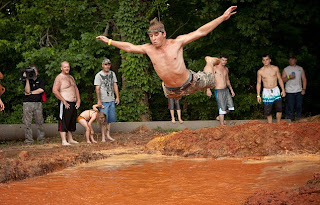 Americans have been taking part in a rather different competition - the 16th annual Redneck Olympics.
The event, which took place in East Dubin, Georgia, kicked off with the traditional lighting of a torch made from a beer can - and carried on with some rather unusual events.
Those taking part had the chance to bob for pig's trotters, throw themselves into mud pits and take part in toilet seat tossing in a bid to win one of the tournament's beer can-shaped trophies.
The Games originally began in 1996 - the year that the summer Olympics were held in Atlanta - and were created by a local radio broadcaster in response to a remark that the Games 'were being held by a bunch of rednecks'.
More than 5,000 people turned up to the first-ever Games, with a further 95,000 having attended in the past ten years.

Looks like a lot more fun than “our” multi billion pound debacle...

That’s it: I’m orf to sequence a genome for tastier tomatoes 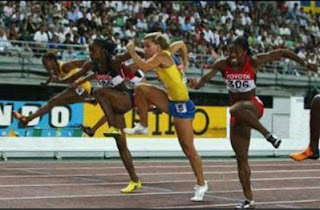