How U-Turn Cam votes: Larry does his bit: Old farts on tour: Testicle festival: Hanging out in Pompey: and Kids Compo.

‘Tis cold, cloudy and damp at the Castle this morn, it chucked it down last dark thing and after a 14 hour shift the kitchen is empty of other people’s problems.
My mobile rang at 6pm last eve and an Indian accented “lady” asked to speak with Angus Dei which confused me somewhat because he doesn’t exist, but I would like to know how “they” got my phone number.
I see that Brucie has finally gotten his knighthood, the Piss Poor Policy Coalition club of Millionaires is about to do yet another 180, and 250 Jobs are to go at Gloucestershire Hospitals NHS Foundation Trust.
In order-bit late, no surprise, and “we are all in this together”.
Here is the list of U-Turn Cam’s voting preferences in the House of Commons 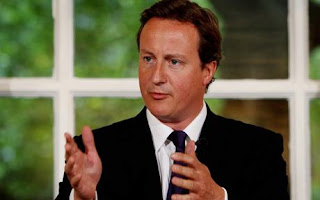 It does explain quite a lot.

Meanwhile back in Downing Street it appears that at least one resident is actually doing a proper job. 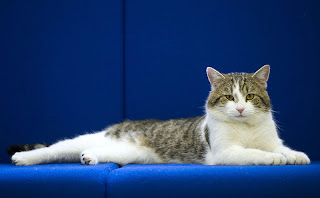 U-turn Cam has announced that Larry the Downing Street cat has made his first kills since being brought in to deal with rats at Number 10.
But the tabby tomcat has not been catching rats, but mice, said the Prime Minister.
Mr Cameron revealed that his historic London townhouse is infested with mice, and that he has even spotted one in the flat he occupies with wife Samantha and their children above 11 Downing Street.
''I'm a big Larry fan,'' the PM told ITV1's This Morning. ''We have got big mouse infestation in Downing Street and Larry has caught some mice.
''I actually took a picture of one in my flat on my mobile phone, because it was looking at me.''
Mr Cameron said he was not scared of mice, but added: ''Rats I'm frightened of, but I haven't seen any of those.''
So why does he keep so many around him in the sideboard?
Across the big wavy thing to the left 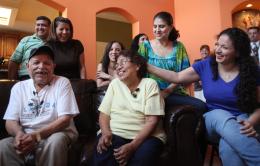 It started with a missed exit.
Headed to his daughter's house off West Road, Salomon Gasca, 78, along with his wife, Lorenza Gasca, 73, turned east onto Interstate 10 and kept going.
Three hours later, they knew they had gone too far. But they kept driving.
Salomon Gasca, who doctors say displays the early onset stages of Alzheimer's, suffers from poor eyesight. His wife cannot read. Neither could read the road signs indicating they had crossed several state lines.
Nearly 30 hours after they left their grandson's graduation party and 500 miles past their daughter's house, the Gascas pulled into what they thought was a rest stop.
"We'll be safe here," Salomon Gasca assured his wife. "There's police."

After circling the parking lot for several minutes to get situated for a long night's rest, the Gascas finally attracted the attention of one.

The family suggested that they would limit their parents' driving in the future as well as take precautionary measures to ensure they can be located easily in case of another accident.
How about a harness.....
Up a fair bit 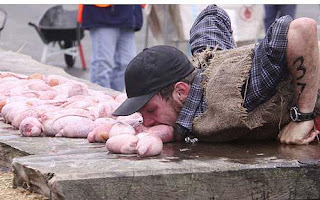 There's quite a deal being offered in DC this weekend, assuming you have the balls to stomach it.
On Saturday night, roughly 500 people are expected to gather at the Arlington chapter of the American Legion for the 7th annual Montana State Society Testicle Festival-- also known as 'Testy Fest.'
This juice frontier delicacy is a special joy for Northwestern folks living inside (or just beyond) the Beltway.
For just $20 ($25 at the door), the festival offers "all the Crown Royal you can drink and all the balls you can eat,” festival organizer Brittany Beauliue says Bull testicles, that is, also known as Rocky Mountain oysters or cowboy caviar.
Festival organizers say the event will have 60 pounds of prepared bull testicles, sliced, fried and peeled to perfection.
Yum, yum....
Back in the bottom bit of Blighty 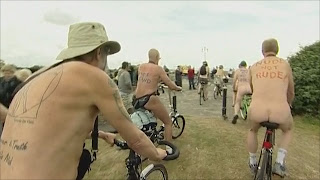 A group of naked cyclists have ridden through Portsmouth despite protests.
The World Naked Bike Ride, a nationwide protest over car culture and oil dependency, was held in the city for the first time.
Almost 1,000 people signed a petition to try to stop the event, which they described as "indecent" and "offensive".
Naked bike ride organiser Ian Henden said it was "perfectly legal". Police were on duty for the event.
The bike ride had been organised by environmental campaigners as part of World Naked Bike Ride, in which cyclists wore little or no clothes in participating towns and cities across the world.
The route, which was about six miles (9.6km), started at the Canoe Lake, and went through old Portsmouth, the city centre and then back through Southsea.
Section 66 of the Sexual Offences Act 2003 makes it an offence for a person intentionally to expose their genitals where they intend that someone will see them and be caused alarm or distress.
Bit nippy for that sort of thing.....
And finally
Still in the land of “accident” lawyers. 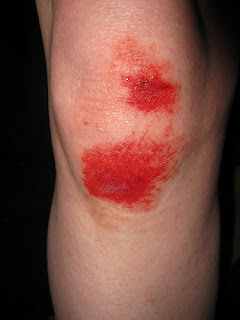 A schoolboy who fell over and cut his knee in a PE class was awarded more than £2,500 compensation and a schoolgirl injured in a game of Frisbee received an £879 payout.
The claims were part of a £57,000 compensation bill footed by Rotherham Council for mishaps and lost property at schools in the borough in the last five years.
A girl who fell down concrete steps on a tricycle got £6,250, another girl who broke her wrist trampolining won £1,092, while one girl who tripped on anti-slip felting was awarded £1,003.
In another case, a schoolboy received £5,750 when he sued a school after being splashed with custard when he was bumped into by a fellow pupil.
Rotherham Council also paid out more than £450 for mobile phones, jewellery, clothes and other items lost at school premises.
I blame the parents.
That’s it: I’m orf to hunt for bugs.
And today’s thought: A lawyer with a briefcase can steal more than a thousand men with guns.
Angus
Posted by Angus Dei at 08:10 2 comments