More lack of cold than you could shake a liquid metal gauge at this morn at the Castle, went dahn Tesco early to avoid the atmospheric perspiration-didn’t work, but they have now upped his fave food to £4 per box from £3.68 from £3.00 over the last week or so.


And I see that her Maj’s dog boy is in the doo-doo after the royal corgis took several lumps out of one of the ugly sister’s terrier, bet her Maj doesn’t get done for having dangerous dogs....


Just up the road from dahn ‘ere in ‘Ampshire 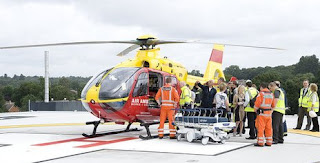 A £22m extension to a Surrey hospital is nearing completion with the testing of a new helipad for air ambulances.
Frimley Park Hospital staff and air crews have tested off-loading casualty trolleys into the resuscitation department below.
The emergency department opened in July and serves people in Hampshire, Surrey and Berkshire.
Until now, air ambulances had to land on school playing fields on the opposite side of the nearby M3.
Patients were then transferred to the hospital by road ambulance.
The hospital has recruited 23 helipad standby crew from within its existing staff.
The helipad is expected to become fully operational in September, the hospital said.
A dedicated lift links the roof to the resuscitation area.
The extension houses the new emergency department and day surgery unit, which the hospital said would be one of the best in the country.


Building a Brompton bicycle is a labour intensive task. It takes a factory of 115 skilled people, some 1,200 parts and six hours to custom build each individual bicycle.
Every stage is inspected to meet the high standard and all the engineering, brazing, and assembly is done under one roof in West London, just a stone’s throw away from where the bike was first conceived by owner Andrew Ritchies 1975.
Brompton currently export to 38 markets worldwide with their biggest demand in Japan and South Korea. The main market is city dwellers, not just commuters but people who have limited space at home, at work and even on a busy train.
Brompton is part of the Making it in Great Britain campaign.


And staying with the two wheeled transport thingy

From the land of alleged extradition to America comes the 'Hovding' helmet which is the brainchild of Swedish designers Anna Haupt and Terese Alstin who received requests for a helmet which would not spoil your hair-do.
Now, eight years after starting work on the device, their vision is finally being realised and the bizarre helmet is going on sale for around £350.

The helmet looks like a scarf and only springs into action when accelerometers and gyro-meters inside detect sudden jolt. If the wearer is involved in an accident the helmet inflates in under 0.1 second to cocoon their head.


But will it work when something falls orf the lorry you are undertaking and clouts you on the bonce?


Twelve people, dressed in bowler hats and smart suits, carried their own toilets down to the beach, placing them in a line on the beach front before dropping their trousers and sitting.

The protesters said they were demanding public toilet facilities, of which there are currently none, in the local area.
Beachgoers often have to ask local cafe owners to use their toilets, disturbing customers and inconveniencing the owners.
But Kym Hewitt, a local business owner, said he sympathised with those beachgoers faced with little choice.
"The public toilets are not up to scratch at all and quiet often we have a lot of people coming through to the cafe, sort of not really dressed for the cafe," he said.
The Australian Broadcasting Corporation reported that the local council is currently consulting the community about the best place to build the toilets

Back in the Home Counties 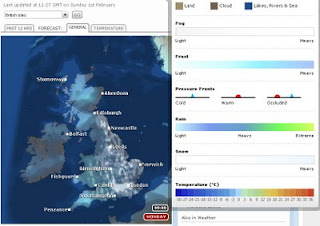 BBC weathermen have been forced to apologise after ignoring computer forecasts predicting showers across South East England on Sunday.
Apparently they doggedly stuck to their own assessment that it would turn out hot and sunny again across the region - only for a series of thundery showers to put a dampener on many people's barbecues.
Their predictions, in defiance of Met Office models, meant many were caught unawares as they headed out to enjoy what they thought would be a fine, dry day.
Instead the heavens opened as a series of showers built up from 11am, firstly across Sussex and Kent, and later across the rest of the Home Counties, London and East Anglia.
At 1.30pm BBC weatherman Philip Avery apologised for the errors on the BBC News channel.
He admitted: “There are thunderstorms there which were not represented in our forecasts over the past couple of days or so.”

It seems that the populace of blighted Blighty are no longer capable of looking up at the sky...


Over the warm salty thing on the left 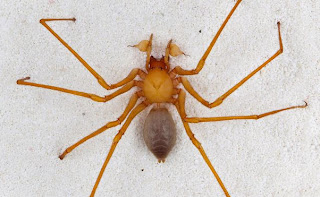 A fierce new breed of spider which has claws has been ­discovered, amazing ­experts that it has remained undetected until now.
Measuring three inches across it was found in the caves of Oregon, USA.
Scientists say the “cave robber” – which lurks in caves swinging on strands of silk snapping up prey with its oversized claws – is so ­significant it’s been given its own family name of ­Trogloraptoridae.
A spokesman for the California Academy of Sciences said: “That such a relatively large, peculiar animal could elude discovery until now suggests more species may be lurking.”

That’s it: I’m orf to hand back some of my genes 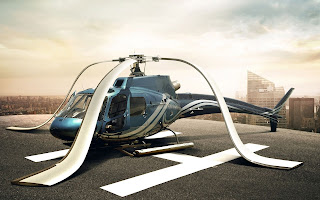