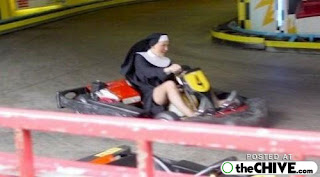 Three Nuns who hurried towards Pope Benedict XVI's holiday home after learning that he had suffered a minor accident were stopped by police for speeding at 120mph.

Sister Tavoletta, 56, was at the wheel of the Ford Fiesta, and two other unnamed nuns, aged 65 and 78, were passengers when police pulled them over.

When stunned officers asked why they were speeding, Sister Tavoletta said: "We had heard how the Pope had fallen over and we were on our way to make sure he was OK."

A spokesman for Turin's police, said: "Hopefully Sister Tavoletta will be making sure she confesses her bad driving the next she goes to confession. But in the meantime, she will have to pay the Euros 375 fine (£325)."

But Sister Tavoletta, who also lost her driving licence for a month, has not meekly accepted this rebuke. Instead, she will appeal against the fine with the aid of Italy's best known lawyer in driving cases, Anna Orecchioni.

Be careful what you wish for 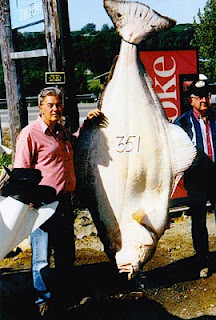 Dorset chefs who ordered a large halibut from a fishmongers were stunned when a monster halibut weighing a 22 stones was delivered.

It took five grown men to lift the enormous catch onto the table and then an entire day to chop it into 600 portions.

The giant halibut was ordered by cooks at the Bull Hotel in Bridport, Dorset and cost £1,326.
Weighing in at 309lbs - 140kg - the 10ft long halibut was trawled from the bottom of the North Sea.

Hotel owner Richard Cooper, 45, said they had intended to order a big halibut to coincide with a local seafood festival.

"We served it grilled or fried wrapped in pancetta. We even dished up some of it with chips."

He said: "Our chefs ordered a large halibut in preparation for the festival, but they weren't expecting anything quite like this.

Shaun Buller who owns the fishmongers, said it was by far the biggest fish he had ever dealt with.

He said: "It was a one-off buy. I was just curious to see what a fish that big looked like and how we could use it.

"We didn't want to make any profit from buying it and selling it on, it was interesting enough for us already.

"I've never dealt with a fish that size - it's a monster catch and a real novelty for us.

"It could definitely serve at least 600 people when it's cut up so it's great value for money.


You wouldn’t want one of those fish bones stuck in your throat. 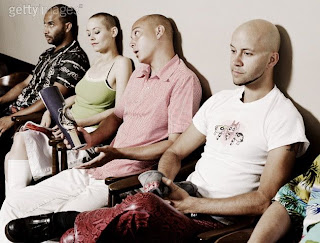 It seems that the average Briton will spend more than two years of their lives bored to tears, a study has shown.

It is the equivalent of 13 days a year, or 786.5 days over the average adult lifetime of 60.5 years.
The main reason for the boredom was 'having no money'.

"This survey is quite depressing, as it shows that most people are dissatisfied with the humdrum of daily life," said Scott O'Donnell of www.triviala.com, which commissioned the survey.

"It comes as no surprise to learn that a percentage of us are bored with work at times, and deciding what to eat on a daily basis can be tedious.

They do however try to cheer us up:

"But it's easy to avoid the dullness of television adverts, Big Brother and reality television as there are other simpler ways to enjoy life."

The study also revealed 55 per cent of us are bored of having to watch the pennies and budget to get through the month.

Another 47 per cent of people said they quickly became bored waiting in queues for people to serve them and 45 per cent said listening to people whine about feeling ill bored them.

Other things which bore people include reality television, work, their social life and eating the same food day in and day out.

Also on the list of top 50 things which bore people on a daily basis were feeling ill and golf on television.

Thirty eight per cent of Brits said they were bored of MP's claiming dodgy expenses and 32 per cent said they became impatient listening to hold music when phoning the bank.

Traffic and congestion was the biggest bore for 32 per cent, whilst 13 per cent were bored of taking the same journey to work everyday.

More than one in 10 people are fed up with their wardrobe of clothes, and wish they could have a makeover.

Whilst dieting proves tedious for 17 per cent of people.

Other 'bores' include sex life, waiting for nails to dry, worrying about job security, going to the gym, losing the football and waiting for a baby to be born.

Scott O'Donnell added: "Seven out of 10 people polled admit they log onto the internet when they are feeling bored and this can be a great way to keep the mind occupied."

The poll also reveals 3 o'clock in the afternoon as the time we are most likely to feel bored.

Top 5 things which make us bored:

1. Having no money
2. Waiting in queues
3. Hearing people whining about feeling ill
4. Waiting for internet pages to load
5. Being ill

And for most people, after logging onto the internet to alleviate their boredom, 51 per cent watch TV and 47 per cent eat.


So why am I bored then? 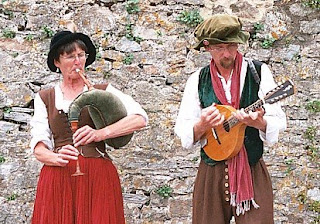 The Gooseberry Pie Fair in Galmpton, Devon, which has its origins recorded in an old rhyme - "In eighteen hundred and seventy three, the people of Galmpton did agree, to hold a Gooseberry Pie fair" lasts from noon to 5pm.

But the organisers have received an official warning after members of the public made complaints about the noise levels at this year's event on July 5.

Dr Martin Ridge, chairman of the fair committee, said the complaint was "ridiculous" and added that the event raised £8,000 for charity.

He said: "It's very disappointing that someone's taken this pot shot. One or two people obviously don't want to enter into the community spirit.

"The fair is held once a year on one afternoon, from noon to 5pm, not in the evening, so how could anyone object to it? It's potty."

Torbay Council's letter to the Gooseberry Pie Fair committee said the department has received complaints from a number of residents about the music causing a disturbance during the event.

It said: "We understand the music was live and amplified. We do not consider this to be incidental music, and therefore this type of entertainment will require a Temporary Event Notice to be submitted in the future.

"Any noise emanating from the premises should not be at a level that causes a nuisance to neighbours or residents.

"Although we will not be taking any further action on this occasion, we hope that this letter clarifies the situation for future events."


Is that where Victor Meldrew lives?

Be careful when you move house 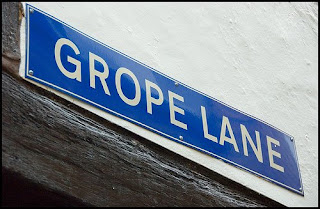 Street names in some of Britain's most salubrious market towns back to 400-year-old brothels and red light districts, research has found.

Experts have traced the origins of even the most innocuous-sounding road names, such as Finkle - or rather, Fondle - Street.

Dr Nigel Baker, archaeology researcher at the University of Birmingham, found most related to the red light districts and brothels that sprang up in towns such as Worcester, Shrewsbury and Hereford in the 16th Century.

Worcester's Grope Lane disappeared entirely when the Technical College was built by the River Severn, while Oxford changed its name to read Magpie Lane.

"The Victorians got rid of a lot of the Grope Lanes around the country, it has only remained in Shrewsbury," Dr Baker said.

"The name is often explained away today because it is a dark street that people have to grope their way along.

In fact, that's nonsense; it is a blatant reference to the sort of activity that went on there.

So; if you are thinking of moving, check out the street name first or you could end up in Crapstone, Ugley, North Piddle, Spanker Lane, Crotch Crescent, Wetwang, Slutshole Lane or Pratts Bottom.

Angus Dei-NHS-THE OTHER SIDE
Posted by Angus Dei at 09:48 3 comments