Well, the county elections are over and the country is singing the Blues, and Gord has done his version of the soft shoe shuffle and we still have almost the same Government but in different seats and wearing different hats.

More like a game of musical chairs than political nouse. 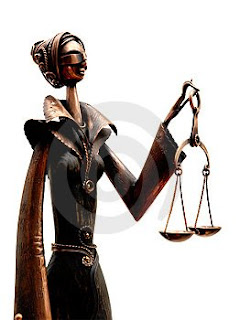 The British justice system, but only Sunday to Friday Lisa Partington, was given a curfew for assaulting another woman at a party but was told by a judge she could have Saturdays off "because it's summer".

Judge William Hart told Partington, 19, the terms of the curfew meant she had to agree to stay home every night of the week apart from Saturday - the same night she had carried out the drunken attack at a party.

At Gloucester Crown Court, Judge Hart sentenced Partington, of New street, Gloucester, to a 12-month community order with supervision and a curfew from 9pm to 7am every day for the next two months except Saturdays.

He said: "I give you one day off a week because it is summer and I don't think it is necessarily in your interests for you to be confined to your home every evening of the week for the next two months."

Partington had admitted assaulting Kimberley Moxham causing her actual bodily harm at a party in High street, Tredworth, Gloucester, on the night of Saturday Sept 6, 2008.


Nice to know we have a robust legal system that we can be proud of. 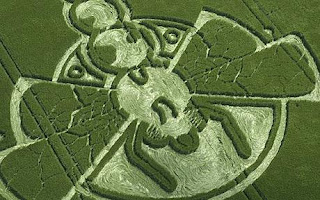 Another giant crop circle appears in Wiltshire, this time it is a Dragon fly, Crop circle enthusiasts claim the succession of animal designs have been created in an attempt make people more aware of the threat of climate change and predict they could continue throughout the summer.
"I imagine this will not be the last one we will see this summer and it has already been a busy summer for spotting them as they are well ahead of schedule."
In past years the crop circle season has typically run from July to August but already four have been found in barley fields stretching from Wiltshire to Oxfordshire this year.
They have been found across the ancient 'ley lines' - believed to have mystical qualities.
"People believe they will increase in frequency up to 2012 where there will be some kind of cataclysmic world event." 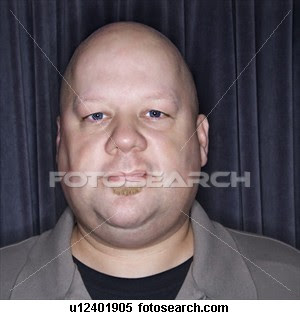 Space travel makes you ugly astro-biologist Dr Lewis Dartness revealed at the Cheltenham Science Festival that living without gravity would cause space travellers' bones and muscles not to develop properly, leaving them stunted and weak.
Meanwhile, the lack of effort needed to move around in low gravity and a temperature-controlled environment would mean that "future spacemen and women are likely to become pretty chubby."
And it gets worse. "Without gravity, fluid would float up to pool in the skull, which would cause the head to look permanently swollen out of proportion", Dr Dartness added.
Warming to his subject, he continued: "Also, with no need for hair to insulate the head or eyelashes to flick dust from their eyes, future humans may become completely hairless."
So space “men” will be short, fat, bald and ugly, that is me to a tee, where do I sign up. 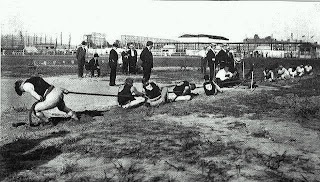 Pulling power A Chinese man lost his hand when it was ripped off at the wrist during a tug-of-war contest, Mr Shi, 30, of Shenzen, joined the beach tug of war competition with more than 100 of his colleagues.
"I had done tug-of-war before. It was all fun and safe," he told the Guangzhou Daily newspaper.
Entrants were divided into teams of five with Shi taking up the back position on his team. To stabilise himself, he wrapped the rope around his wrist and threw the loose end over his shoulder.
His match was heading for a draw when members of the audience started helping both teams to try to end the stalemate - without noticing Shi's hand trapped in the rope.
"I called on people to stop, but my voice was too quiet to be noticed," he said.
The competition was eventually halted when people noticed Shi holding up his damaged limb.
He was rushed to the Guangzhou Harmony Hand Hospital where his severed hand was reattached in a five hour operation.

That’s handy, they would have heard my voice if it had been me. 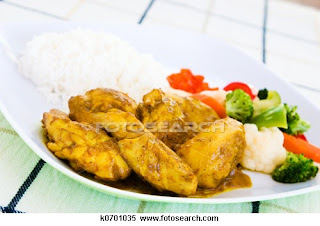 How to curry huge profits A London restaurant has launched the world's most expensive curry - at £2,000 a portion.
The dish, called the Samundari Khazana, or Seafood Treasure, contains caviar, sea snails, a whole lobster and even edible gold, reports The Sun.
Prahlad Hegde, head chef of Bombay Brasseries in central London, said: "There are still people out there with money to spend and this curry is a real experience."
Ingredients include Devon crab, white truffle, Beluga caviar, quails' eggs, sea snails, and an £80 Scottish lobster coated in gold leaf.
Prahlad explained: "The idea is from a basic Indian recipe I got from my mum but we are using the finest ingredients in the world."
The curry has been created to coincide with the DVD launch of Oscar-winning movie Slumdog Millionaire.

If I want my bum to burn the next day I can do it for £9.99 from the local takeaway. 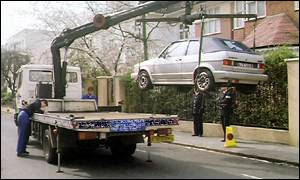 Blind justice police in New York repeatedly ticketed an illegally parked minivan for weeks before noticing that its occupant was dead, the deceased man's daughter has claimed.

The body of George Morales was discovered on Wednesday after a city marshal attempted to tow the vehicle away from underneath a flyover in the city's Queens District.

Jennifer Morales told the New York Daily News that she last spoke to her 59-year-old father in early May. She believes that he may have died from a heart attack while sitting in the family's Chevrolet Ventura.

Wonder if he will have to go to court for non payment.

“Only Robinson Crusoe had everything done by Friday.” Anon

Angus Dei-NHS-THE OTHER SIDE
Posted by Angus Dei at 06:33 1 comments