Up your insurance: Pickles poleaxes Pinewood: Boney land: Bull surfing: A bird in the Bombardier: The World’s worst Tat “artist”?: and a Cupid Stunt.

Gale is hanging around at the Castle this morn, and I daren’t even think where Dawn’s crack is, his Maj has discovered the joy of consuming odd things in the garden and then puking on my lap to show me what he ate.


And I managed to catch up on another few years sleep yester aftermorn.

I see that in “austerity” Blighty 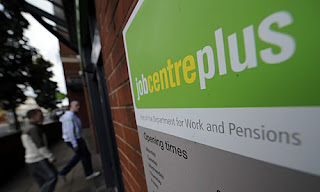 Insurers are charging jobless people more for car insurance, Research with three brokers for the BBC found that car insurance premiums averaged 30% more for those out of work but could be up to 63% higher.
The Association of British Insurers (ABI) said data showed unemployment was an additional risk for insurers.
AA Insurance Spokesman Ian Crowder reckons that "Unemployed people are likely to be distracted because of their circumstances, likely to be driving along unfamiliar roads and attempting to find specific addresses in search of job interviews."

Pinewood studios where the James Bond films were shot had planned to build a £200m complex on the 105 acres that adjoin its site. It would have offered 1,400 homes for those working on films, and permanent locations from 17 cities around the world for shooting movies.
But fat Pratt Eric Pickles, Communities and Local Government Minister, refused to grant planning permission for Project Pinewood on the grounds that "The loss of openness would not only be visually apparent, but would all but destroy the concept of the site as part of open Green Belt land."
A spokesman for the local government department said: "Just because the Prime Minister may think it is a good idea, you can't get round the law."


Right a mile or twenty two 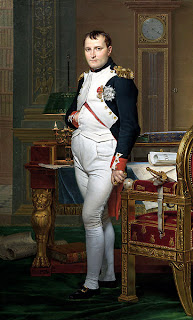 A French theme park is being planned in honour of Napoleon Bonaparte, almost 200 years after his death.
“Napoleonland”, the brainchild of former French minister and history buff Yves Jégo, is being touted as a rival to Disneyland – assuming, that is, it can gather the £180 million needed to leave the drawing board.
The plan is to build the unlikely amusement park on the site of the brilliant but doomed French leader’s final victory against the Austrians in the Battle of Montereau in 1814 just south of Paris.
The 1815 Battle of Waterloo, in which the Duke of Wellington ended Napoleon's rule in France, could be recreated on a daily basis with visitors perhaps even able be able to take part in the re-enactments.

That’ll be a short day then... 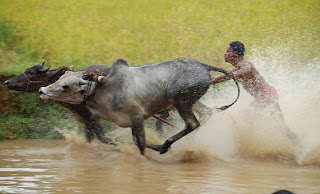 Each August, the rural Pathanamthitta villages of Southern India come alive with a festival dedicated to the harvest known as Maramadi. After the harvest concludes, yoked bulls are sent charging down a football field-sized rice paddy soaked in a 1/2 foot of water.
These crazed bulls are then chased down and surfed around the paddy by brave, half-naked participants in a kind of rugged chariot race with much more dirt. Most participants begin by holding onto the rope attached to the bulls, and move to hang onto the tail when their surfing begins.

Think I’d be “crazed” if someone shoved their arm up my arse as well (see pic). 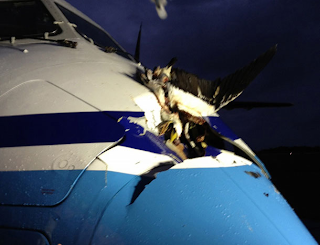 A Japanese Coastguard patrol plane narrowly avoided mid-air disaster when it was hit by an albatross.
The Bombardier DHC8-315 was flying 300 metres over the East China Sea when the bird smashed a one-metre wide hole in the aircraft.
But despite the dead bird being lodged in the plane’s nose, the pilot was able to fly for another hour on to his destination in Ishigaki, near Taiwan.
Nine crew members were on board the three-hour flight from Naha, on the Pacific Island of Okinawa. No one was injured.

So a bird in a Bombardier is worth two in the cockpit then.

Somewhere over the wet thing 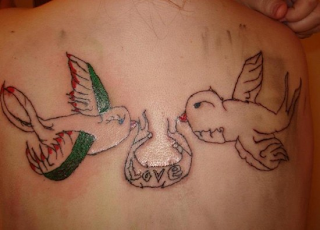 There lurks “Synyster Ink” who is to tattooing what the Piss Poor Policies Millionaires Club Coalition is to Government.
“Synyster Ink” even has his own Facebook page Synyster Ink’s tattoos on Facebook where you can see his “work”.


Right to the sub continent

A video has emerged on the internet, apparently shot in India, showing a man risking his life as he lies under a moving train.
The footage shows a man walking down the rail tracks as an oncoming train speeds towards him.
Just seconds before he is about to be hit by the train he throws himself facedown onto the ground between the tracks.
After the train sped just inches over his body, the man seems to pose for the camera.

Now that is a Cupid Stunt...

That’s it: I’m orf to trick a quantum. 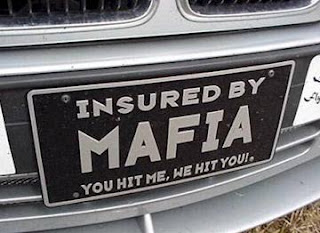