Medium amounts of skywater, middling atmospheric movement, minimal lack of warm and the threat of solar stuff at the Castle this morn, his Maj seems to be well on the way to being well, the butler is out scouting for fat, carbon neutral teenagers and I am orf dahn the tahn to get some things.


According to Pimco chief Mohamed El-Erian 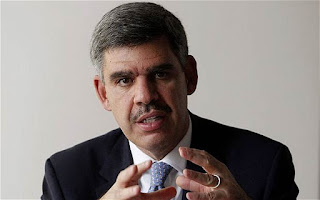 Broke Blighty risks seeing its standard of living hit if it leaves the European Union, the Pimco top knob reckons that beyond 2017, Poland rather than the UK will be among the three largest economies defining the scale and scope of European regional integration. “Let’s hope that he also has a Plan B that would limit the potential downside to Britain’s standard of living.”
Pimco is among the world’s most influential investment funds, managing assets worth nearly $2 trillion (£1.3 trillion). Andrew Balls – brother to shadow chancellor Ed Balls – is an executive in Pimco’s European unit.
Mr El-Erian said that while the promise of an in-out EU referendum was likely to “score some internal political points” it risked “some reduction in the country’s growth”.


Oh har fucking har, what growth, what standard of living, what a plonker...

And talking of the land of plumbers, builders and bathroom fitters 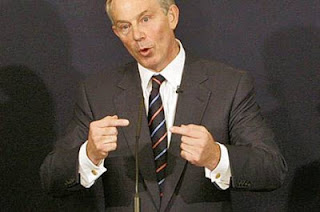 Ex Prime Monster Tone (I have run out of walnut varnish) Bliar has been given an award by businessmen in Poland to thank him for opening up the UK to Polish workers.
Tone was given the award at the annual Polish Business Leaders' Awards in Warsaw.

But he didn’t even “bovver” to turn up to attend the ceremony and his award was accepted on his behalf by Robin Barnett, Britain’s ambassador in Poland.

Bliar was given the award for backing the country’s efforts to join the EU and well as opening up the British labour market to the country in 2004.

A message of thanks featuring was reportedly screened at the ceremony in which the former prime monster said he has “a lot of admiration for Poland and the Polish people”.

Old coat hanger gob will probably have it on EBay by Thursday... 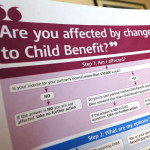 Allegedly Poland is home to the highest number of children in the EU and beyond who are receiving benefits claimed in Britain with– 25,659 – receiving welfare.
Just under 30,000 families with 50,000 children are claiming child benefits and tax credit for offspring who live outside the country but within the EU, as well as Iceland, Liechtenstein and Norway.
Parents can claim child benefits of £20.30 a week for their eldest child and £13.40 a week for each of their other children, while child tax credit is worth at least £545 a year.

Treasury minister Sajid Javid said: ‘The main purpose of child benefit and the child tax credit is to support families in the UK. Consequently, the rules for these benefits generally do not provide for them to be paid in respect of children who live abroad.’

He said Britain was forced to pay out the sums to children living overseas under a European regulation which protects the social security rights of nationals of all EEA member states.

The data will add to concerns about the impact of an expected wave of immigration from Romania and Bulgaria when temporary controls lapse at the end of the year.


That’s something to look forward to....isn’t it? 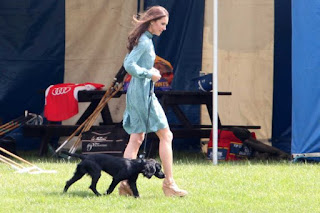 The Duckess of Cambridge’s dog has been voted the 50th most fascinating person in Britain.
The pet cocker spaniel was awarded the accolade by Tatler magazine, which compiled the honours from the most searched individuals on its online ‘Tatler List’ of notable figures.
Owner Kate was placed seventh in the list while the Duck of Cambridge Prince William came in at 16th.
Her old Maj was the highest ranking royal, Kate’s sister Pippa Middleton was placed fourth in the list, second out of the royals, while Prince Harry was awarded sixth place.
Other members of the Royal Family who made it onto the prestigious list include Princesses Eugenie and Beatrice, ranked ninth and 15th respectively, and Prince Philip who was voted in at number 36.
Sports presenter Clare Balding was voted the most fascinating person in Britain in the list, which will be published in Tatler on Friday. 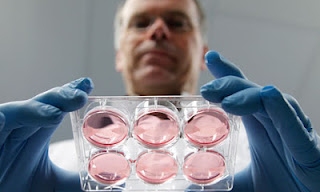 People like to eat meat despite the “personal health impact of frequent meat consumption, such as heart disease, obesity and cancer, or even the welfare of animals”.
But now there may be a solution: - scientists may have come up with artificial meat. Also known as ‘in vitro’ or ‘cultured meat’ and occasionally as ‘Franken-meat’, biological researchers are trying to find ways to make this “desirable” food product sustainably in laboratories.
The People for the Ethical Treatment of Animals (Peta), who have put up hefty cash reward to anyone who can successfully produce and bring to market in vitro chicken.
They have offered a $1m (£630,000) reward to the fist scientist to come up with in vitro meat. They launched the incentive in 2008 and the deadline has just been extended to June this year.
According to “someone” ‘We’re running out of water, land and time and our health budgets for meat-related diseases are through the roof. What a dream come true if you can give them meat without cruelty, environmental damage and clean as a whistle.’


East to the land of big holes


An entire building complex in China's southern Guangdong province has gorn dahn a sinkhole, the group of buildings was totally swallowed by the hole which appeared near the construction site of a new underground train station in Guangzhou, one of China's biggest cities.
The first building collapsed at 1620 local time (0820 GMT). The other three buildings then fell into the ten metre hole later that evening, according to China state television CCTV.
Around 300 residents from the surrounding area had to be evacuated and nearby roads were closed off.
No one was injured in the incident and an investigation was launched into what caused the hole to appear.


“Near the construction site of a new underground train station” I wonder...... 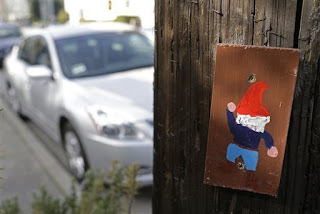 Small paintings of gnomes that have popped up on utility poles have become a community sensation in Oakland, prompting Pacific Gas & Electric Co. to say Tuesday that it will keep them in place for now.
The hand-painted portraits on 6-inch blocks of wood began going up last year in an apparent effort to brighten up the blue-collar California city. There are currently more than 2,000 of the images on utility poles, with many screwed to the bases.
The gnomes have red hats, white beards and brown shoes. Some of the images contain a mushroom.
Word that PG&E planned to remove the paintings sparked an outpouring of support from residents who said the gnomes add character to the city.
PG&E spokesman Jason King planned to meet Tuesday with the artist, who requested to remain anonymous, and a member of the City Council. The utility hopes to eventually relocate the gnome paintings from the poles to other spots in the same neighbourhoods.
"We've received a lot of feedback from residents who love the gnomes," King told The Associated Press. "We're looking for solutions. We'll keep them where people can enjoy them."
King said PG&E did not want to encourage such installations, explaining a proliferation of such images could cause damage or make it difficult for crews to access the poles.


That’s it: I’m orf to have a quantum sniff 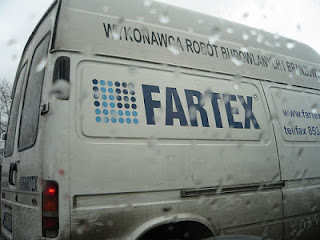