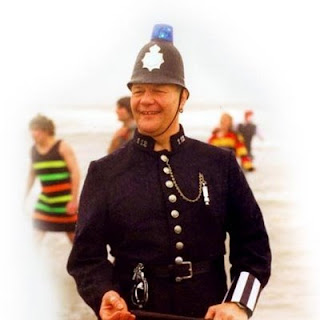 It’s enough to make you cry.

From Ananova, a motorist in Liverpool was stopped and questioned by the police-for laughing, yep; the SS seems to have landed.

Gary Saunders was using a hands-free phone when he burst out laughing at a joke told by his brother-in-law.
A few moments later he noticed a traffic officer flashing his lights at him and gesticulating at him to stop his Renault.
When Mr Saunders got out of his car, the policeman told him: "Laughing while driving a car can be an offence."
Supt Kevin Hagger, of the Mersey Tunnels Police, said: "There is no record of the incident in the system so it seems the gentleman was just spoken to by the officer and the matter not taken any further."
I think some retraining is necessary for the “laughing policeman”

Staying on the police theme-Ananova - Lighter sparks police panic police in Nanjing received emergency calls saying a man wearing a hunting rifle on his back was stalking the streets, they sent out six patrol cars to find the “offender”.

"On spotting the man, officers forced him to stop. The man was obviously very scared and said the gun was only a toy lighter, which he just won as an award in a restaurant."
Police tested the gun, but found that pulling the trigger resulted only in a small blue flame coming out from the end of the barrel.
Police gave the man a warning for alarming members of the public and confiscated his life-sized rifle lighter, reports the Yangtse Evening Post.

I expect the man was a bit “light headed”

Scope was previously described as marking the "beginning of the end" of the distribution of paper copies of intelligence reports aroundWhitehall and as "fundamentally changing the way the UK intelligence community interacts".
A limited version of the project, called Scope 1, is up and running after a two-year delay. It enables MI5, MI6, and GCHQ to communicate with each other more quickly and securely than before. They can call up the latest intelligence within 15 minutes rather than waiting 12 hours.


From the Register MPs vote to keep addresses private (theirs, not yours), those wonderful open minded MPs have voted themselves the right to withhold their names and addresses from publication. Candidates at Parliamentary elections will get the same right.

Last May, the High Court ruled in a Freedom of Information case that MPs' addresses should be public information. British citizens ought to be able to check on MP expense claims, or to monitor the living arrangements of individuals such as the Home Secretary.

In July, the government used an order in the House to overturn this, arguing that some personal information – particularly that relating to addresses and travel information – should be withheld from publication on the grounds of national security, and also the possibility that MPs would be harassed.


Doesn’t stop em getting slimed though does it?


And finally-Prime Minister's health records breached in database attack Personal medical records belonging to Scotland's rich and powerful - including Prime Minister Gordon Brown and Holyrood's First Minister Alex Salmond - have been illegally accessed in a breach of a national database that holds details of 2.5 million people.

The files contained names, ages, addresses, and occupations of the patients, in addition to medical information such as a list of any current medications and allergies to medicines, according to The Sunday Mail. The records of BBC newswoman Jackie Bird (an earlier version of this story mistakenly referred to her as "newsman") and former Labour leader Jack McConnell and his culture chief wife Bridget were also accessed.

An NHS Fife doctor has been charged with contravention of the Data Protection Act in the case and appeared on petition at Dunfermline in late December. He made no plea or declaration and isn't scheduled to appear again in court until later this year.


Maybe now the Gov will get off its arse and do something about data security.


"We don't know who we are until we see what we can do." Martha Grimes

NHS-THE OTHER SIDE
Posted by Angus Dei at 07:46 1 comments