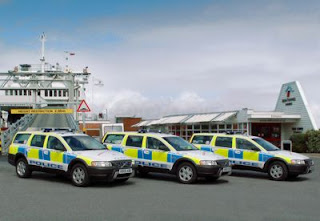 I see that Alan Johnson has come up with an election persuader, he has decided in his wisdom after 12 odd years of Labour Government that “Police should visit every victim of crime in England and Wales no matter how minor the offence.”

Slight snag there Alan; I have resided in the Angus castle now for eleven years, and in that time I have never seen a police “person” on patrol around the moat, there was apparently a beat officer who shoved a letter through my letter box about three years ago regarding a problem with car vandalising some two hundred yards away in a place I could not see.

And now, after extensive research I have discovered that the said police person has been replaced with two female semi coppers on patrol, whom/who I have also never seen.

I did try once to report some anti-social behaviour many years ago and had to ring four numbers to find a police station open at night, the nearest apparently is in Basingstoke some 17 miles away and was interrogated over the phone by a non police person who wanted my name address, date of birth and other assorted non essential information, only to tell me after twenty minutes (that I was paying for) that their were no "Proper" police persons available and anyway by the time that they got there the perpetrators will have gone.

So I took my life in my hands and told the little sods to bugger off, which they did, problem solved for me and the Police who didn’t have to get out of their nice warm Volvos and actually do some work.

And don’t start on about how much paper work the poor crim nickers have to do, and how they are dealing with “serious” crime, absolute bollocks, the Police are there to serve the public, they are there to keep us safe and prevent crime no matter how trivial it is to them, to us any crime is serious and should be dealt with appropriately.

Sadly as in every thing else in this country the police force is too PC, they don’t do water, they don’t do noise, but Alan Johnson thinks “Among the pledge's contents is a commitment to make it easier to contact neighbourhood police teams who, in turn, are committed to spending 80% of their time on duty in their community. (See above)

The document also promises that someone reporting a non-emergency crime can get an appointment with an officer within two days.”

Last month, a report by Her Majesty's Inspector of Constabulary, the national policing watchdog, said that 35 out of 43 forces had fallen short of the standards set out in their pledges.

It called on senior officers to do more to keep victims up to date on the progress of investigations and support dissatisfied members of the public.

So come on Alan, get the police back on the beat, and let the public see them, give them Blackberries so that they can send the relevant information back to the nick and have a non police person deal with the paperwork.