Lack of care: My blackberry is out of juice: Pompey Pensioners orf sex: Automatic Numpty: Fine bit of skidding: and a pilfered Pelican.

‘tis warm, calm and sunny at the Castle this morn, there was a massive ingress of broken adding machines into the study yestermorn, already been down to Tesco on the stale bread, gruel and pussy food run, last week I splashed out on sic crusty rolls-70p, this week I thought I would do the same-75p, thieving b’stards.....

It comes as no surprise that 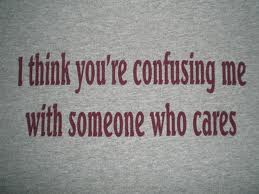 Elderly patients in half of NHS hospitals are not being properly fed or cared for because of a lack of “kindness and compassion”, the health watchdog warns today.
The Care Quality Commission says that too often staff pay more attention to paperwork than those they are looking after.
Unacceptable care has become standard in some trusts, with doctors and nurses talking down to patients, ignoring their calls for assistance and failing to help them eat, drink or wash.

It isn’t just older patients that receive piss poor care.....and don’t listen to all the excuses-not enough staff, not enough money, not enough time or too many managers.


Apparently there is a problem with the Blackberry (again)

Angry BlackBerry users have called for compensation as the internet outage that has crippled their smart phones continued through Wednesday and spread to North America and Asia.
In a statement, RIM, which makes BlackBerry devices, said: "BlackBerry subscribers in the Americas may be experiencing intermittent service delays this morning"
The firm faced growing calls for compensation from users all over the world. European, Middle Eastern and African BlackBerry owners have now endured three working days without mobile internet access, including email and instant messaging.
RIM made no comment on the whether it would offer any money back as it battled to restore services. Users bombarded its Twitter accounts with demands for compensation on Wednesday afternoon.


Run the video above, and all will be revealed.

It seems the pensioners of Portsmouth are simply not interested in sex, after a sexual health workshop for the over 60s failed to receive any interest.
Given the title Generation Sex, the workshop aimed to explore 'the realities of sex in the 21 century', encouraging the practice of safer sex among older people.
A spokesman for the event described it as having the potential to be 'frank, fun and factual' - however the event was cancelled due to lack of interest.
Portsmouth City Council's annual 60+ festival was to feature the workshop as a means of breaking down the taboo of people over 60 indulging in sex.
A spokesperson for the Council explained: 'The background was the risk of sexually-transmitted diseases in older people and the need to practice safer sex.
'It was decided to cancel the event because too few people booked places.'
Studies have shown that there has been a rise in STIs among over-45s, with a growing number of men and women over 60 becoming infected.

Given half a chance would be nice.....


Somewhere over in Europe 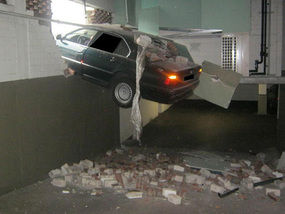 The rescuers had to stop the car toppling backwards and prop up the demolished wall before they could rescue the trapped pensioner from Rathenau, Germany.

He escaped with a minor bruise but the car was a write off and will have to be scrapped, the Austrian Times reported.


Forward, reverse, it’s all in the box somewhere. 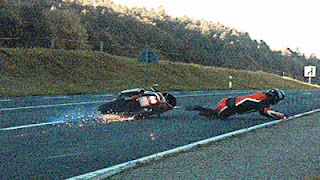 A biker is in trouble after being caught speeding - while sliding along the ground without his motorcycle.
Police in Switzerland say Boris Maier, 38, from Bern, set off a speed camera while careering helplessly at 67mph in a 50mph zone.
The speed camera failed to record what speed the bike was travelling as it slid down the road in a shower of sparks - focusing instead on the unlucky biker.
Traffic police believe he would have been going a great deal faster when he first saw the camera.
A police spokesman said: "It appears that he suddenly saw the traffic control measure ahead and lost control as he tried to slow down."
Police say the motorcyclist, who was wearing protective leathers, was unhurt apart from minor cuts and bruises.
He faces a fine and a police spokesman said he was lucky not only in surviving unhurt but also as he would have lost his licence if he had been going a fraction faster.
The incident happened between the towns of Cibourg and La Chaux-de-fonds, close to Bern and the French border.

Over to the left more than quite a lot 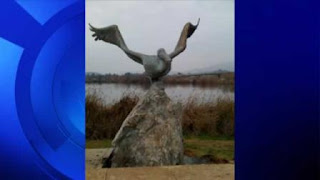 Authorities in the San Francisco Bay area town of Novato are in a flap about the theft of a park statue—a 700-pound bronze pelican.
The Marin Independent Journal says the statue, titled "Omay"—a Miwok Indian word for pelican—apparently was stolen over the weekend from a park near Scottsdale Pond.
The statue was commissioned by the city council in 2007 at a cost of $27,500. It is 9 feet tall with a 10-foot wingspan.
Novato police say it may have been stolen for its metal but the motive isn't clear yet. They're offering a $1,000 reward for information leading to the thieves.

And today’s thought: Learn from your parents' mistakes . . . use birth control.