It wasn’t me guv: Caveat emptor John: Laying dahn the lawn: 99 Wars: Automatic bed maker: and a Pox on us.

Damp, dark, dismal, dingy and decidedly dodgy at the Castle this morn, I don’t know what is in this skywater but everything is growing at more than a rate of knots meaning that the garden is in need of a full fettle. 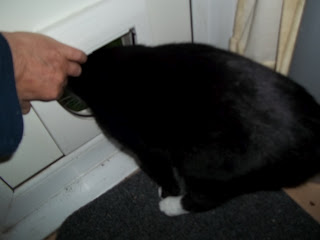 His Maj still has the hump because he can’t go out and is sulking by his cat flap, and there may not be a post for the next few days as I am going to my general medic to have BOTH elbows injected with white stuff.


Up in the Smoke at the Leveson “inquiry” 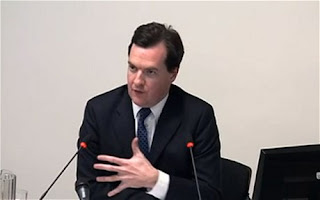 Son of a B.....aronet (and alien reptile in disguise) George (hear no, speak no, see no evil) Osborne has decided that he knew nothing about anything regarding whether Rupert Murdoch's empire should have been allowed to expand further.
But he did admit that he and David Cameron rushed to put the decision in the hands of Jeremy Hunt, the Culture Secretary, before taking legal advice.
And that he hired Andy Coulson.
Apparently George O reckoned that he was merely "an external observer" of News Corp's £8bn bid, which he described as a "political inconvenience", and explicitly denied speaking to either Jeremy Hunt or Vince Cable about it.
According to the soon to be Ex-Chancellor; he denied attending a private meeting in a chalet with the Murdoch’s in a Swiss ski resort months before the 2010 general election amid allegations that a deal had been done over the family's plans to take full control of BSkyB. He said the meeting had never taken place – but admitted there had been a meeting in a chalet the previous year. He denied that they talked about BSkyB.

Methinks he denies too much....

And according to the Current Bun 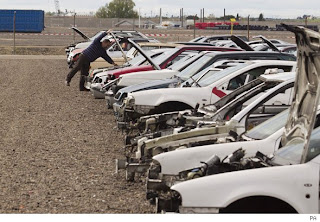 Nearly nine out of 10 used cars on sale are dodgy.
Almost a third are stolen or written off, or were bought with loans that have not been paid off.
Cars more than five years old are likely to harbour secrets from past prangs to being stolen.
Newer ones are likely to come with hidden debt.
The study found Renault Clio’s were most likely to have a skeleton under the bonnet – 93% had a dark history.
A quarter of those checked were insurance write-offs.
The Ford Focus and VW Golf were the models most likely to have outstanding debt secured on them.
One in 10 of both were being sold with money still owed, the study by monitoring service ­Experian AutoCheck showed – and buyers could have the car repossessed.
The two models also had a one in 10 chance of being ­write-offs or having their mileage clocked.
Essex was the write- off capital of Britain with 17% of motors on sale being reported as unroadworthy.

No surprises there then.....

Up Norf a bit from the Castle 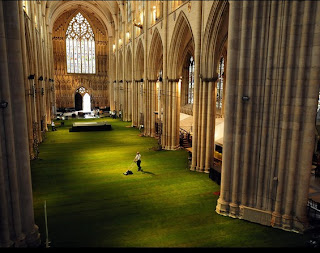 The nave of York Minster has been covered in 1,500 square metres of real grass.
The 14th century nave is being prepared for the York Minster Rose Dinner on Friday evening.
More than 900 guests will attend the dinner, being held to celebrate the Queen's Diamond Jubilee and to raise money for the York Minster Fund.
Guests will walk and dine on a 'living carpet' of grass inside the Minster.
The grass is grown in felt that has been recycled from textiles.

Seems that austerity in religion has been mowed dahn....

Across a bit to Blackburn 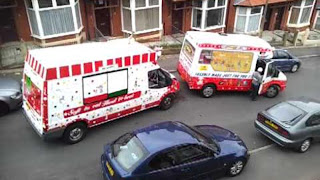 Witness Mobeen Yaseen – who caught the incident on video – says it is the latest flare-up in what has been a long-running rivalry between the two brands in the area.

The chap in the vehicle in front, Mr Yummy, is a vendor from another town whereas Mr Whippy in the back there is a resident ice-cream man. As Mr Whippy was serving a customer Mr Yummy pulled up alongside Whippy’s truck saying to the customer that he'd do the ice creams cheaper. “He then drove past Whippy’s van cutting off his route (following which the argument turned violent).”

Think I’ll stick to my big tub from Tesco’s


Dahn to the next ex-Euro country

Spanish bed specialist OHEA has designed a revolutionary new piece of bedroom furniture which could save valuable minutes in the morning rush to get ready.
The device has been designed to mechanically straighten out a person's sheets, duvet and pillow in less than 50 seconds.
Featuring two different settings, the smart bed could finally put an end to creased sheets and messy bed making.
Users can either manually begin the bed making process by hitting a button or choose the automatic setting which will see the device spring into action three seconds after someone wakes up. 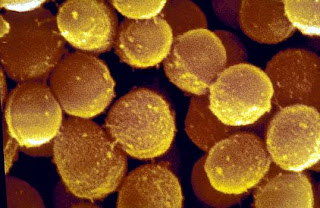 A super-strength strain of gonorrhoea is spreading.
The bacterial infection, which accounts for almost one in ten cases of the sexually transmitted disease, cannot be treated by drugs.
In the past year, the number of ‘superbug’ cases has more than doubled, according to health officials.
And even though Chlamydia is the most frequently reported STI, gonorrhoea – which affected more than 32,000 people worldwide in 2010 – has reached ‘critical levels’.
Marc Sprenger, from the Stockholm-based European Centre for Disease Prevention, said the drug-resistant strain of gonorrhoea could now be found in 17 continental countries – seven more than last year.
He also warned that the rise in superbug strains meant there was a risk gonorrhoea could become untreatable in the near future.
‘Public health experts and clinicians need to be aware of the current critical situation and should be vigilant for treatment failures,’ he added.
Gonorrhoea is a bacterial infection which, if left untreated, can lead to pelvic inflammatory disease, ectopic pregnancies, stillbirths, severe eye infections in babies and infertility.

That’s it: I’m orf to play a ditty on my MakeyMakey

And today’s thought:
Is this how you do it Olympics? 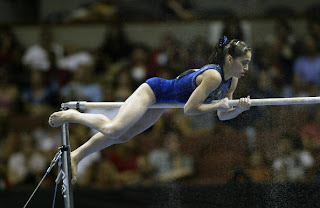