BF 3 during the lack of light, woke up today and thought that I needed new glasses but it was only yet another pea-souper; I see that John Allen Muhammad, the ‘Washington sniper’ was executed last night, is capital punishment still a viable option?

And; As I am sure you all know today is Armistice day, there is to be a special service in Westminster Abbey for the three remaining World War I veterans living in the UK who died this year, R.I.P Guys.

So what is a minority religion? 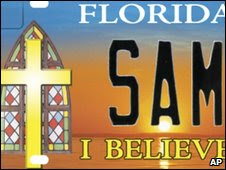 A US judge has ordered South Carolina not to issue a vehicle number plate with a Christian image and slogan.

The state legislature had approved a licence plate with a cross in front of a stained glass window and the words "I Believe" written along the top.

District Judge Cameron Currie said that the plate violated the First Amendment, which enshrines the separation of church and state.

A similar bid by a group in Florida last year did not pass state lawmakers.

The case was brought by Americans United, which backs the separation of church and state, on behalf of several individuals and Hindu and American-Arab groups.

Describing it as a "freedom of speech issue", he argued that given the state already permitted 103 speciality vehicle plates it was "ridiculous" that there was not one for Christians.

According to local media reports, several hundred people had registered to buy the plate.

But Judge Currie ruled that the law amounted to state endorsement of a particular religion. 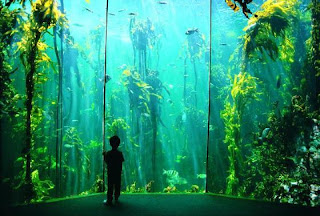 A pickup truck crashed into a 1,500-gallon (5,680-litre) aquarium at Tampa International Airport.

The driver and the young child sitting in her lap survived, but the tropical fish were not so lucky.

Yamile Campuzano-Martine, 36, lost control of her vehicle and drove into the saltwater tank outside the American Airlines baggage claim area on Monday night, airport officials said.

The driver had an unrestrained 6-year-old boy in her lap, said Brenda Geoghagan, a spokesman for the airport.

The aquarium was part of a public art programme.

She should be cited for having the brains of an anemone.

Another reason I don’t fly 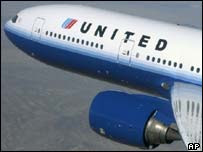 United Airlines has suspended a pilot who was arrested in London on suspicion that he was about to fly a Boeing 767 with 124 passengers while drunk, the airline said Tuesday.

The incident occurred Monday before Flight 949, which was bound for Chicago and would have carried 124 passengers and 11 crew. The passengers were accommodated on other flights.

The 51-year-old pilot, whose name was not released, was arrested at London’s Heathrow Airport and freed on bail pending the results of alcohol tests, London metropolitan police spokesman Simon Fisher said.

Fisher declined to give further information.

United, a unit of UAL Corp said the pilot has been suspended.

“Safety is our highest priority and the pilot has been removed from service while we are cooperating with authorities and conducting a full investigation,” UAL spokeswoman Megan McCarthy said.

“United’s alcohol policy is among the strictest in the industry, and we have no tolerance for violation of this well-established policy,” she said.

In another incident involving airline safety recently, the pilots of a Northwest Airlines jetliner became distracted and overshot the Minneapolis-St. Airport by 150 miles (240 km) last month.

How did he get to “about to fly” before he was stopped? 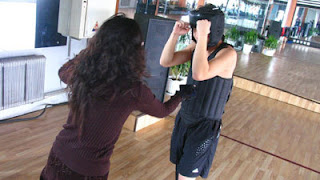 A Chinese man has launched a secret sideline - by renting himself out as a punch bag for stressed women.

Xiao Lin, a gym coach in Shenyang, in northeast China's Liaoning province, has not told his family about his new venture.

He told the Liaoshen Evening Post: "It fits in well with my day job. I needed more sparring partners anyway.

"By being a punch bag for women, I can make some money and also practice my self-defence skills and work on my fitness at the same time."

Lin charges 100 yuan (nearly £9) for 30 minutes for his services and says he has already had two customers since launching his new business.

"The first woman was about 25-years-old. She paid for half an hour but soon got tired and spent the rest of her time just chatting to me," he said.

"The second customer also only lasted for a few minutes but they both looked much happier afterwards. It does people good to let off some steam."

Beats kicking the cat I suppose.