What happened to my GPs surgery? 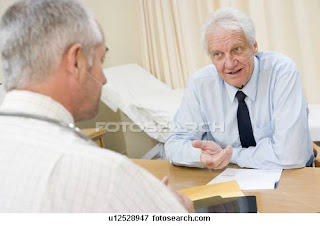 A bit of a taster, and a rant, "proper post" later, and I have decided not to change blogs/sites, too much hassel.

Off I went yesterday to have my flu jab, the day started badly and rapidly went downhill, I walked through the surgery doors which were covered in germ infested fingerprints, to the sight of twenty or so “patients” and accompanying screaming snot faced children, along with coughing, sneezing adults in various stages of decrepity, and stood in the queue at the ‘counter’.

After a ten minute wait for some dozy “patient” who needed to be told five times how to take a tablet I reached the front of the line and presented my letter from “all and sundry” to the receptionist.

A receptionist in my mind, and tell me if I am wrong is there to receive patients, book them in and provide any information that is relevant to their needs.

She looked up at me looked at the letter and said “you should use the touch screen” that infernal invention that relieves the so called receptionist of all responsibility.

My reply to said ‘receptionist’ was “you must be joking that thing is covered in festering germs” (or words to that effect) I came here for a jab NOT to get the flu not to catch it.

Her reply was “there is a bottle of hand cleanser on the table next to it” to which I replied “yes and nobody is using it, plus the fact that because it isn’t actually attached to the wall the people that have used it are covering it in germs along with the touch screen to pass on to the next poor sod” (or words to that effect).

After giving me a look which could melt plastic she grudgingly booked me in and grunted “take a seat” my reply was “thank you so much” (or words to that effect) and I managed to find a seat in the farthest corner of the room away from the melee.

The appointed time came and went, people came and went, the old farts (like me) clutching their flu jab letters, the touch screen was used by a small proportion of ‘patients’ some using the infected “hand cleanser” and some not, the germ infested fingerprints on the doors increased and finally the call came “Mr ######## to room seven, now room seven is in the farthest reaches of the universe and after what seemed like a half hours walk I arrived at the “flu jab room”.

The nurse was nice, and the first thing I said to her was “I don’t know why I am here” she peered at the ever present LCD screen and replied “neither do I, we have had a lot of these letters being sent out to patients who are not supposed to get them, we have even had a meeting a bout it” but immediately became defensive saying “it’s not the admin staffs fault, they are not medically trained and don’t know who should be sent these letters”.

Not wishing to annoy someone who was about to stick a needle in my arm I agreed fervently, and took off my jacket, the nurse then decided to take my blood pressure which apparently ‘hadn’t been taken for a while’ and oddly enough it was “normal”, probably about the only thing that is normal for me.

Anyway, jab done, forms filled out and a warning to ‘sit in the waiting room for five minutes ‘just in case’” I made the return trek to the heaving space, and decided “bugger it I’m off” and left using my elbows to open the germ infested doors.

I must admit it wasn’t a “pleasant experience”, maybe it is me, I avoid the GPs surgery like the plague (pun intended) I no longer know the people who work there including the doctors, and I feel like a stranger in a place that we used to visit at least once a week.

Or maybe it is the ‘new NHS’, treat patients like cattle. Push as many through to meet the targets, the new impersonal NHS where the Dept of Health is king and the patient is just a number.

I have been thinking of changing to another surgery but I fear that it might be just the same, that the clean, safe place with polite receptionists and helpful staff I remember from a few years ago is dead and buried and all I have to look forward to as I stagger into my dotage is to be treated as a statistic not a person.