A whimsy cooler at the Castle this morn, oodles of blue sky, the big yellow warm thing is once again climbing into the side opposite West and dawn’s crack showed itself many, many hours ago.


Getting fed up with humping the watering can around the grounds in the vain hope that “they” will do away with the hosepipe ban dahn ‘ere in ‘Ampshire, and I had to sleep in the sauna once known as “under the duvet” in order to prevent random attacks on my foot digits by his Maj.


And joy of joys the over clement atmospheric conditions will carry on next week. 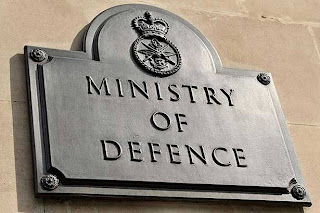 Apparently the Defence knobs are re-employing "thousands?" of civilians sacked by the Ministry of Defence as “consultants”.
While the MOD is supposed to “save” £4.1 billion and ‘lose’ 29,000 civilian jobs along with 25,000 military personnel an unknown number of ex Defence people (can’t tell you how many because the “MoD is “ not sure  how many former employees had been hired back as consultants.”) Are back on the payroll (after the Ministry of Dickheads shelled out £75 million in redundancy) at an estimated cost of £270 million to austerity blighted tax payers.

Nice to see that the PPPMCC is so competent...


In our dear old ailing NHS

Patients will be asked whether they would want their friends or family to be treated at their NHS hospital, with the results published to put pressure on the worst performing institutions, according to shit for brains U-Turn Cam.
NHS staff are already asked to take the “friends and family” test, but the Prime Monster will say that extending it to patients will bring benefits to the service.
The Prime Minister will also reveal a list of recommendations from nursing advisers on improving the quality of basic care patients receive.
In a letter to Dave the Nursing and Care Quality Forum made several other suggestions for improving basic care.
Ministers should ensure that nurses are “recruited for their caring nature and compassion as well as their knowledge and skills”, it said.
Hospital managers should also look at how nurses and their teams could use technology to free more time for caring, and to avoid patients being asked the same questions repeatedly.
Ward sisters and other senior nurses should be made more accountable for their clinical area, the panel added. 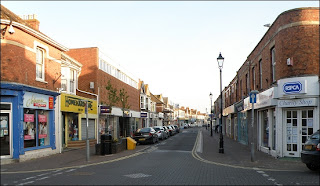 Traders in Burnham-on-Sea planned to hang several hundred feet of flags along the High Street to mark the Jubilee bank holiday event next weekend.
But Somerset County Council says every lamppost would have to be 'stress tested' to ensure they are strong enough to hold the decorations.
Town Clerk Eileen Shaw said: "I know there is an issue going on about the bunting and whether it can be put across the pavement and round the lighting columns.
"Personally, I would be worried about bunting going across the footway and back to the shops - the risk assessment would be worried. I know it's only minor but that's what happens these days." 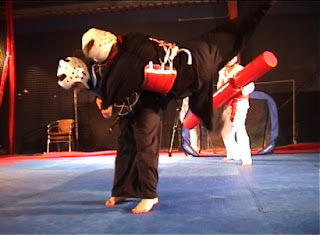 Footbrawl was invented during the late 1980s as a training aid for martial arts students. Despite violence concerns, Footbrawl has been growing in popularity and may soon become an internationally played sport.
New Martial Arts Football, or Footbrawl, is a full contact sport in which participants have to fight to score and survive the game in one piece. As in many other sports around the world, the main goal of Footbrawl is to get the ball into the net and score more points than the opposing team.

We’ve had that for years in Blighty, it’s known as association football.


West more miles than the Olympic torch will travel 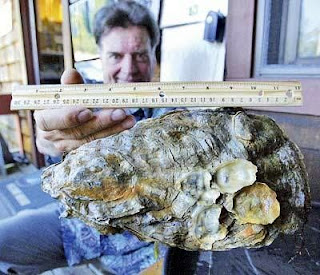 Richard Mesce, a retired navy pilot, has been searching for a big oyster since 2006 and he estimates he spent more than 100 hours over the last two years looking for the oyster by kayak, utilizing tide tables and also reading up on oysters.
And lucky old Dickey found one-Measuring 13 inches long and about 6 inches wide, the oyster is longer than the current recorded largest oyster, which measured in at 12 inches and 5.5 inches wide.
Since the oyster was covered by 8 inches of mud, Mesce guessed its age at about 80-years old. If the oyster really is the biggest, Mesce said Humboldt State University's Telonicher Marine Laboratory in Trinidad has agreed to keep the oyster in its aquarium and let it grow in a controlled environment.
"So, it'll stay the world's largest oyster," he said.


Until a bigger one is found…. Apparently the German town of Hamelin is in need of a new Pied Piper again after a growing legion of rats managed to knock out one of the town's fountains.
Rats had "chewed through electricity cables" operating the fountain, said, Thomas Wahmes, spokesman for the town council, which stands outside the German town's railway station.
The rats' fondness for gnawing on cables has also led to occasional problems with traffic lights near the fountain.

They fought the dogs and killed the cats,
And bit the babies in the cradles,
And ate the cheeses out of the vats,
And licked the soup from the cooks' own ladles,
Split open the kegs of salted sprats,

Made nests inside men's Sunday hats,
And even spoiled the women's chats,
By drowning their speaking
With shrieking and squeaking
In fifty different sharps and flats

Surprised they have enough water for a fountain...

That’s it: I’m orf to check the safety of me ‘elmet 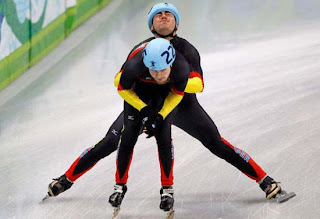