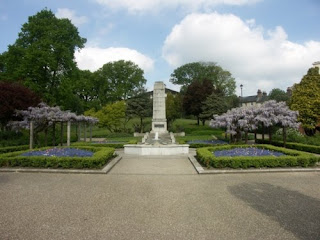 Today I will go down to the Municipal Gardens on the edge of the town where the civilian and military parts of Aldershot merge.

I will stand at the back of the usually large crowd of serving soldiers veterans and others who gather round the war memorial and I will think.

I will think of my dear old dad who survived the Second World War physically, but was left with nightmares and flashbacks, and I will think of the uncles that I never knew, one was lost in the D Day landings, another at sea bringing much needed supplies from America.

I will think of the brave men and women who are now risking their lives in other parts of the world, and of their families who live in fear, and of the millions of lost soldiers from the First World War.

I will think of the futility of war and the countless lives wasted by the need of some men to conquer and suppress others.

And in the back of my mind there is always one thought, the thought that how lucky I am because of those brave men and women who gave their precious lives so that we can live in freedom, without oppression.

And on my way home as I look at the kids playing in the streets and the husbands washing their cars, and the Sunday football league on the playing field I will silently thank those that have given their all for us.

And I suppose that many younger folk will think that I am an old fart and that all this remembrance stuff does not apply to them because it is not relevant to their lives, and I think that is the way it should be, because that is why all those lives were lost, so that war is not part of growing up.

And I will think that life could be worse, and that I must not take what I have for granted, but tomorrow is another day and my thoughts will fade until next November.