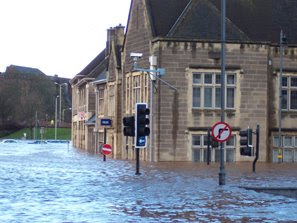 We are all doomed, well some of us are, Flood protection 'needs doubling': One in six homes in England is at risk of flooding, says the Environment Agency, and climate change will raise that number without better protection.

The agency calculates that funding for projects that protect communities from flooding from rivers and the sea needs to double to £1bn annually by 2035.

Without that, it says, economic damage worth £4bn per year could be the norm.

"The latest UK climate change data shows that the risk of flooding and coastal erosion will continue to increase in future due to rising sea levels and more frequent and heavy storms," said agency chairman Chris Smith.

"There are important decisions for us all to take about how to manage these risks to protect people, communities, businesses and the economy in future."

The properties that are most at risk are:

Vital infrastructure is also increasingly at risk, it says, with about one-sixth of the country's electricity infrastructure situated in flood plains.

Just a question: who allowed all these properties to be built on flood plains?

Oh yes it was the planners who wanted the extra council tax, along with the builders who wanted to make money, shouldn’t they be responsible for the cost of repairs or flood prevention?

DO WE REALLY GIVE A TOSS? 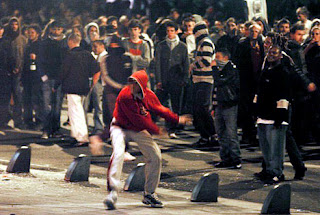 I received a comment yesterday from Christina in Greece, asking if I had seen what was going on in her Country.

My reply was- “Oh yes, I have been watching the news.
My slant on it, I don't think it would happen in the UK today, maybe 10 or fifteen years ago but not now. Since Thatcher, greed, self-need, and sod you I'm all right is the order of the day.Or in other words nobody gives a toss anymore, they wait for someone else to sort it out, and that includes the Government- they rely on the EU to fix the problems, because they can't or won't do what is necessary.Take to the streets! Good god that would entail actually getting involved!Not very likely I'm afraid.”

It was an off the cuff reply, but now I have had the chance to think about it, I stick by what I said.

And it makes me feel guilty.

I would fight to the death to protect someone dear to me, as we all would, but not for someone else.

We don’t as a society really give a toss, we all have our own problems, especially now, and other peoples problems seem remote and insignificant.

There are some-a lot of bloggers and campaigners that do, but they tend to “specialise” or focus on the “big” things.

Would we “get involved” if a teenager was shot dead by the Police in this country?

Did “we” after the Mendes shooting?

I certainly don’t think we would take to the streets, maybe write some letters to the “appropriate people” or sign a petition, but actually join a crowd of people in protest, and throw bricks and petrol bombs: No. We would I think expect justice: We would expect the perpetrators to be punished, and if that didn’t happen we would depend on the Media to highlight the injustice of it.

But actually get involved? Would I take to the streets: No. I wouldn’t because like most people I am law abiding and would expect the “authorities” to deal with it so that I could get on with my life.

A lot of people “complained” about the “Woss” thing, but he is still in a job, did we do enough ?

Have we become so insular in our lives that other peoples’ problems are no longer our problems?

I, like most people care about others, but would I “get involved”? Would I actually prove that I care? I sit in my nice warm room and write (when I can afford to have the heating on), and think I am “doing my bit” and maybe I am in my own way.

I have fought battles with the “Powers That Be”, intellectual battles, but I wouldn’t physically “get involved”, not because I am a coward but because I have seen the repercussions of such behaviour.

As I said to someone yesterday “I have learned that it doesn’t do to piss people off in those sort of circumstances”.

I have seen the damage it causes, not only to property, but to people as well. I have learned that in this country, the way to change things is from within, bit by bit, in a way that “they” don’t notice. Using the power of words, and opinion.

And don’t forget there will a general election before too long.

Perhaps we have evolved past the point of “demonstrations” and violence, or perhaps it is as I said at the beginning- As a society-Nobody Gives a Toss anymore.
If you want to delve into the Greek problems take a look at http://newcitizenship.blogspot.com/2008/12/riots-in-greece-what-is-not-reported.html

Links to this post
Email ThisBlogThis!Share to TwitterShare to FacebookShare to Pinterest
Labels: care, give a toss, responsibility, riot
Older Posts Home
Subscribe to: Posts (Atom)