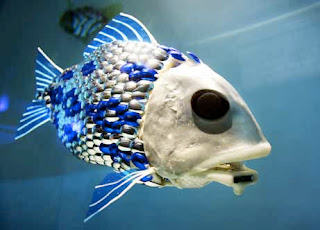 The sun is shining, the birds are coughing and the world is still an odd place.

"In using robotic fish we are building on a design created by hundreds of millions of years' worth of evolution which is incredibly energy efficient," he said.

"This efficiency is something we need to ensure that our pollution detection sensors can navigate in the underwater environment for hours on end."

Just a couple of comments: is introducing an “organism” consisting of “pollutants” to monitor pollution a good idea?


Saleswoman finds cocaine in box of bananas A stunned supermarket saleswoman stumbled upon 28 kilograms (60 pounds) of cocaine worth over a million euros (dollars) while unpacking boxes of bananas in southern Germany, police said on Friday.

The crates of fruit, flown in from Colombia and imported into Germany via the Belgian port of Antwerp, were probably mixed up when they were being loaded onto the delivery trucks, Ludwig Waldinger from the Bavarian police told AFP.

"Some dealers must have picked up the wrong boxes," he told AFP, adding that he would like to see the look on the faces of the drug dealers when they try to get their fix from the nutritious snack.

The 26-year-old shop assistant found the 26 packets of cocaine on Wednesday morning and immediately alerted the police, who are currently investigating the apparent blunder.


Maybe they should have been delivered to the pharmacy!

Baggy-trousered Aussie teen fined for cheeky flash An Australian teenager wearing baggy trousers and no underwear was fined after his pants fell down just as a female police officer was walking past, a newspaper reported on Thursday.

Trent Joseph Wroe, 19, was fined A$250 (119 pounds), and ordered to wear a belt, after the February 28 incident in Mooloolaba in the northern Queensland state, the Sunshine Coast Daily newspaper reported.

Police told a magistrate's court that Wroe deliberately bared his buttocks, but Wroe said he was wearing a pair of borrowed pants which were too big and fell down in the wrong place at the wrong time.

He said he would apologise to the police officer, and promised to wear a belt and underwear in future.


Going “commando” can be hazardous to your wallet.

Police say the driver slipped a note to a female teller, who provided an undetermined amount of cash, and then he drove away.

Lt. Guadalupe Salinas says the man was alone in the car and did not appear to display a weapon. Salinas told the Associated Press there's no indication that the robbery was an inside job.

Law officers declined to release the contents of the note. Police are reviewing bank surveillance video.

I don’t know, what next-drive through food!

And finally a link to some commercials: YouTube, no children, fish, dogs or bears were harmed during the making of these ads.

“Advertising may be described as the science of arresting the human intelligence long enough to get money from it.” Stephen Leacock

NHS-THE OTHER SIDE
Posted by Angus Dei at 07:52 0 comments