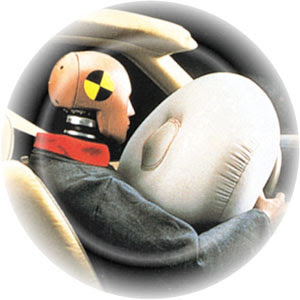 From Chron.com - Houston Chronicle a woman has been has been charged with child endangering after another motorist reported she was both breast-feeding a youngster and talking on a phone while driving.
Police say the woman faces up to 180 days in jail and a $1,800 fine if convicted of the misdemeanour.
I won’t make a joke about airbags.

Ipods are bad for your home-News Bizarre A Connecticut man was so engrossed with the tunes on his iPod that he didn’t realize his house was on fire — until his alarm company called.

Pomfret Assistant Fire Chief Edward Bates says Andrew Riley told him he was listening to music Thursday afternoon when the blaze broke out on the upper floor of his 2½-story house.

Bates says Riley didn’t smell smoke or hear the smoke alarm going off.
After receiving the call, Riley dashed upstairs and shut a door to the burning room.


Wonder what he was listening to?

From Ananova - Ultimate navel-gazing exercise yes the mystery is solved!

Georg Steinhauser, an Austrian “scientist” claims to have solved the riddle of belly button fluff. Dr Steinhauser made his discovery after studying 503 pieces of fluff from his own belly button in a three year study.
His observations showed that 'small pieces of fluff first form in the hair and then end up in the navel at the end of the day'.
Dr Steinhauser established that shaving one's belly will result in a fluff-free navel - but only until the hairs grow back.
Other suggestions for keeping the navel fluff-free include wearing old clothes, as they tend to shed less lint than newer garments.
A body piercing can also help, with belly button rings particularly effective at sweeping away fibres before they lodge.

Oh good, that’s been bothering me for years!

Also from Ananova - School bus driver takes kids to cops A school bus driver took his unruly passengers to a police station in Australia after he was hit on the back of the head by a lollipop.
"They were refusing to put seatbelts on," Mr King explained. "They were told to sit down and behave but within a couple of kilometres they were running around the bus and they started pegging things.
"Something hit me in the back of the head, which I didn't know at the time what it was, so I pulled over and stopped."
Ipswich police district inspector Kevin Keillor described Mr King's decision to involve them as "fantastic".
I know what I would have done with the little buggers, make them walk.
And finally.
Religion is bad for your bum-Ananova US police are hunting a man who stabbed his son in the bum for refusing to take his hat off in church.
The father, 58, and his 19-year-old son had been attending a church service in Baltimore, Maryland.
After the pair argued about the hat, the father went back to his car for his knife before stabbing his son in the left buttock.
Police have since issued a warrant for the arrest of the father who fled afterwards, reports the Baltimore Sun.
The son was taken to University of Maryland Medical Centre for treatment.

That’s not very Christian is it?
"Remember, people will judge you by your actions, not your intentions. You may have a heart of gold -- but so does a hard-boiled egg." Anon

NHS Behind the headlines
Posted by Angus Dei at 08:08 1 comments