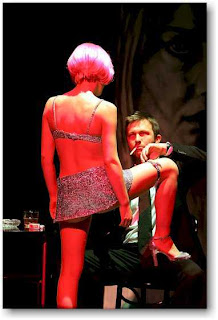 Sorry but I had to write about this.

Lapdancing 'not sexually stimulating from the Register.

“The Commons culture committee yesterday heard claims that lapdancing is "not sexually stimulating" during a hearing into the Licensing Act which is pondering reclassifying lapdancing clubs as "sex encounter establishments" - something which would make it easier for local councils to refuse them licences.”

That is bad enough but it’s the quotes that crease me up.

“Warr insisted the clubs were providing hospitality, rather than sex, and "astonished" the committee by explaining: "One of the biggest problems we face is that not enough people understand the business blueprint of our clubs. Actually, our premises are not sexually stimulating. It would be contrary to our business plan if they were."

Warr defended: "Then you need to go to a club, because the purpose of a club is to provide entertainment. It's to provide alcohol, it's a place of leisure. All right, the entertainment may be in the form of nude or semi-nude performers, but it's not sexually stimulating."

Davies, by now pretty well incredulous, the Guardian notes, persisted: "So if I did a straw poll of all the customers who came out a lap dancing club and said 'Did you find that in any way sexually stimulating?' I would find a big resounding fat zero?

I personally do not find David Beckham sexy whether he is in his “Kleins” or anything else, nor do I find the Chippendales sexy the little rodents are cute. But not sexy.
I have never been to such an establishment.
I would have thought that it would be easy to gauge how “sexually stimulating” it was, just count how many men are limping as they leave, or count the extra number of “poles” that there are in the club.
The House of Commons is now arranging a trip to an “entertainment centre” I have heard that they are having to lay on three extra coaches.