The usual meteorology at the Castle this morn-damp, dark, drear and a bit depressing, the study is filling up with suicidal thingamys and his (no nuts) Maj is busy chasing anything that moves-and doesn’t move around the garden.

James over at Nourishing Obscurity left an interesting comment on yesterday's post, "U-Turn Cam has said increasing UK contributions to the International Monetary Fund "does not put Britain's taxpayers' money at risk".

He assumes, quite rightly as it turns out, that people are thick as a brick, don't read and don't remember.

So he can get away with saying these things.

I agree 100%, what is the matter with us? Why are we willing to put up with a useless bunch of wankers in Parliament that are only interested in feathering their own nests at our expense?

Apparently almost one million people will be stripped of their incapacity benefit payments and forced to look for jobs under major reforms to the welfare system over the next three years, research has found.
The Coalition’s tougher rules on who can claim incapacity allowances will be felt most strongly in Labour’s heartlands of the north of England, Scotland and Wales, according to the study, which criticised the plan.
The report from Sheffield Hallam University, in the Deputy Prime Minister Nick Clegg’s constituency, warned that that “vast numbers” of people will be impoverished and left in distress as a result of the reforms.
Over the next three years, major changes are being introduced to incapacity benefit, including a tougher medical test for claimants, the re-testing of existing recipients of payments, and a limit on the length of time individuals are entitled to non-means tested benefits.
Disabled groups and charities have claimed the new tests are stigmatising the disabled and mentally-ill as “scroungers” in order to save money from the welfare bill.
Ministers insist that the reforms are not an attempt to stop “scroungers” but will help more people currently deemed unable to work find jobs.

Over the big, wet, salty thing on the left 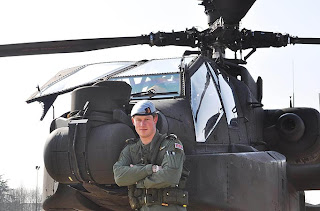 The mayor of a US town where Prince Harry is staying during helicopter training has warned him to be on his best behaviour with its young women.
Harry has been moved to Gila Bend, in the Arizona desert, for the last stage of a weapons course he has been undergoing in the United States.
Ron Henry, mayor of the 1,700-strong town, has put the fun-loving royal on notice that dalliances with the town's daughters are unlikely to go down well among the staunchly-Christian community.
Mr Henry, 64, told the Daily Mail: "There are probably some fathers here who would go to extremes to protect their daughters.
"Some of the dads won't take too kindly to a Prince fornicating the night away."

Time will tell-in about nine months when a plethora of red headed babies wearing Nazi uniforms arrive on the scene,

Back in the Northern-ish bit of Blighty Paul Cavanagh’s attempt to teach a group of employees how to use a ladder got off to bad start when he climbed up without his hard hat.
One of the group threw him the headgear as he stood on the ladder, which was leaning against a semi-detached house.
Mr Cavanagh, who was tethered to the ladder, took his hands off several times before his already shambolic demonstration took a turn for the worse.
He slipped around the ladder, which crashed sideways over a fence and into a neighbouring garden – with Mr Cavanagh still tied to it.
As he lay sprawled, one worker – who posted the footage on YouTube – said: ‘That proves the system doesn’t work.’
Mr Cavanagh has been suspended from his job at Morrison Facilities Services, which works on behalf of the Gateshead Housing Co to manage properties for the local council.


Chris Morgan, the company’s safety boss, said: ‘We are dismayed by this isolated event. 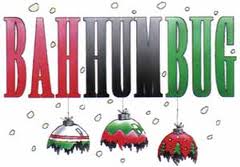 Faced with the difficult task of balancing a budget in austere times, officials in New York's Suffolk County said on Friday they had no choice: they had to sack Santa Claus.

The county executive said he could not justify carving out $660 from his $2.7 billion budget to pay David McKell, 83, a World War II veteran and former homicide detective, to don his Santa suit for the tenth year running and greet children on Long Island.
He said that some 750 county employees were facing layoffs as a result of budget restraints, including what he described as a $20 million cut in state aid to the county's health system.

"Let either the private sector come forward with a donation, or, better yet, let's tap the volunteers in the community," he said.

Levy was quickly called a Grinch by his opponents.
Nah; he’s not a Grinch, just another politician who cannot see that saving just a few bucks will cause misery to hundreds.


East more than a lot to the land of Euro snakes 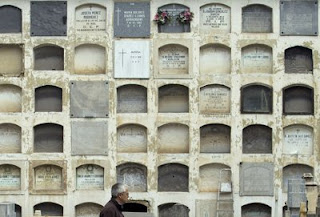 A Spanish cemetery has begun placing stickers on thousands of burial sites whose leases are up as a warning to relatives or caretakers to pay up or face possible eviction.
Jose Abadia, deputy urban planning manager for northern Zaragoza city, said Monday the city's Torrero municipal graveyard had removed remains from some 420 crypts in recent months and removed them to a common burial ground.
Torrero, like many Spanish cemeteries, no longer allows people to buy grave sites. It instead leases them out for periods of five or 49 years.
Abadia said the cases involved graves whose leases had not been renewed for 15 years or more. He said Torrero currently had some 7,000 burial sites with lapsed leases out of a total of some 114,000.
He said leases generally lapsed because the relatives or caretakers had died or had moved house and failed to renew the contract. He said in other cases, with the passing of year’s family descendants sometimes no longer wanted to pay for further leases.

Maybe they could be buried in the land that the "authorities" have grabbed from people who have had their houses demolished...

West about as far as you can go in Blighty

Ian Jones, chief executive of Volunteer Cornwall says the county - where the Prince of Wales owns tens of thousands of acres as head of the Duchy of Cornwall - should adopt its own currency.
He said Cornwall should consider "radical ideas" to protect itself in the economic downturn.
The Cornwall currency could be modelled on local money schemes such as the Totnes and Lewes pounds which were created by the Transition Network movement, he said.
Several Cornish mining areas in the 19th century set up their own banks and issued their own banknotes.
In 1974 banknotes were issued by pressure group the Cornish Stannary Parliament partly "to raise money to aid it in the restitution of Cornwall's legal right to partially govern itself".

Wonder what the ooaar/sterling exchange rate will be? 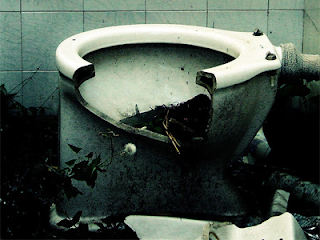 Exploding toilets injured two workers at a federal building in Washington D.C because of a plumbing malfunction that blasted out tiny shards of porcelain.
A woman from the General Services Administration (GSA) building was taken to a hospital with serious cuts to her leg from 'flying debris' caused by the toilet blast.


Another loo exploded within minutes of the first, injuring another employee using the bathroom at the same time.
Chuck White, vice-president of Technical and Code Services for the Plumbing-Heating-Cooling Contractors Association, said that while he's never seen an exploding toilet himself, it is something you read about in plumbing textbooks.
'If you're not careful about how you release pressure, the contents of that bowl will come up like old faithful,' White told the Huffington Post. 'Plus, you would have the surprise factors,' he added.
The explosion was because of a control system malfunction that caused a rise in pressure in the water storage tank, GSA spokesman William Marshall said. This in turn caused the plumbing system to 'malfunction' when flushed.
The 2,500 federal employees in the eight-storey building were sent a memo declaring bathrooms off-limits because the plumbing had malfunctioned and the situation was dangerous.

I have a lot of back pressure but have never exploded....

That’s it: I’m orf to cancel my holiday in Italy.


And today’s thought: How do men sort their laundry? "Filthy" and "Filthy but Wearable"