They’re Back!: Charlie-over there: Team Wayne: Dizzy Ducklings: Gun ships up for grabs: Septimus Quartus: and No bumping at Butlins.

Same again at the Castle this morn, sunny, calm and cold, but “they” are threatening oodles of wet stuff from the sky along with a lot of banging and flashing on Saturday.
The kitchen is empty of anything broken or fixed, the Honda is yellow again, the Butler is still on his hols and I am looking forward to a nice quiet weekend. 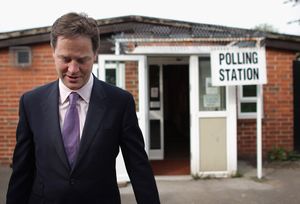 The local elections are over, apart from the endless speculation from the media about who won or lost and poor old Cleggie is it seems not a popular bunny-shame.
Up a bit to Oxfordshire 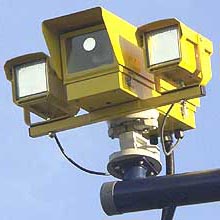 The number of speeding fines issued in Oxfordshire more than doubled in the first month since cameras were turned back on after being off for eight months.
Funding was withdrawn for 72 cameras and 89 mobile sites last August as part of budget cuts but they were reinstated on 1 April.
The numbers of drivers caught in July 2010 was 2,286, while the figure for April 2011 was 5,917.
The figures were obtained by BBC Oxford from Thames Valley Police.
They showed about 200 people a day were being caught speeding in the county since the cameras were turned back on.
Whoops…..
Left a lot 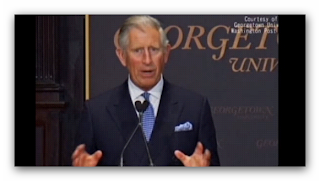 Prince Charles, who is in Washington for a three-day visit, spoke to students at Georgetown University about environmentally friendly farming.
In his speech, the Prince of Wales criticised government subsidies for large-scale agriculture and encouraged more government and business support for organic and environmentally-friendly food production.
The United States spends tens of billions of dollars a year on such subsidies.
At least he isn’t “over here” hugging trees and talking to the plants.
Back in Blighty

The “Team Wayne” Three Peaks climbers picked the wrong mountain, half got injured, and then they got lost.
They started the Three Peaks Challenge by climbing the wrong mountain – and it all went downhill from there.
They climbers scaled the Highland peak of Stob Ban instead of Ben Nevis – more than 5km (3 miles) away – after thinking it looked the same.
Their tale of woe continued when they headed south to the Lake District, where three of the six injured themselves and two more got lost taking on Scafell Pike.
Mercifully, ‘Team Wayne’ decided not to even bother with Mount Snowdon in Wales.
But they still managed to raise £10,000 for a leukaemia charity in memory of their friend Wayne Wilson, who died from the disease in January, aged just 26.
Bless, at least they did it (or didn’t do it) for the right reason.
Another You Tube snippet
A 22-second video of five ducklings transfixed by a spinning yo-yo has become one of the most shared videos on YouTube this week.
After being uploaded at the weekend, the video has already been watched almost 200,000 times and ‘liked’ over 560 times.
There is little in the way of information about the clip apart from the fact it appears to take place in a pet shop and the yo-yo is being spun by a young child.
The most fascinating aspect of the video is the reluctance of the ducklings to take their eyes of the yo-yo at any time – apparently willing to keep spinning their heads round and round until they fall off.
As they yo-yo spins faster and faster, the ducks keep their heads spinning and spinning, much to the amusement of those present.
And yes, I know it isn’t really a yo-yo…..
Right many, many miles 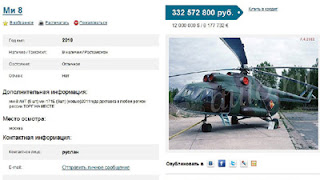 Cash-strapped Ukrainian military leaders are selling off their lethal fleet of helicopter gunships - on an Ebay-style website.
The deadly Russian-built Mil Mi-8 and Mi-171 attack aircraft are armed to the teeth with guided anti-tank missiles, rockets and armour-shredding chainguns.
Punters can spend up to £7.3 million for a hardly used fully loaded model with cheaper, older transport choppers going for a bargain £266,000.
"We can deliver anywhere," says the ad, posted by the Ukraine's defence ministry.
Maybe the U-Turn Coalition could pick up a few bargains.
Dahn Unda 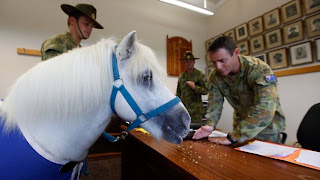 One of the Defence Force's most infamous and mischievous mascots is being retired after almost two decades of loyal, but ill-tempered, service.
Septimus Quartus, a white Shetland pony stationed with Townsville's 1 RAR for the past 18 years, has been leading the battalion on parade and making a name for himself as a troublemaker.
He has been demoted numerous times over the years for various infringements and his tendency to bite.
Executive officer of 1 RAR, Major Simon Moore-Wilton, says Septimus Quartus was a livewire from the moment he joined up.
"It is true that Septimus Quartus has made a few infringements on a few occasions; biting and other transgressions," he said.
"He has been demoted in rank a couple of times now, but he is now a sergeant and quite proud of his three hooks.
"There is a tinge of sadness to see him go."
The pony will be retired to greener pastures during a ceremony in Townsville next week.
But the trying times may be not be over, he will be replaced with his equally bold son Septimus Quintus.
Some people never learn.
And finally:
Butlins bans Bumpers 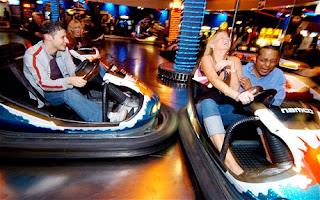 When Sir Billy Butlin introduced bumper cars to Britain more than 80 years ago, it can be assumed he expected holiday makers to have fun on the fairground ride bumping into each other.
But what Sir Billy did not foresee was the modern culture of health and safety that has not only introduced seat belts and insisted everyone drives in the same direction, but banned bumping.
Staff at all three Butlin resorts in Bognor Regis, Minehead and Skegness are instructed to ban anyone found guilty of bumping into each other in the electric cars equipped with huge bumpers.
Bemused customers who assume that the ‘no bumping sign’ is in jest are told to drive around slowly in circles rather than crash into anyone else for fear of an injury that could result in the resort being sued.
Butlins confirmed that people are not allowed to bump the bumper cars for “health and safety reasons”.
In fact the resorts insist on calling the experience Dodgems rather than bumper cars.
What next-airbags, crash helmets and roll over cages?
That’s it: I’m orf to track a Hedgehog.
And today’s thought: What do gardeners do after they retire?
Angus
Posted by Angus Dei at 07:11 0 comments