IS IT ME OR ARE WE BECOMING WHIMPS? 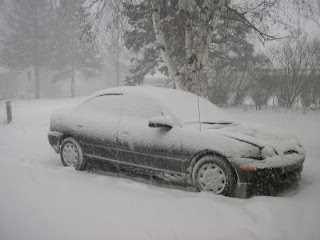 Over the last four days schools have closed because of “the weather”.

“Hundreds of schools have closed in England, Wales and Scotland following the latest heavy snowfall.

Worst affected is Wales where 600 schools have shut, and as much as 5 - 10cm (2 - 4in) of snow is predicted to fall across southern and mid-Wales.

Around Bristol 200 schools were also reported to have closed for the day.
Other counties affected include Shropshire, Derbyshire, Lincolnshire, Norfolk, Devon, Northamptonshire, Staffordshire, and Leicestershire.

Snow has also hit the north of Scotland, where many schools have closed and roads are blocked.

In Aberdeenshire and Aberdeen, more than 150 schools are shut. Grampian Police have warned people only to make essential journeys.

Powys council said it took the decision to close all its schools after taking weather advice, and to "remove any uncertainty".”

This has led of course to thousands of parents having to take time off work to look after them, and has cost hundreds of millions to businesses.

Has the “nanny society” finally managed to crush any form of initiative and pride of kids, parents and teachers?

Or is it just that the “I can’t be bothered” ideology is pervasive among children and adults?

After all it is easier and safer to walk in deepish snow than it is in just a scattering, countries such as Alaska, Norway, Sweden and other northern states manage, and their weather is far worse than ours, and over a longer period.

Have we become defeatist, no buses running in London, no trains running, motorways blocked up, main roads impassable and side roads unusable?

Are we wimps or is it a basic failure of local councils and Westminster?

I don’t know, but I would like to.
“Winter lies too long in country towns; hangs on until it is stale and shabby, old and sullen.” - Willa Sibert Cather